Forgotten Book: Jan Reid, The Bullet Meant For Me 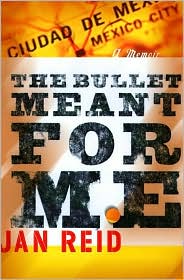 In this 2002 book of nonfiction, writer Jan Reid has written an absorbing and sometimes harrowing account of a life suddenly altered by the shot of a gun in a robbery attempt. The book begins with that incident on a deserted street in Mexico City and ends with a return trip to the scene of the crime years later.

In between, it concerns itself with the author's interest in boxing and his friendship with a young Mexican-American boxer, Jesus Chavez. It's also a meditation on the dynamics of proving one's manhood with high-risk behavior. Reid connects all this with the Texas setting where it mostly takes place.

He tells of growing up in north-central Texas and discovering boxing as a young man, but with no particular self-confidence or promise. Returning to the sport in later years, while working as a writer in Austin, he recovers a sense of purpose that agility in the ring had once given him. He is able to share this feeling of accomplishment for an audience of readers who may have little sympathy for the sport.

While you may never care to put on a pair of gloves yourself after reading the book, you can grant him the validity of his own point of view. The sport, he argues, harnesses physical power with a kind of grace and courage that in a well-fought match can inspire admiration.

How his ability to throw a punch at an adversary determines the outcome of his encounter with an armed robber is not completely resolved in the book. Although the punch didn't connect, he may well have been shot - and killed - anyway. For half of the book, as he recovers some use of his legs with surgery and physical therapy, he endures staggering pain and the uncertainty of the future of his marriage. His achievement is in his coming to terms with all that.

It doesn't give too much away to reveal that he returns to the gym in Austin, on the support of a cane, to put on gloves again. I don't know Reid, and he may be a very different man in person, but he comes across as someone both courageous and the last to admit it. He makes sense of what's happened in his own way, determined to take on adversity even while it means never fully overcoming self-doubt.

The Bullet Meant for Me is currently available at amazon

Coming up: Quenton Reynolds, The Fiction Factory
Posted by Ron Scheer at 5:19 AM