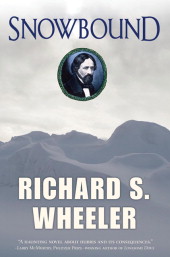 Selected for this year’s Spur Award for Short Novel, this is an account of John Charles Frémont’s fourth expedition into the West, 1848-49. Frémont, as Wheeler admits in the afterword, is a hard nut to crack. He was an adventurer who seems to have required a devoted audience and a national stage on which to play out his adventures.

On one level, his attempt to discover a route for a transcontinental railroad was little more than a stunt. He not only set out across the West’s most forbidding mountain ranges, but he did it in the winter. Told repeatedly that such a trip was foolhardy, he simply refused to listen.

And he wouldn’t turn back, even when it was clear that no railroad could ever be built through the chasms and over the high passes his expedition encountered. He seems to have been driven by a triumphant vision of himself arriving in California, having defied everyone’s belief that it couldn’t be done. Nothing short of that would satisfy him.

By the middle of Wheeler’s novel, that vision is beyond achieving. The entire expedition of 33 men is snowbound in the highest elevations of southern Colorado. Blaming everyone but himself for failure to even reach the Continental Divide, Frémont sends for help. There begins the long disaster of retreat from the mountains as men perish one by one from cold and starvation.

Wheeler uses several point of view characters to tell the story. There is Frémont himself, so full of self-importance and contempt for others, and conscious of the power he holds over his men. Almost woundingly sensitive, by contrast, is a young doctor who begins to doubt Frémont’s leadership as he watches the Colonel’s indifference to the suffering of the pack mules.

The book’s achievement is its portrayal of the physical suffering of the men themselves and the psychic toll of their growing dread. When death finally comes to some, after the last shoe leather has been boiled, it is with a numbing surrender to exhaustion, cold, and despair.


The novel is a harrowing testament to folly. Without saying so, it is also a journey into the dark side of American character. It is the public’s worship of heroic individualism that feeds the ego of a man like Frémont and blinds even those closest to him to his faults. In Wheeler’s portrayal of him, his sense of moral and physical superiority to the other men simply galls. He is a barely disguised sociopath.

Well before Darwin, he is an advocate of the doctrine of survival of the fittest – himself of course the most fitting to survive. The failure of his mission is due totally, he believes, to the “weak” and “soft” men who joined his expedition. Never mind that most of those who die are among his own handpicked “stout-hearted” followers.

As the leader who never makes a mistake, he brings to mind a recent president who attempted to maintain a similar public image. Frémont’s unwavering self-confidence dazzled the men who followed him, as some men will a charismatic leader. And not “weak” men, but those enchanted by the appearance of power and willing to sacrifice themselves to it. Some things, alas, never change.

I'm rarely on the same page with judges of annual fiction awards, but the Western Writers of America have certainly earned their creds with this one. Richard Wheeler is a thoroughly rewarding writer of historical fiction, and I’m glad he chose the West to write about.

Snowbound is available at amazon

, AbeBooks, and Powell's Books, and for the nook.