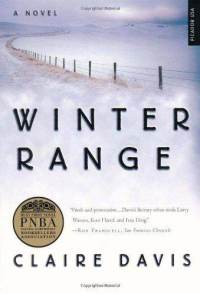 I found this mix of psychological thriller and literary novel about small town/ranch country life really absorbing. The tension that builds in it is intense, as it's hard to anticipate just what extremes of behavior the author is going to permit her characters. That the characters are fully three-dimensional and believable adds to that intensity.

I was often able to read only a chapter of this novel at a time. The prose is often poetic, and the internal explorations of character, feelings and motives, are meant to be taken in slowly and deliberately. I sometimes put down the book after a particularly chilling or revelatory scene with a reluctance to go on because the knowledge of characters and their intentions was so raw.

This is a dark and beautifully told story about a rural community, set in its ways and distrustful of outsiders. Values have been shaped by generations of struggle to make a living from cattle and agriculture, which are at the mercy of the weather, markets, time, chance, and accident.

Government and, to an extent, the law are regarded as impositions on a natural order that took shape over a century ago. Ike, the sheriff, is thrust in the middle of that conflict between old and new. Meanwhile, the decisions he has to make are complicated by his marriage to a local ranch girl with a reputation for being "wild" in her youth.

Anyone with intelligence and single-minded rebelliousness who has grown up in that kind of environment and chose to stay will understand the ambivalence of his wife, Pattiann. Anyone reading the headlines of shooters in shopping malls will recognize the blinding rage of Chas, who has no more compassion for himself than he does for his victims, which include his cattle and his horse.

His goading of Ike is equal parts revenge and suicidal. Revenge for Ike's marriage to the "wild girl" he once knew, who grew up to become the sheriff's wife. Suicidal because he is able to twist Ike's commitment to the law to force each of their hands. A psychological chiller that ends on the frozen wastes of the Montana prairie.

Winter Range is available at amazon, AbeBooks, Powell's Books, and bookcloseouts, and for the nook.

Coming up: Richard Wheeler, Snowbound
Posted by Ron Scheer at 5:48 AM