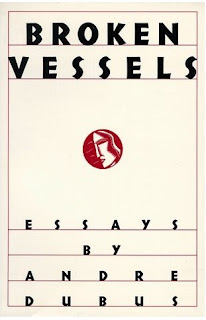 Andre Dubus died in 1999, at the age of 63. He wrote short stories and essays, in a steady, straightforward style in a voice that seemed to come from the heart itself. This collection of essays, written between the years 1977 and 1990, tells of his boyhood in Louisiana, his years as a marine, and his life as a student, writer, teacher, husband and father.

The title of the book refers to an accident in 1986, when helping a stranded motorist on a dark highway in Massachusetts, Dubus was struck by another car. Losing one leg and the use of the other, he never walked again.

His essays on running, playing baseball as a boy, intervening in an assault of a teenage girl by her boyfriend, a cross-country train trip, yield to descriptions of physical therapy and learning to live in a wheelchair. You read page after page of this account, and you look at your own legs, suddenly glad for them and aware that you may never take them for granted again. You may not take yourself for granted again either. Dubus can have that effect on you. 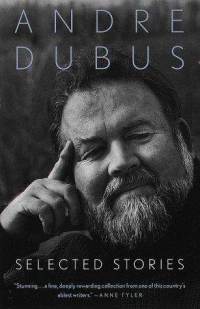 He is a mixture of a very proud man who is also humbled by what reflection reveals to him of life's meaning. A practicing Catholic, his writing exhibits a strong moral sense. He reaches consistently for a single, coherent perspective from which to see and understand everything.

In an age of hype and self-promotion, his sense of himself as a writer seems very old-fashioned. He wonders, for instance, how the quality of writing is affected when you do it for money. Or, as in The New Yorker, your words appear next to advertisements for luxury products.

A celebrator of friendship, he speaks fondly of the men who are his friends. And he shows a strongly democratic spirit in the respectful attention he pays to the conversations of laborers and Amtrak crew members. He speaks less freely about his love for the women in his life, as if to say much would betray intimacies.

His son Andre Dubus III became a novelist in his own right. Recently his memoir, Townie, about his relationship with his father, has received warm reviews. Dubus senior has another equally fine collection of essays, Meditations From a Movable Chair. A collection of his stories includes "Killings," which was made into a film, the dark melodrama In the Bedroom. All these books are still in print.

, AbeBooks, Powell's Books and for the nook.