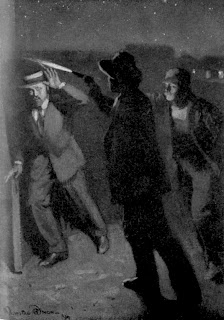 Hat tip to Walker Martin who put me onto this author. Francis Lynde (1856-1930) was a prolific writer, with short fiction appearing in magazines like Munsey’s as early as 1894. A decade later, he began a long relationship with The Popular Magazine.

By 1910 when The Taming of Red Butte Western was published by Scribner’s, he’d already published six novels, plus a couple dozen titles in the magazines. In later years, three of his stories would find their way to film. I’ve now told you all I know about the man.

The plot. This is not a cowboy western, but an adventure story set in the west. The Red Butte Western of the title is a railroad line that runs across expanses of desert and mountain in the Southwest. You might call this one a rogue railroad, as it has been run rather fast and loose by dishonest men. Howard Lidgerwood, in chapter one, is reluctantly persuaded by the railroad’s new owner to whip it back into shape.

Lynde’s is a men’s world. There are 40-50 named male characters, nearly all of them employed by the railroad. Many have a checkered past. All that’s required of a man to survive in this outpost is “nerve and a good gun” (p. 35). Lynde swiftly sets up the initial conflict, and tensions quickly build. For starters, there is mystery aplenty. The railroad is the victim of sabotage and there’s only circumstantial evidence pointing to the perpetrators.

Trying to enforce reforms, Lidgerwood earns the ill will of many of the employees. He is first lampooned by them, then threatened and shot at by a gunman whose brother he has fired for dereliction of duty. Then he begins uncovering fishy details about a building and loan scheme that has left disgruntled investors empty-handed. All of this is just a sample. 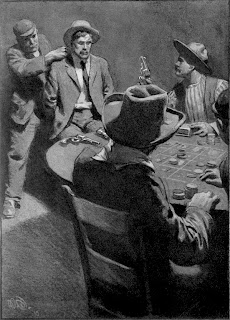 Character. Lidgerwood is in the West partly of necessity, but Lynde is vague on the details. What we do know is that he is haunted by a sense of inadequacy and failure – in a word, cowardice.

He struggles with his temerity, while holding to a code of civilized behavior. He will not, for instance, fire another man simply for having a bad attitude. The man has to be guilty of some malfeasance. Likewise, he will not carry a gun, though frontier conditions clearly prevail in the settlements along the railroad.

Finally, the West is both the education and testing of the man. In attempting to “tame” the railroad, Lidgerwood is determined to set right what is wrong, no matter the consequences. And he will do it without compromising his principles. Proof that he is not a coward comes when he is willing to surrender his life rather than yield to murderous and uncivilized villains.

Girl trouble. Eleanor Brewster, the romantic interest in this story, is hardly a sympathetic creation. Like other girls of her social position in other novels, she is girlishly willful and more than a little obtuse. It is a mystery what Lidgerwood has ever been attracted to in her.

From the moment she appears in the novel, she speaks to Lidgerwood with a mocking and scornful tone. No matter how gracious and patient he tries to be as her unwilling host and protector, she is forever finding fault with him. Still, he finds her irresistible.

It’s hard to tell what Lynde is up to with her. Her banter reads as playful teasing meant to mask a deeper hostility – not for men in general, but specifically for Lidgerwood. He seethes with anger as she warms to a man more physically robust and domineering than himself. 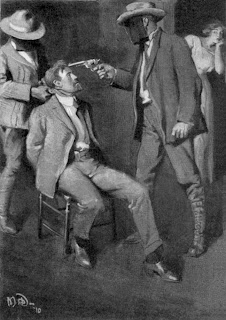 Wrapping up. This is an exciting and suspenseful novel. The plot has both mystery and action. Its portrayal of railroading is informed and informative – entertaining, if not absorbing for the trainspotting rail enthusiast. You learn, for instance, what happens when a train wrecks and how the wreckage is cleaned up afterwards and the derailed locomotive set back on the tracks.

The novel takes its place among a wave of early western novels in depicting the West as a boundary land of lawlessness. In the severity of its living conditions, it is also a place where a man develops strength of character and proves his manhood.

Still in the debate between East and West, its sympathies are with civilization, despite its discontents. The inhabitants of Lynde’s western landscape are mostly bad apples, untamed. The landscape itself is inhospitable.

At novel’s end, Lidgerwood’s future lies somewhere back East, with the probable marriage to the perpetually teasing Eleanor. It’s an ending for a particular kind of reader who regards the West as a locale for adventure, maybe a nice place to visit but not a place to live.

The Taming of Red Butte Western is available online free here and at AbeBooks.

Image credits: Illustrations from the novel by Maynard Dixon

Coming up: Axel Brand, The Dead Genius
Posted by Ron Scheer at 10:14 PM