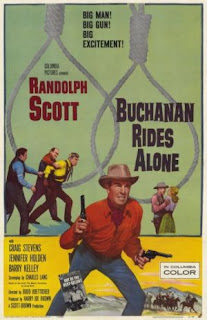 What you immediately notice in this Boetticher-Scott western is that Randolph Scott is smiling most of the time. His character, Buchanan, is dead serious behind that smile, but he's "alone" in a bad border town, and the smile is open admission that he's outnumbered from the start. Gotta go along to get along.

It’s a family-run town. The businesses, the hotel, and law enforcement are all in the hands of the Agrys. Services are expensive--everything seems to cost $10. Scott casts a passing glance at a blonde in the saloon as he makes this observation. All of them ethically compromised, two Agrys eventually fall out over the promised payment of $50,000 for the release of a Mexican prisoner. The young man has killed the ill-behaved son of one of them, apparently over the assault of a woman.
Scott gets involved because he’s already been aggravated by the victim, a mean drunk, and comes to the young Mexican’s defense when Agry henchmen gang up on him. There’s a quickly organized trial, and very shortly both end up with ropes around their necks.
What follows is a swiftly moving chess match, as the offer of a ransom brings a halt to the hanging.  Buchanan is released only to be attended in his departure from town by two men with instructions to kill him. One of them a Texan (L. Q. Jones) is a friendly sort and draws the line at killing another Texan. Soon he’s switched sides and is helping Buchanan get the Mexican safely back to Mexico.
In a closely plotted story that is far from over at this point, greed sets two of the Agrys at each other’s throat. Meanwhile, the prisoner is retaken and becomes a pawn in their attempts to outwit each other. Buchanan is called upon again for some quick thinking, and a final shootout leaves the street littered with corpses.
Craig Stevens (aka Peter Gunn) is a gunslinger dressed in black who gets mixed up as something of a bodyguard for one of the Agrys who’s running for public office. Dressed appropriately in black, he’s cool and professional. Clearly the smartest one of the lot, he’s capable of doing a better job of running the town than the Agrys. In the last scene, as one of the last ones standing, he gets his chance. Buchanan wishes him well with a smile, and rides off—alone.
Scott with his craggy face, mellow deep voice, and smooth physical presence is a pleasure to watch as usual.  L. Q. Jones, with his authentic western drawl, is a comic delight. The dusty border town and desert landscape look good and authentic, too. Neatly plotted, the story unfolds at a brisk pace. Lighter in tone than his other westerns, it’s another Budd Boetticher gem.
Buchanan Rides Alone is currently available at netflix and at amazon. Overlooked Movies is a much-appreciated enterprise of Todd Mason over at Sweet Freedom.
Photo credit: Wikimedia Commons
Coming up: James Oliver Curwood, The Courage of Captain Plum (1908)
Posted by Ron Scheer at 7:00 AM