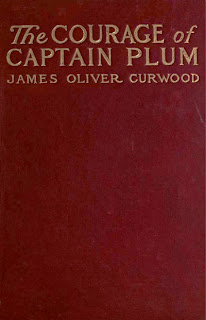 An early example of pulp fiction, this is one heck of a potboiler. Set in 1856 on an offshore island in Lake Michigan, it’s a fevered and high-pitched adventure story that pits a young man, Nathaniel Plum, against a colony of Mormons. The entire story takes place within 48 hours and includes blood-curdling scenes of torture, pursuit, imprisonment, and death by execution.

That’s not all. Well mixed with all the adrenalin is a head-spinning concoction of romantic and sexual appetites. James Oliver Curwood (1876-1927) has given us a book intended for just about every prurient interest.

Far-fetched as all this may sound, it has some basis in history. A splinter group of LDS faithful, under the leadership of James Strang, did in fact not follow Brigham Young to Utah in 1846. Claiming to be the true church, they remained behind on Beaver Island in Lake Michigan, with Strang proclaimed as their “king.”
In the novel, Mormons are a nasty cult, and Strang is their cruel spiritual leader and monarch. Charismatic and cunning, he is a violent tyrant, with six wives and plans for a seventh. While his name suggests the stranglehold he has on the hearts and minds of his followers, he also has a reputation as a ravager of peaceable settlements elsewhere.
Plot. Plum, the young captain of a sloop loaded with barrels of gunpowder, comes ashore on the island with plans to put Strang out of business. In short order, he meets an old man with all the signs of lunacy, spies a pretty girl, Marion, and instantly falls in love, and intervenes in the public flogging of a young man who turns out to be Marion’s brother, Neil.
The two men escape through island marshes with baying bloodhounds in hot pursuit. By evening, there’s a full-scale attack on the island by a force of combatants from the mainland. The Mormons beat them back and take Nathaniel and Neil prisoner. Thrown into a dank cell, they await certain execution.
In all this, Plum learns that Marion is to be married to Strang, but that she will commit suicide rather than be the man’s unwilling bride. The young captain is distraught. Taken from the prison in the dead of night, the two men are rowed to the mainland where they are tied to stakes and left to die from strangulation, choked by leather thongs around their necks.
At the point of death, they are saved by Marion and Neil’s girlfriend, Winnsome. Returning to the island, Plum arrives in time for yet another armed assault, this time by a force of U.S. soldiers. Strang is taken, an old man who has befriended Plum is shot and dies after a long confession, and Plum and Marion fall into each other’s arms professing their undying love.
Mormonism. Historically, the novel is set at a time of open hostility between the U.S. government and the Mormons. The Mountain Meadows Massacre occurred the following year, in 1857. Meanwhile, the practice of polygamy had become illegal in Utah only as recently as 1890, within the lifetime of most of the book’s readers.

The fictionalized group of Strangites and their armed conflict with their neighbors harks back to the “wars” that drove the Mormons out of Missouri and Illinois in the 1830s-40s.

As Curwood represents them, they embody the darkest imaginings of the general public—cruelty, violence, and sexual excess. Except for brief references to Joseph Smith and Mormon settlements in Kirtland, Ohio, and Nauvoo, Illinois, he shows no evidence of having researched Mormonism itself.
The open contempt for Mormons in a mainstream work of popular fiction would strike many today as surprising. Even in other turn-of-the-century novels set in the West, Mormon characters are often part of the social fabric, but seldom if ever as villains.
Zane Grey is an exception. In his first novel Heritage of the Desert (1910) he regards Brigham Young’s followers with a jaundiced eye, and in later novels he’s clearly unsympathetic. Read with other western novels of the time, The Courage of Captain Plum reveals more than a little about the stereotypes of Mormons a western writer could expect among readers.
Is it a western? Only by a hair, if at all. Mormons are readily associated with the frontier West. Also, certain scenes and incidents could easily occur in a western novel. The island settlement is surrounded by water rather than desert or mountains, but the element of isolation is much the same. Villainy is free to imperil the lives and welfare of others, and the hero who confronts it here is armed with a six-gun.
American-born, Curwood went on to write a great many novels about the Canadian and Alaskan wilderness. His heroes are often Northwest Mounted Police, and his most popular creation was the dog Kazan in Kazan, the Wolf Dog (1914). A prolific writer, he wrote almost 200 stories that also found their way to the screen, over 60 of them after his death.
The Courage of Captain Plum is currently available at google books, and for kindle and the nook. Friday’s Forgotten Books is the bright idea of Patti Abbott over at pattinase.
Illustrations: Frank E. Schoonover
Coming up: Old West glossary, no. 21
Posted by Ron Scheer at 7:00 AM