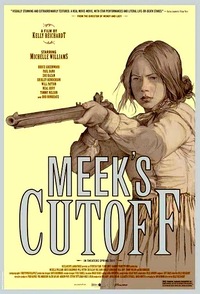 Imagine a western without a single western cliché. This one comes close. If it used documentary camera techniques, you’d call it a docudrama. But in fact a large part of the film’s effect is the artistry of the cinematography and editing, plus a haunting music track.

The plot of the film is based on an actual journey of emigrants by wagon train across Oregon in 1845. In the film, three families are traveling over high desert terrain, led by a Buffalo Bill-style scout called Meek (Bruce Greenwood), who may or may not know where he’s taking them.

The group dynamics begin to shift as some of them lose confidence in the blowhard Meek. One of the wives (Michelle Williams) has yielded, like the other wives, to the will of their husbands, who do all the deciding. But she doesn’t pretend to like or respect Meek. Eventually they lock horns.

Running low on water, with no sign of an anticipated mountain range ahead, they encounter a lone Indian in beads and buckskin leggings. After he is captured, Williams and Meek disagree over whether to kill him or keep him alive. Meek considers him dangerous, but she and others hope that he can lead them to water.

The difficulty is that neither understands a word of the other’s language. The Indian leads them onward, but it is never clear that he is taking them where they want to go. Meanwhile, one of the families relies on the good will and protection of the God they pray to. The wife of one man loses heart and panics, wanting only to go home. Another man falls ill.
With the loss of one wagon, they quickly regroup, generosity and helping each other coming as readily as the expected mercy of God. But their blithe acceptance of adversity and uncertainty is not assurance of eventual deliverance from the growing dilemma of their situation. They are lost in a harsh, uncharted land.

The film sloughs off all the Hollywood and textbook myths about transcontinental emigrants and leaves you with the more likely reality of the actual experience. Long takes and slow tracking shots mirror the slow, tedious process of covering hundreds of miles on foot. Shown sometimes as tiny figures moving across a serenely empty landscape, they appear plainly vulnerable to unspeakable dangers.

The startling effect of the film is the way it cuts you off from all the comfortable expectations of the Hollywood western. The most comforting of those is the element of story itself. Real life, someone has said, has lots of beginnings, some middles, and rarely the endings we are used to from fiction.

While there are plenty of story elements (character, setting, conflict), they keep dissolving into a formlessness that is more like life. You realize that if they ever reach their destination, there will be no ending and no happily ever after. Life will continue on as it has for them, rife with uncertainties and lack of resolution.

Without the usual conventions, Meek’s Cutoff puts the audience into terra incognita, just like the characters in its story. Watching it, you literally have no clue what if anything is going to happen next. It’s a strange, uncomfortable, but illuminating feeling. If the western is in fact entering a renaissance, Meek’s Cutoff is a doorway out of the dusty storehouse of overused western clichés into something new and excitingly different.

Further reading: An account of the 1845 emigrant train led by Meek
Photo credit: Wikimedia Commons
Coming up: Caroline Lockhart, Me—Smith (1911)
Posted by Ron Scheer at 7:00 AM