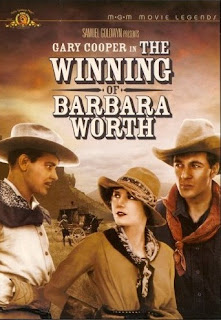 Harold Bell Wright’s popular novel, The Winning of Barbara Worth (1908), was a challenge to adapt to the screen. Its climax involves a devastating flood as the Colorado River inundates the California desert and wipes out a town and the reclaimed land around it.

Under Henry King’s direction, this silent film manages to amaze with its primitive visual effects. A tsunami of surging water destroys buildings and sends people fleeing on foot and on horse-drawn wagons and carriages. The most dramatic moments in this prolonged scene seem inspired by Eisenstein’s Odessa Steps sequence in Battleship Potemkin (1925).
As in the book (reviewed here recently), it’s a rather long wait for all that excitement. Lead performers Ronald Colman and Hungarian actress Vilma Bánky are supposed to have a big romance. He is chief engineer of the reclamation project, an outsider from New York. She is a local girl, raised by a banker who found her as a child in the desert beside the body of her dead mother.
Colman is charmed by her; she lacks or feigns to lack interest in him. Hard to say which. There’s every chance she will be the sweetheart of another young man, a surveyor played by the young Gary Cooper.
It’s Cooper’s performance that probably accounts for the film’s existence today on DVD and its screening on TCM. Lean, tall, and even taller in his high-crowned hat, he was all of 25 years old and in his first big role. The camera clearly likes him, and he nearly walks away with the picture.
More “western” in many ways than the book, the film gives us many images of riders on horseback and mule teams pulling wagons. An ambush in a canyon is played for all the excitement of men with six-guns, horses, and cowboy hats. As one man is left behind badly wounded, the other races across the desert to deliver a payroll before angry workers revolt.
The fairly complex story in the novel is trimmed down to its basics. The venture capitalist from New York, whose reckless cost cutting causes the flood, nearly drowns. He survives so covered with mud he’s unrecognizable. Colman stops the flow of water from the river and, after saving the day, learns that he is the true love of Barbara. Cooper has to settle for the consolation prize, her sisterly affection.
An ambitious spectacle, The Winning of Barbara Worth was shot mostly on location in Nevada and offers an entertaining journey into the Golden Age of Hollywood silent film. The print is crisp, many scenes are appropriately tinted, and the organ music track is spirited. It is currently available at netflix and amazon. Overlooked Movies is a much-appreciated enterprise of Todd Mason over at Sweet Freedom.
Photo credit: Wikimedia Commons
Coming up: Paul St. Pierre, Smith and Other Events
Posted by Ron Scheer at 7:00 AM