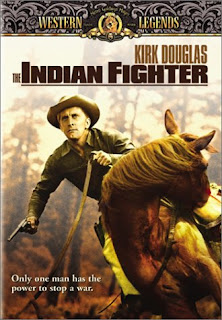 This western has a lot going for it. Shot in beautiful wooded mountains, and resplendent in Technicolor and CinemaScope, it’s a story about whites and Indians. Kirk Douglas stars, with Walter Matthau and Lon Chaney cast as villains.

Douglas is the Indian fighter of the title, tough and well muscled, and showing it by taking off his shirt for a while. Though he has a reputation as an Indian fighter, he mainly occupies himself with attempts to broker a peace between Indians and whites. Playing the self-assured kind of character he patented, he often delivers lines with a gleeful leer.

Matthau and Chaney are plausible as clumsy and not-so-bright outlaws. Elsa Martinelli is the statuesque daughter of the chief, and Diana Douglas (Kirk’s former wife) is a widow headed for Oregon in a wagon train with a small son. She’d like to persuade Douglas to settle down with her there and plant fruit trees.

For added value, Ben Hecht had a hand in the script, which may account for the few moments of humor. In an exchange between Douglas and Eduard Franz as Chief Red Cloud of the Sioux, Douglas explains that whites have been recently occupied fighting a Civil War.

Red Cloud: We were hoping you’d kill off each other.
Douglas: Didn’t last that long.
Red Cloud: Too bad.

The film is pretty to look at—the Sioux in their feathered headgear are particularly impressive. But as the story involves some steamy relations between Douglas and the chief’s daughter, Onahti, it begins to run aground.

Plot. The main action of the film concerns the safe conveyance of a wagon train of settlers across Sioux territory in Wyoming. The Sioux are willing to be reasonable about the intrusion of whites, as long as they don’t hang around corrupting the natives with whiskey or go digging up the landscape for gold.

This is exactly what Matthau and Chaney are up to, however, and they cause enough trouble on their own to precipitate what turns into a near massacre. The Indians’ first overtures to the whites are a peaceful attempt to do some trading. But the nervous whites panic, and before long they are holed up in the cavalry fort, the chief’s brother has been killed, and the fort is under attack.

Douglas has to bring peace somehow, or the whites will be annihilated. And this is where the whole film gets sticky. Douglas has seduced and forced his attentions on the chief’s daughter, who finds his handsome white self and rough lovemaking irresistible. The couple is particularly drawn to water, and one scene finds them threshing around amorously in a flowing mountain stream.


Douglas, in fact, is as much to blame for the white-Indian troubles as Matthau and Chaney. His play for the chief’s daughter makes him absent without leave when the cross-cultural relations deteriorate.

Escaping from the embattled fort undercover of night, Douglas finds his Indian maiden and they confront the chief with their intention to marry and raise little Douglases. Shaken by the loss of his daughter to a white man, Red Cloud calls off the siege and retreats. In a final shot, Douglas and Onahti have found another stream and are floating off together with the current, all smiles.

Wrapping up. Despite all the watchable aspects of the film, its portrayal of a squaw man’s interracial romance really dates it. Clearly, the film wants to be entertaining, even multicultural. But only with a willful denial of history and racial stereotypes could a viewer escape feeling a little squeamish.

Elisha Cook deserves a mention here as a photographer excited about capturing the whole West with his camera. He claims to have learned the art from Matthew Brady himself. That’s a nice twist, although the film somewhat oversimplifies the cumbersome process of photographing in the field.

Elsa Martinelli, who glides through the scenery like a fashion model, was in fact a model, from Italy, who was to have a considerable career as an international film star. TV actor Frank Cady (Green Acres, Petticoat Junction) joins the villains for a while, as a partner in crime with a mobile dry goods operation called Trader Joe.

Alan Hale (Gilligan’s Island) appears as a fruit-tree obsessed suitor for the hand of Diana Douglas. Hank Worden does double duty in two small roles, one of them Indian. In fact, it’s hard to say whether there are any Native Americans in the cast. And those with speaking parts clearly have a good command of English.

Some fancy stunt riding is featured in an early reel when Douglas and an Indian engage in a tomahawk-swinging contest on horseback. The film was shot on location near Bend, Oregon.

The Indian Fighter is currently available at netflix and amazon. For more Overlooked Movies click over to Todd Mason’s blog.

Coming up: Marguerite Merington, Scarlett of the Mounted (1906)