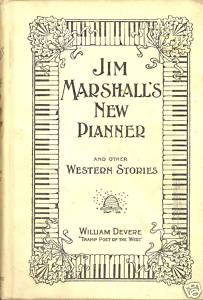 William De Vere (1844-1904) called himself “The Tramp Poet of the West.” His doggerel verse celebrated the life of mining camps, usually observed from the four walls of a saloon. The “stories” promised by the title of the book are often character sketches of the poet’s drinking buddies and acquaintances. About tramping itself, there’s not a great deal.

The title piece, “Jim Marshall’s New Pianner,” tells of the arrival of a much-awaited piano at a tent saloon in a San Juan mining camp in Colorado called “The Needles.” Much to everyone’s chagrin, there’s not a soul among them who knows how to play it. Just then, a stranger walks in, a tramp, who takes a seat at the instrument and bangs out an impromptu concert of popular songs that sends his listeners into paroxysms of delight.

The chief interest of the poem is the list of late 19th-century tunes that make up the program, ranging from “Comin’ Through the Rye,” “Little Annie Rooney,” “Stick to Your Mother, Tom,” and “Johnny Get Your Gun” to snatches of Aida. Finished, he walks out again without a word. 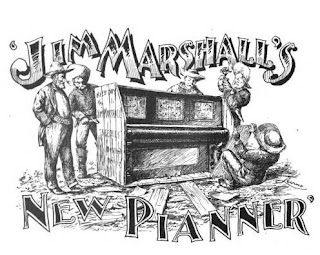 In “Kinder Susp’shuss,” a stranger walks into another saloon, sets up a camera and proceeds to take a photograph of the assembled throng. The click of the shutter surprises the customers, who mistake it for the cocking of a pistol. The photographer and his camera are quickly the target of a fusillade that pulverizes them both.

While practitioners of fire-and-brimstone religion get little respect among this crowd, “The Parson’s Box” tells of a “sky pilot” in Durango, Colorado, who wins their approval. His gospel is light on law and heavy on forgiveness, and his sermons and prayers are nicely short. Most effectively, he warms them with a sentimental word about their families and sweethearts back home.

After the prayer, one listener, with tears in his eyes, passes a hat. When the parson leaves, the men put up a box on the saloon wall, where they make a practice of chipping in a share of their faro winnings. And on Sundays they close down for an hour to go to his church. 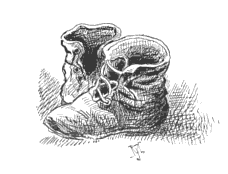 Most famous. De Vere was remembered chiefly for two poems. The first is a reportedly autobiographical account of his return to the mine fields from Denver where he had squandered a fortune in gold during the previous winter. Berating himself, he turns down a ride in a teamster's wagon to walk behind it in the dust as punishment for his stupidity. “Walk, jist walk,” he tells himself.

The other, “Two Little Busted Shoes,” recounts a moment in Soapy Smith’s Orleans Club, in Creede, Colorado, where the poet has stored his trunk. Opening it, he reveals to the assemblage of patrons a pair of “busted” shoes belonging to one of his children. The sight of them puts them all in a pensive mood as their thoughts travel homeward to the loved ones they have left behind, who depend on their safe return. 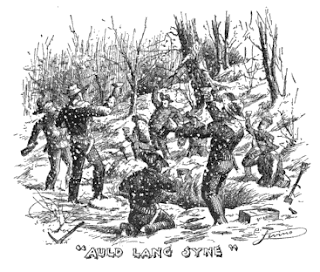 Another poem set in Creede, “Jeff and Joe,” is dated March 27, 1892. It’s a tribute to the friendship of Soapy Smith and gambler Joe Simmons. After 30 years together, the poem goes, and loyal to each other through thick and thin, Jeff visits Joe’s deathbed. Reviewing his life, Joe asks if he’s ever done another man wrong, and Jeff assures him that he hasn’t.

Later, the crowd that has assembled at Joe’s grave carries out his last wishes, passing around bottles of Pommery Sec champagne to toast his departure and singing “Auld Lang Syne.” And the poem ends:

They drank an’ sang. The pure white snow
Fell softly on the grave of Joe. 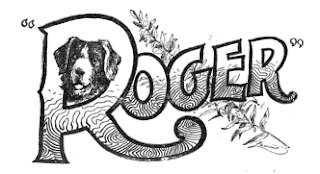 Another poem, “Roger,” is a tribute to a dog that’s been a faithful companion to the poet in places all over the map, from Dodge City to Butte to Santa Fe. Roger, we learn, has saved the poet’s life by once waking him from a drunken slumber while his shack had caught fire.

Altogether, the poems capture something of the frontier as it was found in the mining camps of the lawless Old West. The point of view in them is that of the “tramp,” the itinerant and wanderer. Maybe prospector or preacher, he is typically some kind of gambler:

When the big excitement came
Every man that played a game,
Square or sure, that could succeed,
Packed his grip and went to Creede.
Gamblers, miners, suckers, marks,
Spieler, macers, bunco sharks,
Men of money, men of greed—
Every one fetched up in Creede.

In the preface, De Vere claims that it’s all true; it all happened; and no names have been changed. Much of it seems observed through an alcohol haze, softened and romanticized by a heavy dose of nostalgia. The title poem ends by accounting for each of the men who marveled at the concert they were treated to by the unknown pianist:

The Needles camp is busted, “Burrell Wade’s” in Kansas City,
“Tom Kane” shot “Riley Lambert,” and was “strangled,” more’s the pity
“Clabe Jones” is down in Mexico, a stealin’ Texas meat,
And “Walter Fletcher’s” writin’ songs in Forty-seventh street.

“Cap. Flagler’s in Durango. I am dallying with the drama,
“Jim Marshall’s jumpin’ corner lots, way down in Oklohoma,
“Lish Rowe” he takes his Bourbon straight, when he goes on a bust,
“Tom Gretto’s” out in ’Frisco, still looking for the dust,
“Old Creek” is up in Ogden, and the saints snared “Tommy Tanner,”
And a dance hall up in Rico captured Marshal’s “New Pianner.”

Wrapping up. An acquaintance, Henry Clay McDougal, remembered De Vere as a man who had been “a teacher, bar-tender, preacher, prospector, miner, poet, mine-owner, reporter, Bohemian, editor, cowpuncher, drunkard, actor, merchant, saloon-keeper, trader,” who had made and lost a fortune in the mines.

A notice in the February 6, 1904, Deseret News reports that “Big Bill” De Vere has been found dying at an address on 13th Street in New York. The article speaks of his reputation as a poet, earned over the previous twenty years. It also reports his age as 74, when other sources indicate he would have been only 59 or 60.

The writer remembers him as having led an adventurous and colorful life in the West, first as a gunslinger and then as a sheriff in Colorado. “Many a murderer,” the story goes, “has De Vere taken with his revolver and his hands, and he bears upon his person the scars of countless battles.”  Next he ran a Denver gambling house and opened a theatre, where “his burlesques and afterpieces were famous throughout the west.” In 1879, he also had a theatre in Leadville called The Comique.

At one time, readers are reminded, De Vere was boss of the Budweiser saloon in Spokane. He was also celebrated in a stage farce by Charles Hoyt called A Black Sheep, where he appeared as a fat, gun-toting editor of an Arizona newspaper. De Vere had two daughters, Frisco and Denver, named by him after the cities.

Jim Marshall's New Pianner is currently available at google books, Internet Archive, and for the nook. For more of Friday's Forgotten Books, click on over to Patti Abbott's blog.

Image credits: Illustrations from the book