Marguerite Merington, Scarlett of the Mounted (1906) 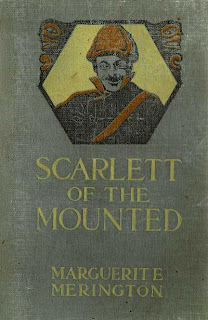 It’s as if Merington conceived her story as a farce meant for the stage but wrote it as a novel instead. The scenes unfold as comic drama, with a cast of characters and action that is chiefly dialogue. As a book or a play, it works either way and is laugh-out-loud funny.

Plot. The setting is a mining camp in the Klondike called Lost Shoe Creek. The central character is Sgt. Scarlett of the NWMP, whose assignment out here in the gold fields is to track a band of thieves who are headquartered across the border in the U.S. and operating in Canada. His job is also to prevent the sale and consumption of alcohol, both of which are prohibited in the Canadian territories.

The camp is infested with questionable characters. Among them is a blackguard, Blenksoe, and Nick Bully, a ruffian who lives up to his name. During the novel Bully is extradited to the U.S. for shooting a deputy U.S. marshal.

Bully has a daughter Gelly of marriageable age, whose sometime boyfriend is Dandy Raish, a scheming claim jumper. Blenksoe and Dandy keep their eye on a prospector Lucky Durant, a man who has made and lost fortunes and, though he is currently broke, can strike it rich again.

A minister, Maclane, works diligently to save souls among the miners, and mostly for local color there’s Gumboot Annie, a brassy saloon owner. An Indian trader named Chilcat Jo whittles miniature totem poles and has his own aspirations to take Gelly for his wife.

Bursting into camp comes Lucky’s daughter Evelyn and an entourage of man-hungry single women she calls her Orphans. Evelyn, an American, has lived all her life wanting for nothing, sent to the best private schools, all paid for by her father. She has come to visit him, whom she expects to find living in luxury.

Not wanting to be found penniless, Lucky ducks town, and everyone covers for him to save embarrassment for both father and daughter. Expecting his luck to turn, Lucky disappears into the surrounding terrain in search of another paying claim.

Romance. Sgt. Scarlett is smitten by Evelyn but events conspire to frustrate romance. She has acquired an assistant who calls himself Travers but is in fact Dandy. When he believes Lucky has made a strike, he plots to kidnap both father and daughter and hold them in exchange for the claim.

In a plot twist too complicated to explain plausibly, he persuades Evelyn to temporarily marry him. As the only authority able to grant a marriage license out here on the far-flung Canadian frontier, Sgt. Scarlett refuses to do the honors.

Within a stone’s throw of the American border, Evelyn and Dandy are about to cross into the U.S. to get married, when Dandy’s girlfriend Gelly shows up. Both she and her father, Nick, object to the couple’s plans, and Chilkat Jo puts a stop to it all by firing a bullet through Dandy.

The passing of a year brings a semblance of civilization to the camp. The Orphans have found husbands, and Evelyn has gone into the real estate business. When her father finally appears, he explains that he’s found the gold mine of his dreams but thanks to a memory malfunction he can’t remember where it is.

Turns out, it’s on a spot that Evelyn already owns. When she learns that the truth about her father was kept from her to save her embarrassment, she forgives everyone in camp for their good intentions. Everyone, that is, except Sgt. Scarlett. It takes a final change of heart for her to take him to her bosom.

Character. Sgt. Scarlett is a comic version of that Canadian combination of manly virtues to be found in frontier lawmen. Fundamentally decent and incorruptible, he commands respect without having to reinforce it with a gun. The long arm of the law reaches from the very throne of England, and that seems to carry weight enough.

He makes an interesting comparison with the U.S. marshal of the period. As a representative of civilization, Scarlett is civilized himself. In his uniform, he is a member of a military-style police force with ranks and grades of authority. The U.S. marshal, though part of a large organization, has more the character of a lone enforcer of the law. Skill with firearms also makes him more intimidating.

Both men operate with a level of intelligence that makes them more than a match for the outlaws they are up against. They each are mentally and physically equipped to persevere and get their man. But Sgt. Scarlett, a kind of Dudley Do Right, is too decent to be intimidating. The outlaws in this story are mostly undone by their own stupidity. And instead of getting his man, Scarlett gets the girl. 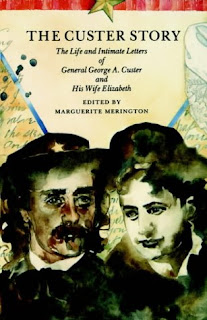 Wrapping up. The novel is by no means a sentimental romance. Every turn in its story is played for laughs. A New Yorker, Merington brings a sophisticated sensibility to her material. Chaplin in The Gold Rush (1925) found comic material in the same subject matter, but he left plenty of room for poignance.

Marguerite Merington (1857-1951) is remembered chiefly as a playwright and as a pianist and composer. After the success of her first play, Captain Lettarblair (1892), her stories and poems began appearing in Harper’s and other slick magazines.  Many more plays appeared in the decades that followed. She was friend and literary executor of Elizabeth Custer, editing a collection of letters written by her and her husband, George.

Scarlett of the Mounted is currently available online at Project Gutenberg, and also for kindle and the nook. For more of Friday’s Forgotten Books, click on over to Patti Abbott’s blog.

Illustrations: A. duFord Piney, for the 1906 edition