Frederick Thickstun Clark, In the Valley of Havilah (1890) 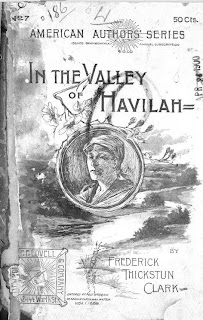 This dark portrayal of an itinerant family in California begins as broad and farcical satire, gathers to it the elements of romance, and then swerves at the end into tragedy. The Havilah of the title is a mining camp in the southern Sierras of Kern County and the vast mountainous region around it, through which flow the Kern River and its tributaries.

Only a handful of characters appears in the novel. There are the Pugsleys, father, mother, and two daughters. Each is portrayed in the most unflattering light. Pugsley is a lazy drunkard and his wife is a complaining invalid of no precise ailment or disability. The elder daughter, Maria, dominates the family with open belligerence. The younger daughter, Maud Eliza, stupidly snorts and chortles at every opportunity.

Plot. Traveling by covered wagon, they become mired in the mud, and they are rescued by a cheerful young gold miner, Billy Bling, who takes them into Havilah. Generous to a fault, he puts them up in a small cabin he owns there. In the short time it takes to know them, he falls head over heels in love with Maria.

Only one other character plays a role in the story. He is Billy’s friend Hulse, an older man who is something of a recluse, known suspiciously in the camp as a book reader and atheist. There’s a rumor that he murdered someone back East. He is a silent but fiercely powerful presence. Not used to being intimidated by anyone, Maria is shaken when she lays eyes on him.

Billy, it turns out, owns a mine that is making him rich. He gladly brings the Pugsleys food and improvements for the cabin. Pugsley presses Maria to marry the young man. A wealthy son-in-law would mean never having to do another day’s work, though Pugsley seems to have done few of them, as it is.

But Maria’s self-confidence has been undermined by Hulse. Shamed by her unladylike behavior, she commits herself to becoming a better woman. Learning that Hulse is a book reader, she even weighs the relative benefits of learning how to read.

To Billy, she is perfection, and he wants her for a wife. But he grows increasingly distressed as she insists that he can only be her friend. When he learns her secret, that she is hopelessly in love with Hulse, despite the man’s evident lack of interest in her, Billy surrenders her to him—anything to make her happy.

But when Hulse does not leap at the chance to wed Maria, in fact disdains her, Billy feels the young woman has been insulted. And to protect her honor, he can see no alternative but to challenge the man to a duel. Following that turn of the worm, everything ends badly.

Character. You keep expecting Hulse to emerge as a man of character in the novel. Educated and somewhat refined, he knows that people consider him more than a little insane. And he’s not so sure they’re wrong. Where he comes from and how he came to be so far from home in the gold fields of California remain a mystery to the end of the novel.

His indifference to Maria and his tolerance of Billy reflect an intensity of self-absorption that can’t be fathomed. Welcoming death in a duel with a friend seems the choice of a man who has lost his way a long time ago.

Billy is sweet natured and decent, an innocent, but his character is unseasoned. We don’t dislike him, but he’s painfully immature and inexperienced in the world. He knows only his heart, which beats for no one but Maria. It’s a black and white world where decency can easily be turned to mindless murder.

Women. Maria is the only character in the novel who aspires to possession of character traits that might be considered admirable. In the opening chapters, she is no more than a spoiled child used to getting her way. Grown into a young woman, she’s physically strong enough to dominate her father and can kick him around when she’s furious enough.

She is described as thoroughly “republican” in her sentiments, believing herself the equal of all others, and superior to anyone who thinks otherwise. Unaware that kind-heartedness and love of justice are qualities of character, she has only one standard of excellence—personal independence. This she regards as a manly virtue, and she expects to be admired for it.

Encountering Hulse begins to change all that. He makes her begin to see herself from what she imagines are his critical eyes. When attempting to intimidate him has no effect, she is shamed by a sudden knowledge of her shortcomings.


Romance. Love in this novel is blind. And it betrays Maria as deeply as it does Billy. She would happily surrender to Hulse as Billy would gladly surrender to every wish of hers. But both are doomed to the despair of unrequited love. Both must suffer its pain and confusion. Of the two, Maria has the strength to put her life back together and recover, though the novel is over before we see any evidence of that.

Clark rides roughshod over any romantic expectations of his audience. The novel shows that the human heart is destined for disappointment and misery. Lovers do not find each other and overcome the obstacles that novelists put in their way. The obstacles for Clark’s lovers lie deeply embedded in their own inadequacies. They can’t be removed by a simple twist of the plot.

Wrapping up. Is it a western? Well, it takes place in the West and certain western notions find expression in it. However, while the mining camp and the Sierras as a backdrop heighten and highlight the drama, it is a story that could take place with minor changes almost anywhere.

Little seems to be known about Frederick Thickstun Clark (b. 1858), who was born in Pennsylvania. The 1899 edition of Who’s Who found him teaching high school in Denver. He is the author of three other novels: A Mexican Girl (1888), On Cloud Mountain (1894), and The Mistress of the Ranch (1897).

In the Valley of Havilah is currently available at Internet Archive and for the nook. For more of Friday's Forgotten Books, click on over to Patti Abbott's blog.