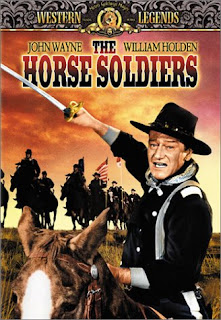 John Ford gave western fans a version of the Civil War in this film starring John Wayne and William Holden. At two hours, it’s an entertaining film without being over-ambitious. And without exactly doing justice to the subject, it manages to tell its story in a way that does not discredit either the Union or the Confederacy.

You realize watching it that there have been few movies about the Civil War since Gone with the Wind (1939). While the U.S. Army fighting Indians was for a long time standard fare on the screen, seeing those same soldiers shooting at other white Americans is something else again.

Ford chose wisely when he picked the novel The Horse Soldiers by Harold Sinclair (1907-1966). The book was based on Grierson’s Raid in 1863, during which 17,000 Union troops traveled from Tennessee across Mississippi to Union-held Baton Rouge doing damage to Confederate infrastructure.

Plot. There are three engagements in the film, one as a trainful of armed men attempts to defend the town of Newton’s Station. A charge down the main street into withering gunfire leaves many casualties. A makeshift hospital is organized to tend to the wounded, with the help of a local doctor. Meanwhile, the Union soldiers’ destruction of the town’s rail line is sobering in its thoroughness.

Following that, the boys of a military academy attempt a courageous though foolhardy attack on the Union troops. It’s a relief when the soldiers react in disbelief and then make a quick retreat before any lives are lost. Finally, at the end of the film, an outnumbered contingent of Confederate soldiers attempts gamely to prevent the Union troops from crossing a bridge.

Most of the conflict in the film, however, is between the colonel (John Wayne) and an Army surgeon (William Holden). They are at cross-purposes from the first scene in which they meet. Wayne was a civil engineer for the railroad before the war; Holden was a graduate of West Point. Just about everything separates them, from class to temperament.

Amplifying the conflict is Constance Towers as a Southern belle, who happens to overhear Wayne’s plans to strike across enemy territory to Baton Rouge. To keep her from telling anyone what she knows, Wayne is forced to take her and her maid along. Her presence is a constant source of irritation to him.

Before all is said and done, she begins to have a change of heart about him. She seems sorry to see him go as she and Holden stay behind with the wounded, to be overtaken by the Confederate troops who are on their trail. Glad to be finally rid of her, Wayne makes a courteous but not unhurried exit. There’s no kissing.

History. As a portrayal of the Civil War, the film is a far cry from what Matthew Brady’s battlefield photography captured. Neither are we reminded of the burning issues that drove Americans to war in the first place. The African-Americans who appear briefly in the film and Towers’ black maid Lukey (played by tennis player Althea Gibson) are Hollywood stereotypes whose history of slavery is mostly ignored. Gen. Grant gets a mention, but we don’t hear of Abraham Lincoln.

Meanwhile there’s an extensive list of movie trivia at imdb.com for this film. Viewers versed in historical accuracy have noted the many departures from correct military uniforms, firearms, flags, and protocol. Frequent reference to Andersonville is also incorrect, as this prison was not opened until a year following Grierson’s Raid.

Wrapping up. Shot in color and widescreen, with locations in Louisiana and Mississippi, this is an enjoyable film, with an entertaining balance between the serious and the comic. Wayne and Holden are a good match of opposites, and Towers holds her own well as a third party between them.

It’s refreshing that she remains an independent character from beginning to end. She may be a little wiser for the experience of having been a hostage, but she’s not driven by the script into any romantic alliances, real or feigned. Neither are the men required to compete for her affection.

The Ford touches are numerous, but they do not dominate the film. The only scene that rings false is an angry drunken monologue by Wayne. He could do grumpy and insulting as well as TV’s House, but sustained anger was not his long suit. I suspect it was not in his character.

The large supporting cast includes Hank Worden, Denver Pyle, Hoot Gibson, and Ken Curtis, who appeared in 304 episodes of Gunsmoke as Festus. The Horse Soldiers is currently available at netflix and amazon. For more of Tuesday’s Overlooked Movies, click over to Todd Mason’s blog.