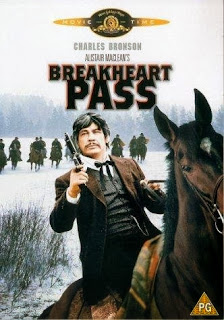 This western originated in a 1974 novel by Scots adventure and suspense writer Alistair MacLean (The Guns of Navarone). Set in 1870s Nevada, it takes place entirely on a train as it climbs the snow-covered slopes of the Rocky Mountains. The film might well have been called “Hell on Wheels,” as many on board do not make it to their destination alive. Charles Bronson, at the height of his career in tough-guy roles, has top billing, among a supporting cast of notables.

Plot. A medical relief train is on its way to a fort high in the mountains that has been reportedly stricken by an outbreak of diphtheria. Aboard the train are the governor of the territory (Richard Crenna), his girlfriend (Jill Ireland), a military officer (Ed Lauter), and a U.S. marshal (Ben Johnson), who is transporting a prisoner (Bronson). Two cars of the train are filled with cavalry.

We learn early on that a gang of thugs has overtaken command of the fort and is awaiting arrival of the train. The train itself is plagued with mysterious deaths and disappearances. The fireman falls from a high trestle and, climbing down to have a look at the body, Bronson determines that the fall was no accident. Then the cars carrying the troops derail and plunge over a cliff. 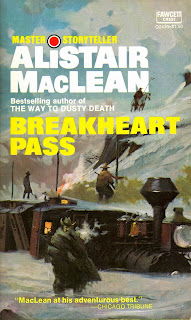 Whatever nefarious scheme is afoot becomes clearer as Bronson discovers that the medical supplies are in fact rifles and dynamite. And we gather that they are intended for a band of Indians waiting ahead at the Breakheart Pass of the film’s title. Several of the passengers and crew are acting strangely. Even the train’s cook seems to be in on the conspiracy.

The identities of the villains aboard the train and of Bronson himself are eventually revealed in the final scenes. Indians, the gang of thugs, and finally mounted cavalry converge on the stalled train, as bullets fly and dynamite explodes. In the final shot, Bronson stands with the locomotive, the snow-covered ground around him littered with bodies.

Mystery train. The film has the feel of an Agatha Christie mystery. The set up is much like one of her stories of murder in a country house, where all the suspects are under the same roof. There’s also her Murder on the Orient Express (1934), adapted to film in 1974. A difference is that Bronson’s character is part of the mystery. For a long time we don’t know who he is, and right to the end of the film we don’t know for sure what he’s up to.

The train travels uphill for the entire length of the movie, and it gets to be an uphill pull for the viewer as well. As the plot grows ponderous with uncertainty and unanswered questions, the locomotive and the string of cars behind it become a steadily heavier presence on the screen.

One spectacular moment that lifts you out of your seat is the derailment as cars with troops aboard plunge down a mountainside, shattering into splinters in slow motion. Another is a perilous fight scene involving Bronson atop the moving train. For the rest of the time, gravity seems to work against the forward motion of the story. The best parts are squeezed into the exhilarating trailer:

In the last scenes as the mystery has been solved and the train is under attack, it’s not clear what’s at stake anymore or who we should care about. I was worried about Jill Ireland, who seems at considerable risk trapped in her compartment as dynamite explodes in unexpected places. But the movie follows Bronson instead as he races around on an implausibly stolen Indian pony.

Wrapping up. Alistair MacLean (1922-1987), a bestselling author from the late 1950s to the time of his death, saw 18 of his novels translated to the screen. He wrote four of the screenplays himself, and Breakheart Pass is one of them. If parts of the film seem muddled, it may be that bestselling authors don’t always make the best screenwriters.

The score and widescreen cinematography contribute well to the movie’s grand scale. Bronson is fine as the stone-faced central character, dressed in black, with his trademark mustache. Other performances are credible as well, including Ben Johnson, Jill Ireland (Bronson’s wife), Charles Durning, and Ed Lauter. Veteran character actor David Huddleston has a short-lived role as a doctor on board. Boxing champion Archie Moore is the train’s cook.

Best supporting honors, though, go to the locomotive. The film was shot along the Camas Prairie Railroad at Lewiston, Idaho.

Breakheart Pass is currently available at netflix, amazon, and Barnes&Noble. The novel can be found at amazon, Barnes&Noble, Powell’s Books and AbeBooks. For more of Tuesday’s Overlooked Films and TV, click on over to Todd Mason’s blog, Sweet Freedom.
Tweet

Further viewing:
Trailer for Murder on the Orient Express