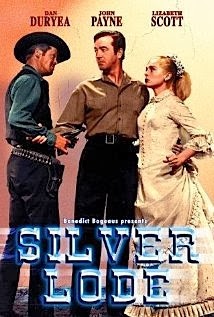 McCarthyism hit full tide in 1954 with the Army-McCarthy hearings, and this western by veteran Hollywood director Allan Dwan tells a story that parallels those years of suspicion and public witch-hunts. The villain of the movie is even named McCarty.

Plot. In a frontier town in Nevada, Dan Ballard (John Payne) is about to marry his sweetheart Rose (Lizabeth Scott). In the short two years he’s lived there, he’s become a well-respected local rancher. The wedding is interrupted by the arrival of four men, led by Ned McCarty (Dan Duryea), with a warrant for his arrest. Seems he’s wanted for robbery and murder in California.

The town’s citizens stand by Payne, including the bride-to-be and an old flame, Dolly (Dolores Moran), who hangs out in the saloon. At first outspokenly supportive, the tide of opinion begins to turn against Payne, especially as the sheriff is shot by Duryea and Payne is discovered standing next to the body holding two pistols.

Payne flees, firing the pistols as he goes and casualties accumulate. Taking sanctuary in a church, he is followed by Duryea who traps him in the church’s bell tower. When it looks like it’s all over for Payne, Scott comes running from the telegraph office with a wire exonerating him, and a ricocheting bullet fired from Duryea’s gun puts an end to Duryea instead. The trailer shows the plot of the film in a nutshell:

Parallels. Duryea’s constant hectoring seems pretty obviously modeled on the rhetorical style of Joseph McCarthy himself. In its story of a man fighting outlaws single-handed on his wedding day, the plot of the film also has a lot in common with another movie, High Noon (1952). There’s even the hero’s attachment to two women, one his respectable young bride and the other a former lover. In this film, the two women actually conspire to keep the hero alive. 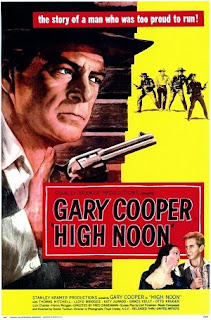 The story of each film is likewise compactly told, taking place in a matter of a few brief hours. While Fred Zinnemann pumped up the suspense in the last scenes of High Noon as Cooper is stalked by the four gunman, Dwan pumps up the action, as Payne is pursued through the streets of town.

An ambitious tracking shot follows him for blocks as he dodges among buildings, the streets as empty of life as they are in High Noon. The ending of each film is also similar. Payne, in disgust, turns his back on the town that turned its back on him, and he walks away with Scott at his side.

While Silver Lode is in Technicolor, it was shot and edited in a workman-like style that lacks the artistry of the earlier black-and-white film. Payne’s role as the wrongly accused man makes him a passive victim of Duryea’s malice. His dilemma is not personalized as it is for Gary Cooper. In High Noon the drama is played out on Cooper’s face as much as it is in the streets of the town.

The cast includes veteran actors, Harry Carey, Jr., Emile Meyer, John Hudson, Robert Warwick, Stuart Whitman, and Alan Hale, Jr. Canadian-born Allan Dwan, it should be noted, was a giant of Hollywood filmmaking, with over 400 film credits and a career spanning the years 1911-1961. A versatile director in nearly every film genre, he directed actors from Douglas Fairbanks (Robin Hood, 1922) and Shirley Temple (Heidi, 1937) to John Wayne (Sands of Iwo Jima, 1949).

Silver Lode is currently available at netflix and at amazon and Barnes&Noble. For more of Tuesday’s Overlooked Movies and TV, stop in at Todd Mason’s blog, Sweet Freedom.
Tweet