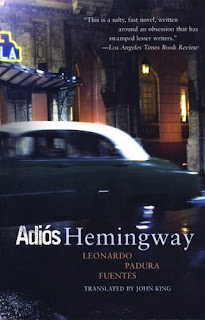 This crime fiction novella is a bit of a departure for BITS, but a recent article in NY Times Magazine about its Cuban author got me really curious. Padura Fuentes, a life-long resident of Cuba, has gained an international reputation while steering a middle course between officially approved publication and unofficial.

His police detective, Mario Conde, is a man hardened by his experience on the mean streets of Havana. He has been witness to the aftermath of revolución in Castro’s Cuba, faltering now with the end of Soviet support. Not proud of himself as a cop, he has sunk deeply into disillusionment. What keeps him going is drinking with old friends and a desire to be a writer. In fact, writing—and living in poverty—seems the only honorable use of his energy and intelligence.

Plot. The former Lt. Conde is lured from retirement when the remains of a shooting victim turn up on the grounds of Ernest Hemingway’s residence, Finca Vigía. The place is preserved now as a museum honoring the man who once kept a home in Cuba. Hemingway may even have been living there when the killing took place. The plot thickens as an FBI agent’s badge is found in the grave.

Solving a 40-year-old crime is more than a challenge. Conde begins with a boyhood memory of having seen Hemingway shortly before he left Cuba to return to the U.S. To reconstruct the famous writer's last days in Havana, Conde tracks down the few still living who knew him. His sleuthing also takes him to a library and involves snooping through the author’s old papers.

In a parallel storyline, Padura Fuentes cuts from Conde to Papa Hemingway himself on a night in 1958. He is prowling the grounds around his home with a dog and a Tommy gun. It is a place redolent with memories for the aging writer, including a nude swim in the pool with Ava Gardner.

The unraveling of the mystery comes as the two storylines finally converge. Eventually Conde’s hunch-work and skill at interrogation reveals some well-hidden secrets, though they leave him just short of being able to reconstruct the scene of the murder. For that, Padura Fuentes turns back to the fatal night in 1958, and we see how all the floating pieces of the puzzle fit perfectly into a single image. Nicely done.


Character. Layered deftly into all of this is Conde’s own love-hate relationship with Hemingway. As a writer he admires the man’s work. But he sees him also as the creator of a sham public persona—given to macho posturing to compensate for an uncertain masculinity. It’s a warts and all portrayal of the Nobel-winning writer, and his suicide is a dark motif running through the novel.

Conde himself is a wonderful creation. His hard-boiled persona is softened by his love of books and his life-long loyalty to a few friends. Though police work has given him an identity and a place in the social order, he hates the profession.

“I’ve seen too many people turning into bastards,” he says, “when their job should be making life fucking difficult for real bastards.” And he feels forever tainted by his police work.

Can it be true that you never stop being a cop, he asked himself, although he knew the answer: you never have the privilege of being an ex-anything, whether it’s a cop, a sonofabitch, a queer or a murderer.

How Conde eventually makes peace with his mixed feelings about Hemingway is really a third storyline in the novel. And his ruminations offer a special pleasure for other writers who feel torn between the demands of the material world and their love of the written word. For all Hemingway’s faults, Conde laments at last how the man was deprived in his final years of “everything he had most loved, even alcohol and literature.”

And you don’t mess with that, concluded Conde, who, because of his own weaknesses and beliefs, couldn’t help feeling solidarity with writers, crazy people, and drunkards.

Adiós Hemingway is currently available at amazon, Barnes&Noble, and AbeBooks. For more of Friday’s Forgotten Books, click on over to Patti Abbot’s blog.
Tweet