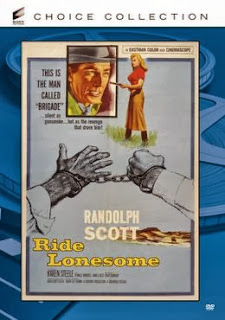 This Budd Boetticher western filmed from a Burt Kennedy script is a classic. Shot in Cinemascope entirely in the Alabama Hills of Lone Pine, California, it’s a low-budget movie that looks as high-gloss and polished as any 1950s western.

Plot. Like their other films, e.g. Seven Men From Now (1956), the storyline is spare. Four men and a woman cross an arid landscape to get from point A to point B. One of the men (Randolph Scott) is a bounty hunter, another is his prisoner (James Best), and two others (Pernell Roberts, James Coburn) are partners with an outlaw past. The woman (Karen Steele) is the widow of a stagecoach relay station agent.

They are followed first by Indians, who have killed the woman’s husband and seem bent on making more trouble. Then they are being followed by the prisoner’s brother (Lee Van Cleef) and his gang, determined to rescue the young man before he is turned over to be hanged. That’s it.

Characters. The marvel about a script like this is how much tension and suspense these two filmmakers could create with so few elements. The film illustrates perfectly the dynamics of a story driven more by character than plot.

At first the differences between the characters seem only to do with temperament and personality. Then as the story unfolds, we learn that each of them has some key incident in the past that accounts for what they are doing at this moment in their lives and what they want.

This rounds them out as characters and also puts them at uneasy cross-purposes. The more we learn about them, the harder it gets to predict what they will do, as when the prisoner surprises Randolph with a rifle he’s taken from Roberts. While he holds Randolph at gunpoint, Roberts draws his sidearm and persuades him there’s no shell in the firing chamber. For a long moment, we don’t know whether it’s a bluff, whether the prisoner will believe him, or even Roberts’ real intentions.

The economy of the scene is so uncomplicated and simple, but it’s turns like this in the plot that build tension and uncertainty. And the source of the uncertainty is in the characters themselves, Scott being a prime example.


John Sayles has said that Scott’s character in his westerns goes back to William S. Hart, an often stern man of few words and courtly with women. Never cracking a smile, Scott seems to be all business and single-minded. He has a prisoner to bring in and he doesn’t budge from that mission, until we begin to sense there’s something more at stake. And there is.

Scenes are often played out in long takes, the camera tracking the actors and then observing them in extended two-shots as they talk. Or several may be arranged before the camera in medium and long shots, using the depth of the widescreen to place them at various distances. These scenes are so well done, it takes a second viewing to notice the spare use of editing.

Wrapping up. For viewers who remember Pernell Roberts from Bonanza, his performance here is a real surprise. He was an excellent screen actor and brings intelligence and complexity to the character of a man with an outlaw past who wants to go straight. This was James Coburn’s first movie, as he plays a scrawny kid getting his lessons in life from Roberts.

Blonde Karen Steele is costumed 1950s-style in a way that complements her proportions, and she looks just fine. She also underplays nicely, letting a look or movement often do the work of several lines of dialogue. Her presence generates a good deal of interest from Roberts, and while he behaves like a gentleman around her, you can almost feel the steam coming up from under his collar.

The setting also deserves mention as a character. Boetticher’s photography emphasizes the vast reaches of the rocky, arid landscape. Beyond is the starkly beautiful ridgeline of the Sierras. The characters are sometimes shot at such a long distance, they seem lost in infinite space.

Ride Lonesome is currently available at netflix, amazon, and Barnes&Noble. For more of Tuesday’s Overlooked Movies and TV, drift on over to Todd Mason’s blog, Sweet Freedom.
Tweet

Coming up: Mark Twain, The Adventures of Huckleberry Finn (1884)