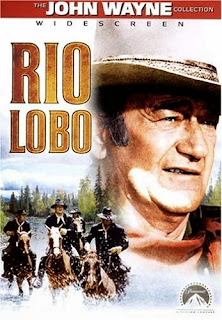 Even star power and a first-class director can’t always overcome a confusing script, and this western is a good example. John Wayne has top billing in this Howard Hawks film about a former Union Army colonel who revenges a wartime traitor and rids a Texas town of a corrupt sheriff. The twist is that he relies on the help of two Confederate officers he met during the War.

Plot. The movie tries to tell two—maybe three—different stories with mostly the same characters. It starts out as a war movie with a long, half-hour sequence involving a complicated train robbery and a chase after the thieves in which Wayne is captured by rebels. This turns out to be a set up for his meeting the two Confederates (Jorge Rivero, Christopher Mitchum).

Suddenly the War is over and we’re in Texas. There a girl (Jennifer O’Neill) has ridden 200 miles from a town called Rio Lobo to report the killing of a medicine show peddler she has befriended. Reenter Rivero, in time for a gunfight that erupts with some deputies who have followed O’Neill to arrest her. Soon Wayne, Rivero, and O’Neill set off for Rio Lobo to bring the peddler’s killers to justice. Already there’s romance brewing between Rivero and O’Neill.

The corrupt sheriff (Mike Henry) and his gang are in the pay of a villainous land grabber (Victor French). His MO is to have a rancher’s family member arrested for a hanging offense and then dropping charges in exchange for the deed to the ranch. Reenter Mitchum who gets beaten up and jailed for allegedly stealing horses.

Wayne and Rivero are joined by Mitchum’s father (Jack Elam) to capture French, who is surrounded by a small army of armed guards. In a daring nighttime raid they overcome the guards and Wayne nabs French, who turns out to be the traitor who tipped off the Confederates about the train we saw robbed in the first reel.

Taking over the town jail and freeing Mitchum, Wayne sends Rivero for the cavalry, but Rivero is taken captive by Henry’s men. This situation results in a prisoner exchange that ends unhappily for the sheriff and his gang. Henry himself is gunned down by a girl whose face he has disfigured during an interrogation.

Four stars. A synopsis of the film makes it sound fairly coherent, but watching its nearly 2 hours is another matter. It rambles on in way that seems like it’s not sure where it’s going. Screenwriter Leigh Brackett also has writing credits for two other Hawks-Wayne collaborations, Rio Bravo (1959) and El Dorado (1966). As the plot of this film threatens to resolve into a jailhouse siege, you are reminded of those two far superior westerns, which are much more tightly focused and constructed.


Besides a strong plotline, the film seems unsure about its attitude. Usually in a John Wayne western, the humor overlays a more serious undertone, where violent death lurks in the shadows. Suspense builds in the threat of potentially deadly danger. That doesn’t happen in this film, where there is not much of depth under the surface playfulness, though deaths abound.

An example would be the easy camaraderie that marks the friendship between Wayne, Rivero, and Mitchum. At the tail end of the Civil War, men who had witnessed and survived the killing fields of that bloody conflict would show more distrust in each other’s company. And there would be more of resentment and bitterness to overcome in the war’s aftermath. There’s no attempt at that kind of psychological or emotional realism here.

The three women characters are given emotions to display, and those displays seem rarely connected to feelings originating within them. Wayne plays himself and there’s not a false note, though he’s looking old and tired sometimes and a bit portly. Mexican actor Rivero has lean, soap-opera good looks but seems often to be working to remember his lines. Here he is in several scenes with other cast members:

The real saving grace of the film is Jack Elam who gives a spirited and entertaining performance in a role that might otherwise have gone to Walter Brennan. Also believable is David Huddleston as the town dentist. It’s a comic role that rings true because he plays it perfectly straight.

Wrapping up. The film was shot in color in Old Tucson and Cuernavaca, Mexico. George Plimpton plays a cameo role as one of the Rio Lobo deputies, who meets a quick end after one line early in the film. During shooting, Wayne won an Oscar for his role in True Grit (1969).

Rio Lobo is currently available at netflix, amazon, and Barnes&Noble. A Spanish-dubbed version can be found at youtube. For more of Tuesday’s Overlooked Movies and TV, jump on over to Todd Mason’s blog, Sweet Freedom.
Tweet

Further viewing:
The making of a scene with George Plimpton