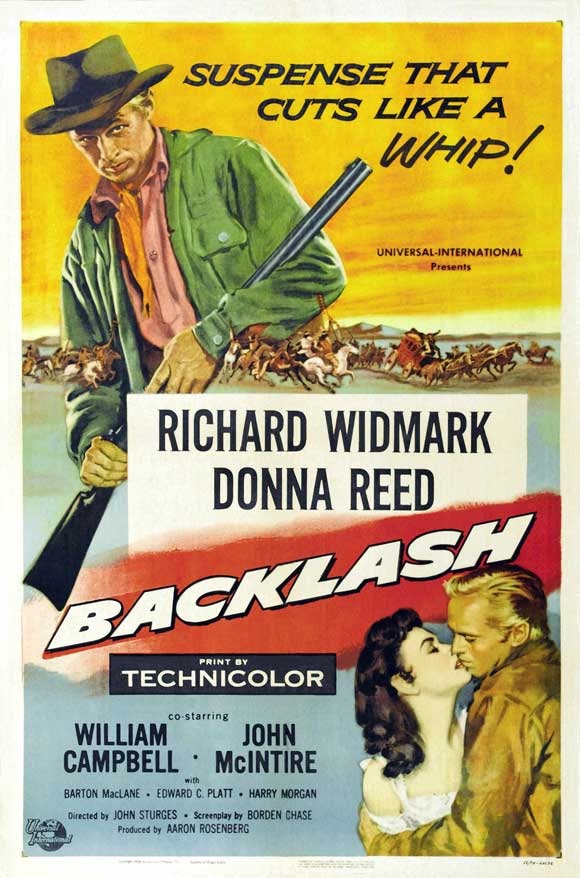 This is one of those 1950s westerns where a Richard Widmark can haul off and slap down a Donna Reed in the last reel with impunity. It’s also one of those moments like others in the film that seem like western-movie clip art pasted into the story to make up for lack of actual substance you can believe in.

This is a little surprising in a film from the hands of John Sturges, who made Gunfight at the OK Corral (1957), The Magnificent Seven (1960), and many others. Not to mention screenwriter Borden Chase, with a notable list of western scripts that became vehicles for James Stewart.

Plot. Widmark plays a man determined to find and kill the killer of his father, so the plot is a revenge story. It’s also a mystery, because he never knew his father, and he doesn’t know who killed him. There is only a mysterious “sixth man” who disappeared after the robbery of $60,000 in gold that left several men dead.

At the start of the film, Reed encounters Widmark at the scene of the crime. A hardened woman and widow of one of the dead men, she’s after the gold. Sharing a similar objective, she and Widmark develop an uneasy alliance.

The rest of the film is filler as a trip to a trading post to question the Army sergeant who buried the robbed dead men develops into a siege by Apaches. Escaping that, Widmark tangles with a pair of men (Harry Morgan, Robert J. Wilke) whose brother also died in the robbery. They are after the missing gold, too. A saloon shooting puts Wilke out of the picture, and Widmark takes a slug in the shoulder, but Morgan survives to make trouble later.

Some kind of steamy attraction builds between Widmark and Reed as he forces a so-long kiss on her, and she gives him a slap. Later, she finds him in the desert and cuts the slug from his shoulder with a Bowie knife, the only realistic part of it his agonized cries as she does the deed. They snuggle with more kissing in the campfire light as he swoons under the influence of a  “Southern painkiller” she has slipped to him. It apparently also is effective as an antibiotic, as he claims to be mostly recovered the following morning.


Distance is then magically transmuted as the two ride in short order from Arizona to Texas to locate a rancher whose brand was on the horse of the mysterious sixth man. There, not only does Widmark rile the feathers of a young trigger-happy gunslinger (William Campbell). The visitors have arrived in the middle of a range war. Before all is wrapped up, more killings are required, including Morgan, Campbell, and one of the two feuding ranchers (John McIntire). Widmark is the last man standing, as he walks away with Reed at his side.

Wrapping up. That’s a lot of plot for 84 minutes of film, and there’s rarely a dull moment. For an action-adventure, it does not disappoint, unless you’d like it to all add up. Instead, it seems a little too much like a grab bag of western plot conventions strung together until the final scenes, which produce a couple of unexpected surprises.

The Technicolor Arizona photography is quite handsome, and the costuming was given some thought, as characters appear in a range of rich earth tones. Only Donna Reed’s 1950s dude ranch chic outfit in the opening scene rings false.

Backlash is currently available online at youtube and on DVD at amazon. For more Overlooked movies and TV, click over to Todd Mason’s blog, Sweet Freedom.
Tweet