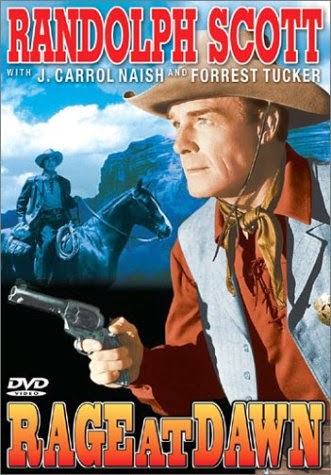 A Randolph Scott western rarely gets a lukewarm review here at BITS, but this will be one of those times. Rage at Dawn is a fictionalized account of the Pinkertons’ efforts to bring to justice the Reno Brothers’ gang in southern Indiana shortly after the Civil War.

Precursors of the James and Younger gangs, they had a large outlaw following and gained notoriety as the nation’s first train robbers, operating over a large area of the Midwest. Some were put to a stop by vigilante citizens, who hanged them before they could face trial.

Plot. The film focuses on four of the Renos, including the leader Frank (Forrest Tucker), Simeon (J. Carrol Naish), and Clint (Denver Pyle). Another sibling, Laura (Mala Powers), is their put-upon sister, who shelters them at her farm. Pyle plays the only Reno brother who is a law-abiding member of the community, where the Renos dominate local politics by intimidating voters to put their own men in office, notably the judge (Edgar Buchanan), the chief prosecutor, and the sheriff.

We don’t meet Randolph Scott until well into the film as a Pinkerton man assigned by the agency to infiltrate the gang and set them up for arrest. The scheme is improbable at best, and it involves his befriending the Renos’ sister Laura, who falls for the handsome, amiable Scott in a big way. The brothers are finally tricked into a train holdup that ends in a lengthy shootout. The citizens of their hometown take the law into their own hands, breaking into the jail where the brothers are being held. Scott arrives too late to save them from hanging.

Downside. The film doesn't live up to the energy and excitement promised by its title. I fault the direction, which is flat and amateurish. An early scene in the Renos’ kitchen is shot like a scene from a high school play. The performance of Mala Powers throughout the film is shrill, and the actors portraying the brothers resort to cliché and stereotype, as if none had been given a clue about how to make their characters more believable or even remotely sympathetic.

After a too-long delayed entrance into the film, Scott does much to redeem it. He turns in his usual competently professional performance, his character sure of himself, congenial, wryly amused at times, firm and commanding when he needs to be. The best scene by far is his slyly clever manipulation of an unsuspecting Edgar Buchanan (another real professional before the camera).

The two find enjoyably entertaining moments in the script, as Scott physically dominates the single room where the scene takes place and Buchanan, as a judge, weighs the options of making a deal with him in exchange for a lucrative payback. Camera and editing make use of close-ups in the scene that actually illuminate both characters. For the length of it, you feel like you’re in a different (and much better) movie.

But the rest of the film is routine fare; the script is adequate, though not above average. Buchanan gets the best line of the film, almost lost in the hubbub as angry citizens take him into custody: “This is imponderable,” a word he has picked up earlier from Scott.

The Technicolor cinematography gives warmth to much of the footage, but editing seems often perfunctory for an action film. Continuity can appear haphazard. [As a reader points out below, director Tim Whelan died the following year, and aging or poor health may well have been a factor in the filming and production.]

Wrapping up. The 87-minute film was shot at Columbia State Historic Park in California. Forrest Tucker went on, of course, to star in the popular TV sitcom F Troop (1965-67). Much-loved character actor Edgar Buchanan also found tenure in a TV series, appearing in 222 episodes of Petticoat Junction (1963-1970). He had already appeared in 40 episodes of Hopalong Cassidy (1952-1954). Writer Horace McCoy is remembered as the author of the Depression Era novel, They Shoot Horses, Don’t They? (1935), adapted to film in 1969. His western, Texas (1941), was reviewed here a while ago.

The Reno brothers appear as characters in the Elvis Presley film, Love Me Tender (1956). There is also a recent documentary available on DVD called The Legend of the Reno Brothers. Rage at Dawn is currently available online at youtube and amazon instant video, and on DVD at netflix, amazon, and Barnes&Noble. For more Overlooked movies and TV, click over to Todd Mason’s blog, Sweet Freedom.
Tweet