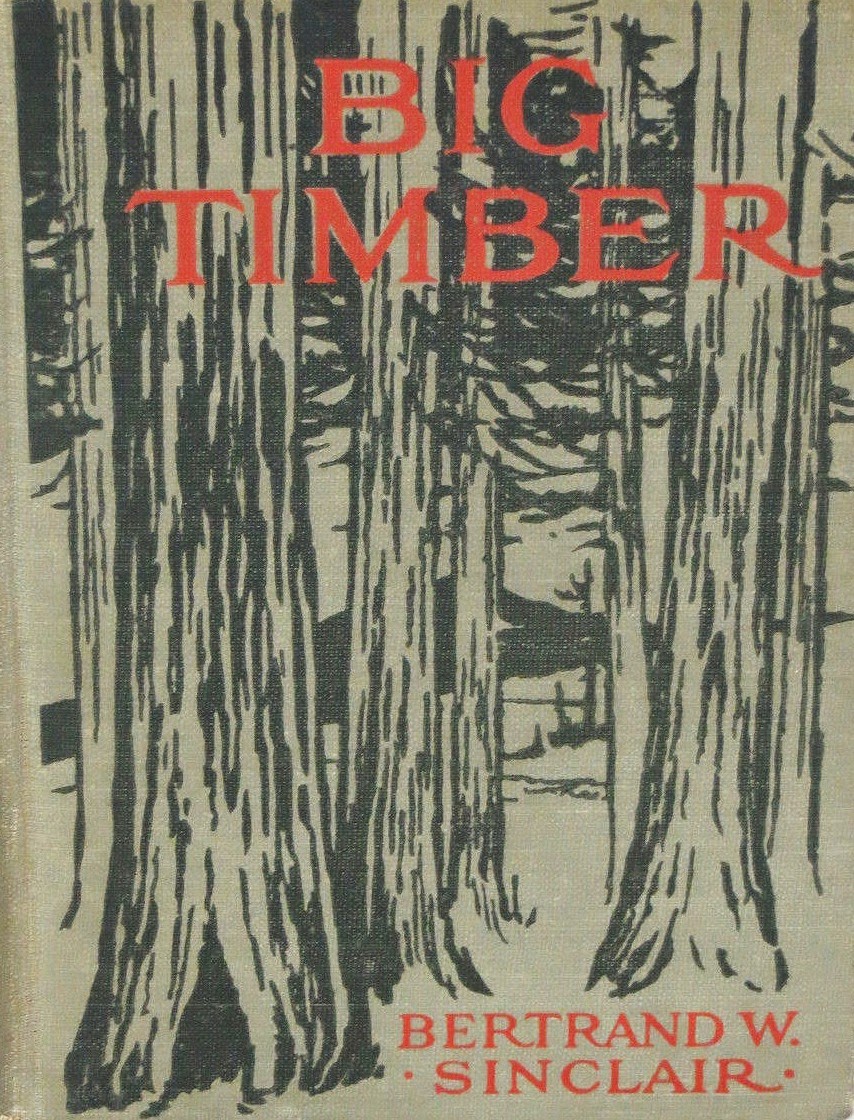 Looking for a theme song to go with this novel by Canadian writer Bertrand Sinclair, you might pick Bonnie Raitt’s “I Can’t Make You Love Me.” It’s a story set in the old growth woods of British Columbia, where a one-sided marriage of convenience leads to a good deal of heartbreak and disappointment.

Character. The central character is 22-year old Estella Benton, suddenly thrust on her own by the accidental death of a father who has left her penniless. Unprepared for the cold, unpredictable world, she is summed up by the narrator as “a young woman who had grown up quite complacently.” She has been “wholly shielded from the human maelstrom, fed, clothed, taught, an untried product of home and schools.”

As for the future, she has had no more than a vague notion of eventual marriage to a Prince Charming who would come along to sweep her off her feet—and maintain her in a life style to which she has been long accustomed.

Plan B finds her on a long train journey to remote British Columbia, on the banks of a lake north of Vancouver, where she joins her brother, Charlie, who has a start-up logging company. Obsessed with becoming wealthy, he has little regard for his sister’s personal welfare and puts her to work as camp cook, a grueling job that exhausts her and brings her to near despair.

Romance. A rescuer and prince by almost any standard shows up in the manly form of Jack Fyfe, who has a well-run logging operation of his own. He partners with Charlie to deliver on a timber contract and befriends Estella, who discourages what she interprets as his unwelcome attention.

Any reader can see that he is filled with a gentle compassion for her and has fallen quite in love. But she will have none of this rough, handsome man of the woods. Nevermind that he has a fine intelligence and tender sensibilities. He frightens her, and for no apparent reason than her unwillingness to consider meeting him on equal terms, as a caring, considerate friend and potential life mate. For love to be true, she has to feel it as a delirious infatuation, and it’s not there.


Eventually, he offers marriage to free her from her bonds of servitude to her ungrateful brother. “Give it a chance,” he says to her kindly, and while she finally warms to the idea, she doesn’t warm to him. The marriage is not a bad one, and she is a dutiful wife. But while Fyfe waits patiently for her heart to turn to him, her only marital comfort is the birth of a son.

Matters take a sudden turn when Estella is rescued from drowning by a business rival of her husband, a smooth character named Monahan, who begins to woo her. She falls for him hook, line, and sinker, caught up for the first time in her life by a surge of romantic feelings. After Fyfe puts a stop to Monahan by giving him a good choking, Estella determines to remain faithful to her marriage vows. But she is soon grief-stricken by the death of her son.

Marriage. Big Timber picks up a theme to be found in other novels by Canadian writers of early frontier fiction. Two that come to mind are Herman Whitaker’s The Settler (1907) and Arthur Stringer’s The Prairie Wife (1915). In all three, marriage teeters on the verge of estrangement for a while until circumstances allow marital love to take root and flourish.

Fyfe’s young wife rediscovers a talent for singing and leaves him with his blessing to pursue a career in Vancouver, where she gains sudden and unexpected fame—which promises to take her to Europe. But her plans go on hold when Fyfe’s logging operations are devastated by forest fires. The most ruinous are acts of arson set as revenge by the villainous Monahan.

Finding Fyfe alive after a desperate search, she recognizes the emotions welling up in her as the love she has never allowed herself to feel for him. We don’t know that they live happily ever after, but it’s a start. They have already weathered much that most romantic lovers haven’t a clue of at the end of a typical novel from the period.

Storytelling style. Sinclair’s portrayal of Estella takes some risks. She is far from likable as a pampered young woman of no particular depth of character. Her expectations of life are shallow, and she has few personal resources to deal with adversity. And while her brother’s careless use of her earns her some sympathy, her own refusal to see the qualities of character in Fyfe makes her seem willfully obtuse.

While a reader may well grant her the right to marry no one she does not love, you yearn for her to at least consider his offer of emotional support and friendship. Meanwhile, falling head over heels for the cad Monahan, she shows a fatal lack of judgment. To stick with the story, you really have to trust that she will acquire a degree of maturity before the novel ends. And Sinclair grants her that as she grows into independence, self-reliance, and self-confidence once she leaves Fyfe to live on her own.

Big Timber reflects Sinclair’s firsthand knowledge of logging operations, and his descriptions of techniques for logging old growth timber are well detailed. They are a companion to Martin Allerdale Grainger’s Woodsmen of the West (1908), down to the detail of new hires arriving on the logging work site dead drunk. He also captures well the passing seasons, especially the rains and fogs of winter. The most notable creation in the novel is that of the character Fyfe, who is an estimable example of patience and fortitude in a man. You enjoy his scenes for the way his mind and heart work and the measured way he expresses himself.

Wrapping up. Bertrand W. Sinclair (1878 – 1972) was born in Scotland and came to North America in 1889. Working as a cowhand in Montana, he befriended and later married novelist B. M. Bower (Chip of the Flying U, 1906), who had encouraged him in his writing. When his marriage to Bower broke up in 1912, he relocated to Canada and eventually settled in British Columbia.

FictionMags Index lists over 175 of Sinclair’s short stories and serials published in the magazines during 1906 – 1940. Many saw print in Street & Smith’s The Popular Magazine. Others appeared in Short Stories and Adventure. He wrote and published a dozen or more novels, some of them cowboy westerns, such as Wild West (1926), set in the American West.

Like Andy Adams (The Log of a Cowboy, 1903), he strove to base these stories on the actual lives of working cowboys. His later novel, Poor Man’s Rock (1920) was based on his knowledge of the fishing industry. Big Timber was made into a film in 1917, now believed lost, starring matinee idol Wallace Reid.

Big Timber is currently available online at google books and Internet Archive, and in print and ebook formats at amazon and Barnes&Noble. For more of Friday’s Forgotten Books, click on over to Patti Abbott’s blog.
Tweet