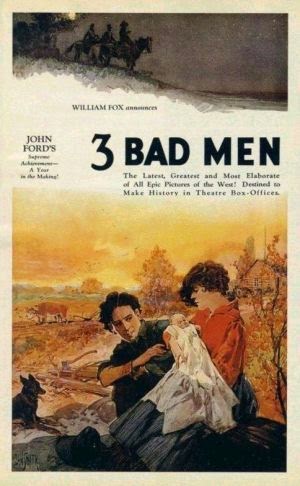 If you can tolerate the pop-up ads every 15 minutes at YouTube, there’s a fine copy of John Ford’s silent western 3 Bad Men currently available for viewing there. Otherwise, it’s been paired with another Ford film from his years at Fox studios, Hangman’s House (1928), and both are on DVD.

As you would expect from Ford, it is a big, sprawling western, set against the picturesque Tetons of Jackson Hole, Wyoming, with several scenes shot in the Mojave. Ford imagines a land rush in Dakota Territory as thousands of settlers bring covered wagons to the town of Custer to await the opening of Sioux lands to homesteaders and gold prospectors. The year is 1876 (or 1877 depending on how you read the intertitles).

So far as I know, such a land rush did not occur there (as it did in Oklahoma), but Ford films one anyway, with much excitement, a variety of stunts, and editing as kinetic as the Odessa Steps sequence in Eisenstein’s Potemkin.

Plot. 3 Bad Men, “suggested by” a novel by Canadian writer, Herman Whitaker, is about three horse thieves (Tom Santschi, J. Farrell MacDonald, Frank Campeau) who give up their life as outlaws to help out a young woman (Olive Borden) whose father has just been killed on their way West. The story resembles Peter B. Kyne’s novel, The Three Godfathers (1913), which Ford would make into a film with John Wayne in 1948.

A harmonica-playing cowboy (George O’Brien) is invited to join the entourage after the three former thieves decide Borden needs a husband to look after her, none of them being of sufficient caliber for the job.

In Custer, matters are complicated by a corrupt sheriff (Lou Tellegen), who has falsely promised marriage to a girl (Priscilla Bonner), while forcing her into the company of a band of loose women who appear to be prostitutes. She eventually is revealed as Santschi’s sister, and he discovers her too late to save her from a melodramatic fate.

Meanwhile, Tellegen is after a prospector’s map that will show him to a rich gold field in the mountains. The women and children in town take shelter in a church as he and his men wreak havoc, setting fire to it with torches and burning wagons.

On the day of the land rush, O’Brien, Borden and the three thieves race ahead of the throng with Tellegen and his gang following close behind. Attempting to hold them back in a narrow pass, each of the thieves gives up his life so that O’Brien and Borden can make it to safety. There’s plenty of suspense, as well as a spectacular explosion when one of the thieves holes up in a cabin with barrels of gunpowder.

What to look for. George O’Brien had a lengthy career as a film actor, with roles in numerous westerns, from the 1920s to 1940s. Before 3 Bad Men, he had played the lead role in John Ford’s The Iron Horse (1924). He is a likable physical presence on screen. His face expressive in close-ups, he has a warm, easy grin that serves well in scenes with Borden.

Ford is adept at crowd scenes, and there are many in the film. He manages well a large cast of characters, each with their subplots in the overall narrative. The visual effects can be spectacular, as when he pans across a distant line of riders and wagons waiting for the signal to begin the land rush. It looks miles long.

The rush itself includes wagons overturning, shots from ground level of horse-drawn vehicles passing overhead and tearing up sod. You can hear the 1926 audience gasp as an infant is left behind, forgotten by an anxious parent, and just as it is about to be trampled, it is snatched up by a rider racing past.

The overall mood of the film is comic, though Ford knows when and how to milk scenes for sentiment. The final partings between the thieves must have left hardly a dry eye in the house.

An excellent copy of 3 Bad Men with a new music track is currently available online at YouTube. It can also be found on DVD at Netflix, amazon, and Barnes&Noble. For more of Tuesday’s Overlooked Films click on over to Todd Mason’s blog, Sweet Freedom.