Ed Gorman, Riders on the Storm 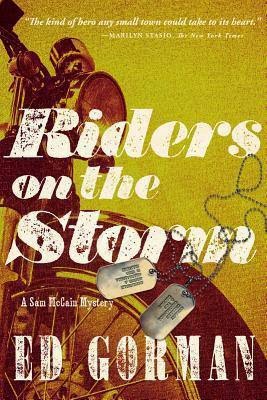 Ed Gorman’s new Sam McCain mystery is set in 1971 and reflects some of the civil turbulence of those Vietnam years as they wash over a small Iowa town.

Plot. A hawkish Senator is trying to ride a waning tide of patriotic enthusiasm to keep himself in office. But his handpicked candidate for a Congressional seat gets murdered after an altercation with a fellow veteran who has made public his opposition to the war.

That John Kerry-sympathizing vet is quickly suspected of the crime by the new sheriff, and the man’s best friend, McCain, has an uphill battle finding evidence of his innocence.

Time and tide. Gorman remembers the early 70s well (Janis Joplin is heard on the radio at one point singing “Me and Bobby McGee”). The novel is aptly named for the mournful Doors song, “Riders On the Storm,” which recalls the darkly violent and divided mood of a time marked by the growing national ambivalence about Vietnam. He is also a sharp observer of small-town politics and social distinctions.

The portrayal of women in the novel does much to fix its particular point in social history. Whether wives, lovers, or others, they are mostly untouched by the feminist creeds that came to dominate public discourse about gender roles in the years that followed. Gorman shows them as attractive and sexy, reliant on the men in their lives, homemakers and loving mothers of small children.

Two, however, emerge as professional women, one of them McCain’s own girl Friday, bracingly independent and unapologetically resourceful. Another seems able to blend marriage and career, though we don’t learn quite everything a candid review would reveal about her until well after she gets involved in McCain’s attempts to rescue his falsely accused friend.

While Gorman does not necessarily endorse it, there is much of the 1970s indulgence in extramarital sex, booze, and other pastimes that had a generation smugly confident in themselves because they were under 30. But you can feel the earth shifting under McCain’s feet as the 1960s recede into the hazy distance behind him.

Wrapping up. This is an enjoyable novel that has as much fun capturing the time and place of its setting as puzzling over the clues pointing to the solution of the mystery it poses. Whether westerns or crime fiction, you know you’re in good hands with Ed Gorman. I recommend this one.

Riders on the Storm is currently available in print and ebook formats at amazon and Barnes&Noble.
Tweet