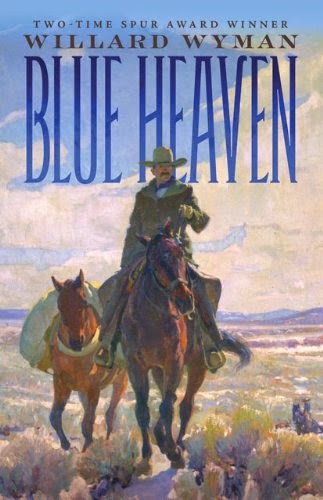 Can’t say how many times I have anticipated the opening of a review with the words, “This is really an unusual book.” For all the predictable conventions of storytelling, I am still often surprised by the unexpected turns a writer’s story takes. I don’t mean turns of plot, because we expect that in a novel. They are, in fact, a convention of the form. A novel would not be a novel without them.

What I mean is the presence or absence of conventions so out of the ordinary and unusual, you feel like your GPS has purposely taken you someplace you never intended to go, and could not find on your own if you tried. This happened to me with this novel.

Blue Heaven is a prequel, preceding in time Wyman’s earlier High Country (reviewed here a while ago). It introduces in its later chapters a character who is at the center of High Country, and is the link between them. Blue Heaven takes place during the 1910s to 1940s. High Country unfolds in the years that followed.

While Blue Heaven is set in the Swan range north of Missoula in Montana, High Country follows its characters southward to California’s High Sierras. Both novels are about wilderness packers and the mystique of being in the mountains, especially at high elevations, over passes, and along watersheds in hard to access back country.


Unlike much western fiction, Wyman’s novels are not about protagonists engaged in conflict with villainous characters. There are no villains at all. There are people in his stories, but together they make up a community of men and women, chiefly supportive of each other. Wyman somehow manages to hold your interest by creating a cast of uniformly “nice people.” 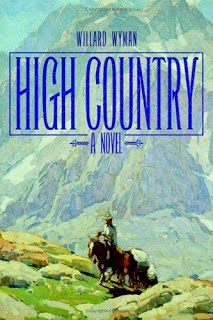 In almost anyone else’s hands, such material would readily make for tepidly precious reading, with nothing about it to grab and hold your interest. No conflict, no threats to the welfare of favorite characters. No pity, no fear (to hark back to Aristotle), no catharsis.

But Wyman makes us care anyway, and by an unconventional process that is nearly mysterious. Without being really sure of themselves, his characters find a degree of contentment and a place for themselves in the universe. That place is at least partly in the hearts and minds of the handful of people they know and a social network that gently embraces and admires them. Mostly, it is in the mountains.

As individuals, his characters often have a tenuous hold on equanimity, and there is a risk of losing the foothold they secure for themselves as they achieve a meaningful, satisfying vocation and the self-assurance that comes with it.

Character. Wyman is fascinated by the building of character, the developmental elements that go into the forming of the heart and soul, sometimes by chance. Most of the novel concerns the maturing of a young man, Fenton Pardee, who leaves Bill Cody’s Wild West show and rides westward across Montana until he happens upon a Blackfeet Indian, Tommy Yellowtail, and persuades him to go into business together, taking dudes into the wilderness, packing in all their supplies on mules.

Pardee is a self-made man, in a Western sense of the word, in that he makes a life out of only a very few things he is sure of. Most important, that he loves the mountains and somehow absorbs wisdom from them. He understands finally that Cody failed in bringing the West he loved to paying crowds back East. The only way to know the West is to actually be there in it. Pardee cannot be more articulate about it than that.

A handsome, taciturn man, he wins the affections of a beautiful, intelligent, and courageous woman, Cody Jo, who comes from the East to take a job as a schoolteacher. The love that springs between them is warmly told.

Tone. For all the perfection of life as it’s lived in Pardee’s strip of Montana basin and range—the perfect blue heaven of the title—a reader becomes aware of a melancholy undertone that builds, as time passes. Pardee gives voice to it when he says, “What makes a guy blue—when he finds himself at home up here—is that the comfort he’s come to know won't stay. He can’t teach it; he can’t pass it on. It’ll be gone. Die with him.”

He is aware of the precarious existence of his mountains as they lose what is wild and pristine about them. Invaded by roads dug across them and holes punched through them, they increasingly feel the pressures of the outside world—The Great Depression, then World War II. The final pages are far from cathartic. Sorrow and fear steal into the narrative instead, as two promising young packers board a train that will take them off to war.

Meanwhile, Tommy Yellowtail is part of a parallel story, which traces the difficulties for Indians whose efforts to find both identity and calling are confounded by whites, partly in the form of missionaries (Black Robes), who are ultimately responsible for the untimely deaths of two young Cheyenne who come under their influence.

Wrapping up. Willard Wyman (1932–2014) was a two-time Spur Award winner, having turned to novel writing after a career in education. High Country and Blue Heaven are currently available in print and ebook formats at amazon, Barnes&Noble, and AbeBooks.
Tweet