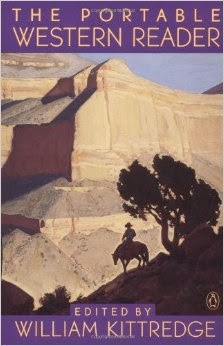 Editor William Kittredge has done a remarkable job of bringing together this great collection of Western writers representing a vast swath of terrain, covering prairie, mountains, desert, and Pacific Rim. At 600 pages, his book is an introduction to over 70 writers from the journals of Lewis and Clark and the collectors of Native American chants and tales to the writers of late 20th century fiction, nonfiction, and poetry.

Some are well known and easily associated with the West: Wallace Stegner, A. B. Guthrie, Louise Erdrich, John Steinbeck, Edward Abbey, Maxine Hong Kingston, Raymond Carver, Larry McMurtry, Ken Kesey. Many are lesser known and deserving of a wider audience, such as James Galvin, Adrian Louis, and Linda Hogan. As someone less familiar with the poetry inspired by the region, I appreciated selections from a wide range of poets, including Montana poet Richard Hugo.

Describing the experience of reading this book is like trying to sum up a year traveling in another country. There are several familiar works: Wallace Stegner’s great story “Carrion Spring,” set on the northern plains during the spring thaw after a horrific winter kill and the opening of Ivan Doig’s Montana memoir This House of Sky.

Plus Terry Tempest Williams’ chilling essay on the rising incidence of breast cancer in her family after above-ground nuclear testing in 1950s Nevada,  childhood memories of homesteading in the Nebraska Panhandle, from Mari Sandoz’ book about her father, Old Jules, and a discourse on water from Gretel Ehrlich’s essays about ranching in Wyoming, The Silence of Open Spaces.

There’s also Edward Abbey’s account of summer work as a park ranger in Utah’s Arches National Monument from Desert Solitaire, a poignant memory of fishing in Norman Maclean’s A River Runs Through It, and a brief scene featuring the joyous prankster McMurphy, later immortalized by Jack Nicholson, from Ken Kesey's One Flew Over the Cuckoo’s Nest.

Add to that a section about a man who stakes a claim on the Wyoming-Colorado border from James Galvin’s memoir-novel, The Meadow, the evocation of a ghost town and the Nebraska prairie in the opening pages of Wright Morris’ novel Ceremony in Lone Tree, and one of the many humorous recollections of frontier cowboy Teddy Blue Abbott, as he remembers his friendship with Calamity Jane.

And there were for me some discoveries. I liked Rick Marinis’ short story “Paraiso: An Elegy” about two couples from El Paso on a car trip, Richard Nelson’s account of deer hunting in Alaska from The Island Within, Raymond Carver’s memories of his alcoholic father in “My Father's Life,” and Larry McMurtry’s demythologizing memories of his cowboy-rancher uncles in “Take My Saddle From the Wall: A Valediction.”

Also, Mary Clearman Blew's harrowing memoir of marriage to a wildcat oilman with a terminal pulmonary illness, from All But the Waltz, David Long’s story of a ranch family’s disintegration, “Lightning,” and John Haines’ description of nightfall in a remote Alaska cabin in “The Stars, The Snow, The Fire.” Among the poets, I found the Hawaiian/LA voice of Garrett Hongo, the dark vision of Robert Wrigley, and the thoughtful ruminations of Montana poet Greg Pape.

Altogether there are voices of all kinds between the covers of this book. You get a sense of great diversity bound together by a vast landscape. There are a few themes that run through most of these selections, which are common to writing about the West: freedom, loss, and isolation. The expansiveness of the West has traditionally permitted a kind of liberation from what is restrictive and claustrophobic in the settled East.

Wrapping up. Kittredge has captured all that, as well as one can in 600 pages. This is a book for anyone interested in the real West, what it was and what it is. As the editor of this anthology, Kittredge has graciously not included anything from his own pen; so I’ll recommend his well-written memoir of growing up on a ranch in Oregon, Hole in the Sky.

The Portable Western Reader is currently available in print at amazon, Barnes&Noble, and AbeBooks. For more of Friday’s Forgotten Books, click on over to Patti Abbott’s blog.
Tweet

Coming up: Willard Wyman, Blue Heaven
Posted by Ron Scheer at 6:00 AM