I’m putting in another day on this cowboy memoir because so much of frontier lore has been packed into it. Today, two notables: Billy the Kid and John Chisum.

Billy the Kid. I mentioned last time that Collinson had encountered Billy the Kid during his trips to New Mexico. Collinson doesn’t admire Billy, but he believes he was treated unfairly as the only one ever brought to trial during the Lincoln County War. He considers much of his alleged criminal record to be implausible hearsay. And if his employer, John Tunstall, had not been murdered, we would never have heard of Billy.
When Collinson met Billy, he was unimpressed and described him years later as “only a boy” and “not much to look at”:
Everything he had on would not have sold for five dollars – an old black slouch hat; worn-out pants and boots, spurs, shirt and vest; a black cotton handkerchief tied loosely around his neck, the ever-ready Colt double-action .41 pistol around him and in easy reach; an old style .44 rim-fire, brass-jawed Winchester.
I should say he was about five feet, seven inches tall, and weighed perhaps 135 pounds. He had no chin, no shoulders, and his hands and feet were small. He needed a haircut. He had a pair of gray-blue eyes that never stopped looking around. (p. 118)
There are various accounts of the death of Deputy Dan Carlyle at the Greathouse ranch outside White Oaks, New Mexico, where a posse found Billy’s gang. Collinson’s version casts Greathouse as the villain, with a record of rustling cattle and selling liquor to Indians for horses. While Greathouse was questioned outside by the posse, Carlyle went into the ranch house as guarantee of his safe return.
Billy had threatened to kill Carlyle if any harm came to Greathouse. Hearing a shot from outside, Carlyle dived for his life through a window, and Billy cut him down, as he’d promised. Collinson says, “I always figured the killing of Carlyle was the most uncalled-for of any of the Kid’s killings” (p. 170).
In fact, it has not been determined whether the posse, Billy’s gang, or both fired at Carlyle. The accounts make a good example of how hard it is to sort fact from fiction in writing the history of events like these. You can find a different account of the incident here.
As a footnote, it’s worth a mention that Collinson had been told there was a demand for shooters in Lincoln County. A marksman with a buffalo gun, he seriously considered hiring on there with either of the fighting factions, at $3.50 a day – until someone talked him out of it. 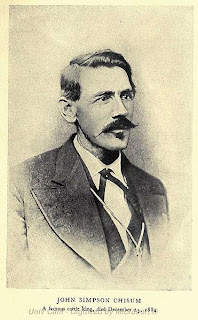 John Chisum. Transporting cattle between the Pecos and the open range of west Texas, Collinson came to know early New Mexico cattleman John Chisum (1824-1884). Chisum was something of a legend, with herds in the tens of thousands, in the midst of hostile Indian tribes and rustlers. Collinson says of him,
Chisum was the rugged type, burned and wrinkled by sun and wind. He was not a tall man, but was firmly built. His manners were simple and honest. His eyes were gray, his mustache black. He never married, and it was often said that his only true loves were cattle, grass, and water. (p. 137)
Collinson adds that Chisum “never owned a pistol. He knew both cattle and men.”
He tells a couple stories about Chisum to reveal something of his character. It took a very rough hombre to cowboy on the Pecos in those years. One of them took exception to Chisum’s young wrangler and shot him dead.
The boy was popular with the other cowboys, and they wanted to string up the killer. When asked why he didn’t intervene, Chisum said he figured his men were as good as any judge and jury at deciding the man’s fate. Besides, a trial would take weeks, and it was time for the fall roundup. The man was dead and buried the next day.
Another time, Chisum’s cowboys decided to strike for higher wages. Only the cook, Beaver, had not gone along with them. Chisum granted them a raise, but told them they’d have to get their own grub from now on – meaning they were as good as fired. They retaliated by subduing Beaver and putting Chisum’s brand on him. Enraged, the cook threatened to kill any of them if he saw them again. He apparently never did. 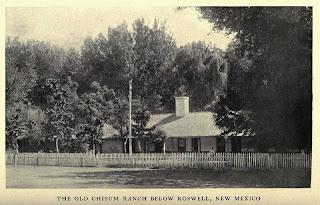 For the record, Collinson makes mention of African-Americans, referring to them as “Negroes” and one specifically in frontier parlance as “Nigger Frank.” This man had been with Chisum since before the Civil War, when at the age of ten he was purchased for $700. He’d been with Chisum for 25 years and had acquired a small herd of cattle.
Alarmed by the ongoing Lincoln County War, he left Chisum and threw in with Collinson’s employers in Texas. “He was the best line rider and horse wrangler I ever saw,” Collinson writes. “He had a great desire to learn to read and write, and I taught him to do so” (p. 145).
He also tells of how a Texas cattleman entrusted two of his men – brothers and former slaves – with $25,000 for safe keeping while they traveled together. He also gave them instructions for how to dispose of the money should anything happen to him. “This shows the loyalty of old-time Negro helpers,” Collinson observes (p. 140). The incident and Collinson’s telling of it also say much about race relations on the frontier.
More next time.
Image credits: wikimedia.org
Coming up: short stories by Eugene Manlove Rhodes
Posted by Ron Scheer at 6:37 AM