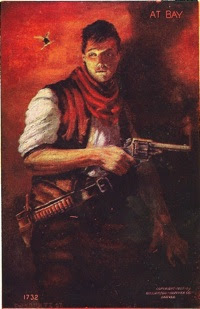 The difference between convention and cliché depends on the reader. One reader delights in the same narrative elements—the conventions—in one story after another. For another reader, those same elements are too familiar and predictable. They’ve become clichés.

Whether you call them one thing or the other, the traditional western novel has more than its fair share. I’m listing a few of them here.

Kill or be killed. Violent death can happen in just about any fictional world. In the western it can dominate a story from beginning to end. It may exist only as a constant threat, or it may materialize in killing after killing.

While many more in the frontier West died of accident, disease, and attack by wild animals, the prevailing cause of death in the western is by gunshot. Entry and exit wounds are often described, and makes, models, and caliber of firearms are typically specified.

Eye-for-an-eye is the preferred form of justice in the western. Thus revenge often drives a man (rarely a woman) to hunt down and kill a villain who has murdered members of his family. Sometimes, the genre’s main reason for existence is the opportunity all this gives for the free use of weapons.

The lone hero. The armed central character has often been thrust alone into the world from an early age. His parents have left him an orphan with no siblings, or he has run away from home to escape an abusive father. Not infrequently, he’s lost a wife and children from disease or violence.

The lone hero connects with other conventions of the western. As a single man beating the odds through grit and determination, he celebrates the spirit of individualism and survival of the fittest. He’s also the drifting knight errant, adhering to his own code of honor as he comes to the aid of others in need. By bravely shouldering the adverse conditions of his life and without complaint, he also shows a kind of courage that adds an appealing layer of vulnerability to his character. 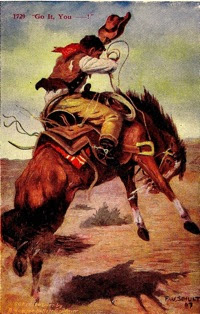 It is a recurring theme, as old as the western novel itself. Writers have said that lack of family connections was a fact of life in the West, so it’s realistic to find it in a novel. Meanwhile, for practical purposes, a hero unencumbered by family simplifies and streamlines the storytelling.

But one still wonders at the popularity of this convention. Writing being a lonely occupation, there may be some of the writer’s own sense of social isolation leaking into the writing. Then there are readers feeling constrained by responsibilities to family and employers who may enjoy vicarious escape in the adventures of the lone hero. Maybe it’s all of the above.

First person narrator. Westerns have a history of being told in the first person. The narrator of The Virginian is an Easterner, much like Owen Wister himself. In the traditional western as written today, the cowboy hero often tells his own story. Some may argue that this gives more immediacy and intensifies the vicarious effect.

The drawback is that it embeds the story in one character’s experience. There’s no opportunity for us to be aware of anything that character does not observe or know. If he is young, as is often the case, his experience can be shallow and limited, his intelligence undeveloped, his awareness superficial.

And few people are really good storytellers. Take pacing as one example. Balancing need-to-know against nice-to-know information is a critical part of storytelling that propels a story forward and holds reader interest. First-person narrators can fall in love with the sound of their own voice and weigh down a narrative with too much detail. Such as, verbatim reporting of dialogue that’s just empty small talk. 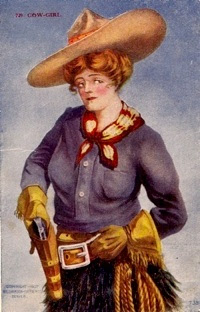 Women. The traditional western typically takes place in a man’s world and at a time when gender roles were rigidly defined. If a woman is to figure in the action, she needs to be able to ride a horse and fire a gun like a man. Otherwise, she is relegated to the background as a “weak sister” and to a few jobs like housekeeping, cooking, and child rearing.

If she has a role that is critical to the welfare of males, it’s her nursing skills, as she is called upon to attend at the bedside of an injured or ailing hero. In The Virginian she even rescues him, finding him near death after an ambush by hostile Indians.

Given the passing of Victorian-style prudery, the presence of prostitution is more commonly portrayed in westerns today. But prostitutes are seldom more than walk-ons, stereotyped sex workers. As imagined by male writers, they are still fallen women or  “soiled doves”—slatterns, victims of violence, or agreeably romanticized.

Romance. The romantic subplot has been a convention of the western from the beginning. The hero’s adventure rarely takes place without the presence of a love interest somewhere in the background. Given the dominant theme of the hero’s individualism, the call of romantic attachment builds a conflict into the story that can make for an awkward ending.

The poet Robert Bly once noted that the marriage at the ends of fairy tales is not literal but symbolic. The wedding represents a blending of male and female character traits, which is the end goal of a person’s development to mature adulthood. The mythic western that ends without a marriage is thus a sign of an unresolved return to adolescence or childhood. 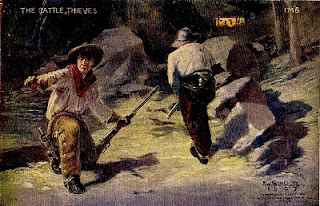 Villains. The plot of a western universally features a villain, and it’s hard to imagine a western without one. His chief function is to act as the hero’s adversary. He represents individualism unchecked by any moral standard and must be stopped, by force if necessary. As bad as the hero is good, he must die for his lack of scruples and his criminal behavior.

A curious convention of the western is the “good bad man.” He holds to a code of honor, but his exercise of frontier individualism puts him on the wrong side of the law. We like him in the way we secretly admire most rogues. Though he may bend the rules, even break them, he has redeeming qualities and charm.

Myth and history. Western fiction diverges in two directions on this point. Careful historical research goes into the work of many current writers. A mythical West tends to prevail in the imagination of others, where incidents are improbable if not impossible.

An example is the loose understanding of western geography and climate. In myth, the terrain and the seasons have a logic that would make sense only in a dream. A blizzard may blow one day and flowers bloom the next. A few days on horseback may take a rider from Nebraska to Montana.

Prejudice. A big cultural shift from the early days of the western is the attitude toward non-whites. Racial prejudice in a western today is often a sign of a character’s ignorance or malice. While disparaging acts of savagery, a hero will have respect and sympathy for Indians.  And he’s likely to voice approval of African Americans, Mexicans, Asians, even—as I read recently—Arabs.

The prejudice dying hardest in the modern western novel is the age-old animosity between Rebels and Yanks. Within the pages of the western novel, the Civil War continues to simmer unresolved. While the Hollywood western made racists and sore losers of the South, western fiction has often villainized the North.

Histoically, one is reminded that the Confederacy left its mark on the frontier, as Texas cowboys drew their numbers from the post-war South. And their influence was felt over the Great Plains as they took part in the trail drives and followed the northward expansion of the cattle industry. There were also sympathizers of both North and South in the western territories even as the conflict raged.

While the modern national myth is that regional differences were settled after the war in the winning of the West, they actually continued, especially for the generation that had lived through it. What is curious is that today the western keeps stoking those old antipathies. In the western at least, it is not time yet to move on.

Wrapping up. The conventions and clichés of western fiction had a lot of life in them. Zane Grey and Louis L’Amour made careers of playing the variations on its several themes. It’s possible for writers today to update them and find still more variations.

However, the more challenging opportunity is to write outside the box of the conventions. Free of them, there are uncounted stories yet to be told and many voices yet to be heard. The notion of “frontier fiction” is a good umbrella term for what is coming next from western writers. It suggests no particular conventions, opens the imagination to new possibilities, and returns us to the form before Owen Wister cast a stamp on it.
Tweet