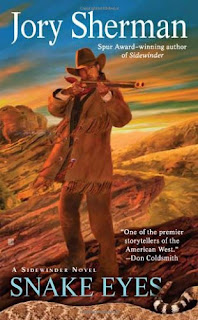 I’ve come to think of the traditional western as existing in a parallel universe. It posits a western landscape peopled by people such as ourselves. But it’s a kill or be killed world. And it grants a man the right to be judge, jury, and executioner whenever he sees an injustice. It asks the question, what if you could just take up a gun, hunt down bad men, and blow them away?

Like many another western, that’s what happens in this recent novel by Jory Sherman. The central character, Brad Storm, is a Colorado rancher who works part time for a Denver detective agency. In this story, he tracks down and kills a murderous cattleman trying to drive a family of Basque sheep men off the range.

By the end of the novel, Storm has actually ended the lives of a fair number of men. They include several cowboys working for the villain, a nasty German by the name of Schneck, or as he likes to be called, “Snake.” Schneck, as we discover, is a kind of proto-Nazi, so evil and heartless that he murders defenseless women and children.

An existential hero. Sherman, one of the genre’s most skillful writers, gives us a hero who is both smart and fast with a gun. He is in full possession of all six senses, some of them heightened, and he is likened to a lone wolf or mountain lion stalking its prey. But he isn’t just a cunning and efficient exterminator. We get a glimpse into his soul—or into the space where his soul might be—and we find it a lonely place of shadows and uncertainty.

In many ways, Storm is an existential man. Like survivors of the war in Europe, whose experience shattered their beliefs in a rational world looked after by a benevolent deity, he doubts that life has meaning. Beyond the present moment, he wonders, what else is there?

We exist to no purpose except to keep existing, moment by moment, before Death finally overtakes us. It may be springtime in the Rockies, the streams full of snowmelt and the grass green with new growth. But it is still a cold and chilly season for Storm.

The Basques hold a funeral for one of their own, to show respect for the dead, but Storm is so inured to loss that he refuses to participate. Mourning should be a private affair, he says. The dead are gone and don’t need anyone’s respect. He also doesn’t care to witness the grief of others, especially the tears of women. And he begrudges the Church’s intrusion on the ritual of burying the dead, co-opting what was originally a “pagan practice.”

Killing other men typically has little effect on the heroes of western fiction. It does not touch them deeply if at all. But Sherman’s hero shows the toll it has taken on his spirit. Pondering the meaning of death, Storm concludes there is no accounting for life but luck—the lucky accident of being born and the unlucky one of having to die one day.

Like a man emotionally wounded by PTSD, he feels like an alien in an alien world. He has violent dreams full of terrors, and he wonders if reality is any less dangerous than the world of his dreams, his days like a night where the sun will never rise. He must occasionally hide his tears, and the only hope of comfort is the embrace of his wife, who is far away, impatiently waiting for his return.

The Basques, by contrast, have beliefs that sustain them despite a history of persecution by others. Traveling like gypsies, they may be homeless, but they do not lack a sense of belonging. One of them tells Storm what he learned from his own father about “the way of the universe.” There is a life force, he says, that one must be guided by, never returning hatred for hatred.

Character. There are natural born villains in the world, and then there are ordinary men who fall under their influence. Wister wondered about that in The Virginian as Trampas lures the Virginian’s friend Steve into a life of thievery. Weakness of character and resistance to honest, hard work are contributing causes in that case.

Sherman’s novel presents the same issue, as Schneck is able to draw his employees into dastardly deeds through intimidation and the promise of payment. The offer of a quick buck and a disregard for consequences turn out to be the easy corrupters of men’s moral fiber—or lack thereof.

As one example, a worker for Schneck, is persuaded to act as a spy for his boss. The information he brings back results in the deaths of many innocent victims. Actually pulling the trigger that is the immediate cause of those deaths, another of Schneck’s men does not realize the horror of what he’s done until far too late. By then a mountain road is littered with bodies.

Curiously, another man refuses to be a drawn into Schneck’s evil schemes. Meeting Storm by chance, Thor Sorenson senses in him a basic decency that wins his trust. And though he might abandon Storm as the risks mount, he sticks by him instead to get the job done. What’s interesting about both men is their uncompromising conscience. They are loners, aliens in a world where every man seems to have his price, regardless of the cost to others.

Further, there’s an odd irony that Storm himself does not seem to consider. He takes the assignment to bring in Schneck dead or alive because his blood boils whenever he hears of an injustice. He also is paid handsomely for his services. Meanwhile, Schneck is driven by his own sense of injustice, the sheep herders taking the rangeland he believes is rightfully his. The two men exist on opposite sides of the same thin coin.

Wrapping up. This is a well written novel, tightly plotted, narrated from several points of view, and characters are well rounded. The narrative style is focused and fresh, often graced with metaphoric flourishes, such as: “The hoofbeats got softer and softer until they faded like audience whispers when the first curtain opens.”

A couple of caveats, however. Schneck is an ugly man, a bully long rotten to the core. You learn things about him that are frankly revolting. Readers should also be warned that there are scenes of graphic and brutal violence. Snake Eyes is third in a series of Sidewinder novels featuring Brad Storm. It is currently available at amazon, Barnes&Noble, Powell's Books, and AbeBooks.
Tweet