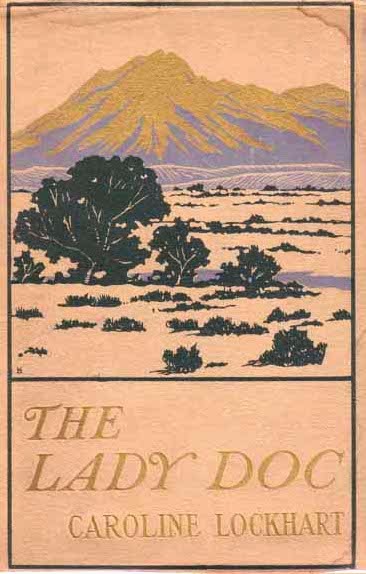 The “lady doc” of Caroline Lockhart’s novel is by no means attractive but she is definitely dangerous. Practicing medicine on the frontier with her only certification from a diploma mill, she is untrained and lacks any ideals usually associated with her chosen profession. She sees it only as a source of income. The lives, health, and welfare of her patients are of little concern to her.

Plot. We first meet Emma Harpe as she is being run out of a Nebraska town after the death of a patient, for which she faces a malpractice suit. Sometime later, she steps off the train in a Wyoming settlement called Crowheart.  Always looking for personal gain, she teams up with a land developer, Andy P. Symes, who is looking for gullible investors in a massive, ill-conceived irrigation project.

She persuades him to grant her the contract for providing medical services to his many employees and workmen. Meanwhile, she befriends his wife Augusta (“Gus”) and makes a nuisance of herself by interfering in their marriage and home life.

With her bluff manner and dressing in masculine clothes, Emma wins the hearts and minds of the local residents, who trust her to practice the medical skills she claims to possess. But she soon makes enemies of two men. One, an Italian frontiersman, whose public singing earns him a nickname, “the Dago Duke.” The other is his friend Ogden Van Lennop, from a wealthy family back East.


Van Lennop, in turn, befriends a pretty girl, Essie Tisdale, who works as a waitress at the town’s best hotel, the Terriberry House. Emma alienates the girl in a way the novel does not specify, suggesting an uninvited intimacy, then punishes her by helping to make of her a social outcast. With her eye on Van Lennop as a potential marriage partner for herself, Emma pushes the disconsolate Essie into marriage with a 70-year-old sheep rancher, then implicates her in the man’s death.

By novel’s end both Emma and Symes are unmasked as frauds, but not before they have done a lot of damage. Essie is rescued by a long-lost relative and reunited after a separation from her true love, Van Lennop.

Storytelling style. Lockhart is a keen satirist. She skewers the self-important and self-serving and delights in making fun of social pretensions among frontier townfolk. Here she introduces Symes:

He was too fond of the limelight—it cheapened him; too broad in his attentions to women—it coarsened him; his waistcoat was the dingy waistcoat of the man of careless habits; his linen was not too immaculate and the nails of his blunt fingers showed lack of attention. He was the sort of man who is nearly, but not quite, a gentleman.

More alarming is her assessment of Emma, who has joined the ranks of “illiterate graduates” of commercial medical colleges, “totally unfitted by temperament and education for a profession that calls for the highest and best, sending them out in hordes like licensed murderers to prescribe and operate among the trusting and the ignorant.”

Her first patient in Crowheart is a girl with a broken leg, whom she refuses to treat until being paid $50 in advance. Later, a cowboy dies after the amputation of his arm following her negligent treatment of a gunshot wound.

The novel is neatly plotted, with a cast of colorful characters. Crowheart’s social events are opportunities for unrestrained farce, as guests attempt to emulate what they construe to be the dress and manners of polite society. Andy Symes’ wife appears at a dance with “a marcelled pompadour, kimono sleeves, a peach-basket hat, and a hobble skirt.”

Wrapping up. Born in Illinois, Caroline Lockhart (1871-1962) worked as a journalist, settling in Wyoming, where she began a career as a writer of western fiction. An opponent of Prohibition, she acquired a weekly newspaper in Cody, and during her lifetime actively promoted the preservation of western culture.

Lockhart wrote several novels set in the West, as well as numerous short stories for the magazines. FictionMags Index lists more than 20 titles of her published fiction during the years 1902 – 1930, many of them appearing in The Popular Magazine. Three novels were adapted to film, including The Dude Wrangler (1930), advertised as “The story of a ‘PANSY’ cowboy—Oh, dear!” A biography by John Clayton, Cowboy Girl: The Life of Caroline Lockhart, was published by University of Nebraska Press in 2007.

The Lady Doc is currently available online at google books and Internet Archive, and in print and ebook formats at amazon and Barnes&Noble. For more of Friday’s Forgotten Books, click on over to Patti Abbott’s blog.
Tweet

Image credit:
Illustrations from the novel by Gayle Hoskins