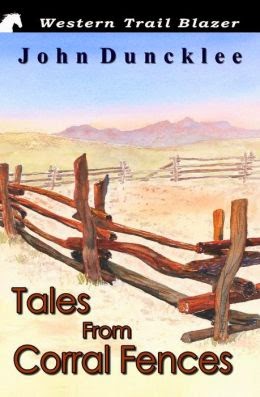 I first came across John Duncklee while reading cowboy and ranching memoirs a while ago. Not a Westerner by birth, Duncklee learned about the cattle business the hard way. While a young man in his twenties, he leased a small ranch south of Tucson for three years during a long, severe drought in the 1950s.

His account of that experience, Good Years For the Buzzards (1994), is a well-written portrayal of a man whose intelligence is pitted against a number of challenges: the unpredictable weather, less than scrupulous stock buyers, the fluctuating markets for both cattle and feed, the vagaries of government programs, untrustworthy neighbors, and the risk of loss as disease and mischance threaten to decimate his herd.

A half century later, that experience informs many of the 24 short fiction and nonfiction pieces in Tales From Corral Fences. Some stories in the collection are a product of the imagination—maybe wishful thinking—as he pictures how a rancher’s life might take the form of a satisfying success story.

“Rancho Sierra Linda” tells of how a man builds a cattle business over the decades of a lifetime, making sensible decisions that keep his operation going through good times and bad. Such a man may even find a sympathetic woman to partner with him, and his attachment to her may go as smoothly as the rest of it.


Some stories are memoir material, as he recalls men like Roy Neal, a mule skinner from Missouri, whom he met while cowboying on a Wyoming ranch, and there is Carlos Vasquez, a Mexican horseshoer, who teaches him valuable life lessons. Then there is his memory of “Silent Mike,” whose business sense handling cattle at a border crossing serves him well until his attraction to women gets him in trouble with his business partner and wife.

An unexpected feature of these character profiles is that these men, after departing life, have a way of turning up for ghostly visits with the author, who finds them surprisingly sanguine as they look back on their lives, whether successful or not. Of Silent Mike, he observes, “Gone were the periods of anguish, the years of searching for wealth in dollars, when he had already acquired a wealth of experience.”

Duncklee’s book might well be subtitled A Miscellany. Its contents certainly cover a range of topics that would qualify as miscellaneous. There is a lesson on how to remove cactus spines, another on how to gentle a horse that has already thrown six determined cowboys, another on how to deal with an angry Brangus bull that has already sent three men for a quick climb to the top rail of a corral fence. The author even includes a groaner of a shaggy dog story set in 1880s Tombstone.

Wrapping up. Duncklee’s book is an entertaining collection of light reading from a point of view not often found in contemporary western writing, which tends to preserve the old frontier codes and mythologies. It offers instead a revealing look into the heart and mind of a man who brings to the romance of western ranching the heart and soul of a levelheaded businessman. While cowboys may still ride for the brand, they generally would not give up their independent life to trade places with the man who signs their paychecks.

As for style, each piece is told in a way you might expect from a casual acquaintance, passing the time of day enjoying the mostly lost art of storytelling. At another time, these stories may well have been described as campfire tales. Early examples I can think of are Stewart Edward White’s Arizona Nights (1907) and Edgar Beecher Bronson’s Reminiscences of a Ranchman (1908).

But I’m more of a mind to think of them as the kind of yarn swapping you hear over beers in a bar with Hank Williams and Willie Nelson songs on the jukebox. They’re authentic that way.

Tales From Corral Fences is currently available in print and ebook formats at amazon and Barnes&Noble.
Tweet

Coming up: Movie review, Jimmy P.
Posted by Ron Scheer at 6:00 AM