Eugene Manlove Rhodes, The Desire of the Moth (1916) 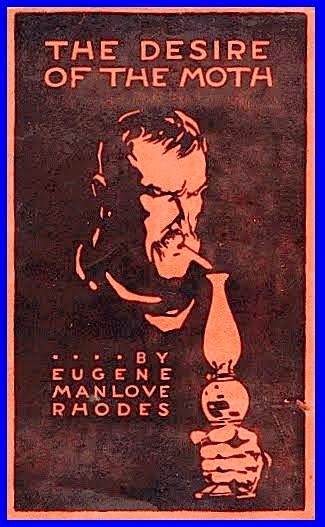 The last time we saw James Wesley Pringle, he was helping his cowboy pals solve the mystery of a friend’s disappearance. That friend, another cowboy, Jeff Bransford, had been kidnapped and was being held captive in Old Juarez, across the river from El Paso. Through the crafty reading of clues requiring a knowledge of literature, they finally freed their friend.

Some time later, in The Desire of the Moth, Pringle is returning to his old home in Arizona and, while crossing New Mexico, stops in a town there on the banks of the Rio Grande. It is the same part of the Southwest where Rhodes’ other fiction is lovingly set: the Jornada del Muerto, White Sands, and the San Andres Mountains, where Rhodes lived during his formative years.


The short novel (call it a novella) begins with a vivid description of that setting:

Close behind, Organ Mountain flung up a fantasy of spires, needle-sharp and bare and golden. The long straight range—saw-toothed limestone save for this twenty-mile sheer upheaval of the Organ—stretched away to north and south against the unclouded sky, till distance turned the barren gray to blue-black, to blue, to misty haze; —till the sharp, square-angled masses rounded to hillocks—to a blur—a wavy line—nothing.

Plot. The entire story of The Desire of the Moth takes place in 24 hours, as Pringle arrives, traveling on horseback, in Las Uvas, a sleepy town where the local sheriff is brewing up trouble to get out the law-and-order vote for what he hopes will be his reelection.

An unscrupulous politician, and careless of other men’s lives, he engineers a plot to entice a cowboy, Chris Foy, to draw his gun on another man, Dick Marr. Pringle foils the scheme, but Marr ends up dead anyway, shot by an unknown assailant—we assume at the order of the sheriff.

Intending to arrest Foy for murder, the sheriff and a posse head out of town into the night and learn that he is hiding in a cave on a high butte. Pringle gets to Foy before them and knocks him out with a punch before he can surrender.

By story’s end, Foy has recovered consciousness and is making an escape while Pringle holds the sheriff, his deputy, and two police officers at gunpoint. Pretending to help them make the arrest has been only a clever ploy. The sheriff is also tricked into admitting to Marr’s killing. Meanwhile, Foy has not only had his life saved. He’ll be fully alive for his upcoming wedding to a pretty rancher’s daughter, Stella Vorhis.

Storytelling style. The novel has much in common with stories to be found in Rhodes’ other fiction. Crafted with attention to detail, it is like fine leatherwork. Dialogue is articulate and neatly layered with wry humor and irony. Readers will find a similar theme in Bransford of Rainbow Range (1913), where an innocent man is on the run from the law.

Rhodes’ characters are self-consciously “western,” their intelligence and understanding of human motive and behavior are intuitive and bone deep. Pringle is a living example, with a finely developed ability to act on a hunch with full confidence that he is correct sizing up other men and situations. Of the men who will not play their hunches, he says, “they haven’t spunk enough to believe what they know.”

Unlike other early writers of frontier fiction, Rhodes lacked a formal education. He was self-taught and read widely. You don’t find Harvard and Yale educated characters in his stories. The “gentlemanly” qualities his heroes exhibit were not learned as members born to a privileged social class.

They have acquired traits of respect, honesty, and fairness by subscribing to a code of the West that measures a man’s worth on another scale—often no more than the strength of his word. Rhodes, who worked among cowboys, freighters, and other frontier laborers, said that the test audience for his writing was the men he knew on the range. He counted his work a success if it rang true for them.

Wrapping up. Drawing as it does on his own experience, Rhodes’ fiction opens a window into a world that one likes to think of as authentically western. It surely stands at the head of a series of excellent portrayals of the West to be found in later novels like Max Evans’ The Hi Lo Country, Larry McMurtry’s Leaving Cheyenne, and Jack Schaefer’s Monte Walsh.

The Desire of the Moth is currently available online at google books and Internet Archive, and in print and ebook formats at amazon and Barnes&Noble. For more of Friday’s Forgotten Books, click on over to Patti Abbott’s blog.
Tweet