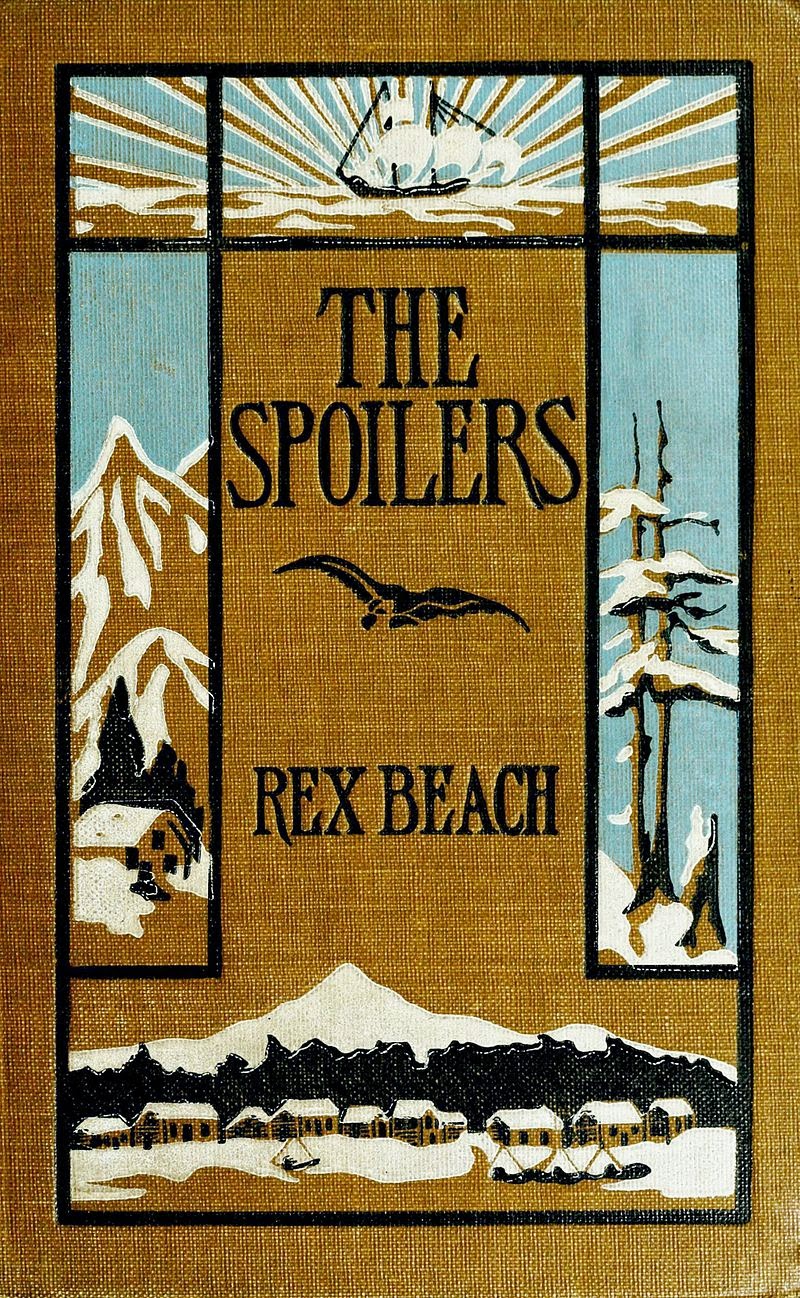 As a writer of popular fiction, Rex Beach hit the ground running with this, his first published novel, set in the gold rush days of Nome, Alaska. Its story was based on actual events and portrays attempts by crooked lawyers, politicians, and a judge to jump claims of legitimate miners already extracting fortunes from the gold fields.

Plot. The central character is Roy Glenister, a young and ambitious man, who has been prospecting for three years with his partner, an older man named Dextry. Their mine, the Midas, is one of the richest in the area. Returning by steamer from Seattle, where they have spent the winter, they learn that their claim is being challenged in court, and until the suit is settled, the Midas is being put in receivership, to be operated by a lawyer, Alec McNamara.

His intention is to make off with all the gold while the dispute remains stalled in legal proceedings. The judge, Stillman, provides the authority to carry out the plan, denying all requests to expedite judgment and refusing any appeals. A U.S. marshal arrives to enforce the law, such as it is, and the judge has troops from a nearby army post for support should they be needed.

Once the miners realize that they are the victims of a plot to steal their claims, they organize as vigilantes to take them back by force, threatening Stillman and McNamara with bodily harm. Glenister, who prefers to avoid violence is caught in the middle. He has fallen in love with Stillman’s niece, Helen Chester, and wants to stay in her good graces.

Romance. A standard theme in fiction of the period, the life-transforming attraction of a man to a young, pretty woman, drives much of the novel’s plot. Out here beyond the fringe of civilization, Helen Chester stands for law and order. Glenister tells her it’s “God’s free country” and the only law that’s needed is courage and a Colt’s. But he offends her when he tells her he subscribes to the Darwinian principle of survival of the fittest. “What I want, I take,” he says and steals a kiss.

Realizing that this kind of behavior is not going to win her heart, he complies with court orders without a fight, believing it will show him in a better light. But she is not persuaded. There is a “reckless energy” about him that lacks self-restraint. She is more taken by the likes of McNamara, whom she trusts as a representative of the law and the colleague of her uncle.


Another woman, Cherry Malotte, has followed Glenister from Dawson and hopes to rekindle a romance that seems to have been passionately pursued there on the Klondike—until he lost interest. She still carries a torch for him while she works as a dance hall girl for the Bronco Kid, a gambler who runs a saloon with games of chance and a theater. Regarding Glenister as a rival, he wants to kill him, but as luck would have it, he turns out to be the long lost brother of Helen Chester, which Cherry uses in a bargain with the Kid to save Glenister’s life.

This is all high melodrama, which sweeps through the last half-dozen chapters of the novel while a violent storm rages ashore along the coastline. Helen is lured to an isolated inn and assaulted by another unscrupulous lawyer, Struve. As she fights for her honor, her attacker is mortally shot by the Bronco Kid, who has been injured in a fall from his horse. Glenister and McNamara then confront each other in a mighty fight that leaves McNamara with a broken arm.

Understanding finally that the scheme to jump the claims of rightful owners, though lawful, has been a miscarriage of justice, Helen makes a discovery about herself as well. In her fight to ward off the advances of Struve, she has pulled a gun on him “in defense of her most sacred self.” Willing to shoot the man, she has seen that self “stripped to its purely savage elements.” United with Glenister on the novel’s final pages, she admits to him that she has witnessed in her “wild rage of desperation” her own capacity for brutality. They are two of a kind, and she will stay with him in Alaska as long as he wants her.

Storytelling style. Though fiercely overwritten by today’s standards, the novel shows a gift for tight plotting, suspense, characterization, and atmosphere. Beach captures with strong visual imagery the setting of the story in the flung-together settlement of Nome, where muddy lanes, streets, and pathways connect a tent city extending along miles of open beach exposed to the elements and lighted by the midnight sun.

Beach also has an arresting way of wringing drama from scenes that grip the senses. Here an armed man dripping wet from the deluge of a storm outside, threatens another man at gunpoint and then slips back into the night: “He felt behind him for the outer door-knob—and turned it to let in a white sheet of rain, then vanished like a storm wraith, leaving a parched-lipped man and a zigzag trail of water, which gleamed in the lamplight like a pool of blood.”

The novel opens with a breathless scene in which Glenister and Dextry help Helen escape from sailors trying to prevent her from getting aboard a ship as a stowaway. In another lengthy scene, Beach describes how a faro game is being played, the dealer working with a marked deck, as excited players crowd the table making bets and counter bets.

Wrapping up. Born in Michigan and growing up in Florida, Rex Beach (1877–1949) was college-educated and an adventurer. He was preparing for a law career in Chicago when he raced off to the Klondike to prospect for gold, and stayed for five years.

He never struck it rich as a prospector, but he turned the experience into best-selling fiction, gaining early recognition as a writer of short stories. Appearing first in McClure’s and Everybody’s Magazine, they were followed by nearly 100 stories and serials in several publications, many of them in Cosmopolitan.

Beach produced numerous novels, set variously in the Yukon, Panama, Florida, and the Texas oil fields. Besides The Spoilers, three other novels were among the year’s top-10 bestsellers: The Barrier (1908), The Silver Horde (1909), and The Net (1912). The Spoilers became a play, running briefly on Broadway in 1907, then a film in 1914 with William Farnum as Roy Glenister:

The film was remade four times, including once with Gary Cooper (1930) and once with John Wayne (1942). Altogether, Hollywood made films of more than 50 of Beach’s titles. His autobiography, Personal Exposures, was published in 1941.

Addendum from a reader. You didn’t mention that this book is the fictionalized life of a very historic character here in North Dakota, Alexander McKenzie. In the early days, pre and post statehood, he was a major player and was known as “The Boss.” After incarceration, he beat it back here and took up with his old ways. Just thought you’d like to know.

The Spoilers is currently available online at google books and Internet Archive, and in print and ebook formats at amazon and Barnes&Noble. For more of Friday’s Forgotten Books, click on over to Patti Abbott’s blog.
Tweet