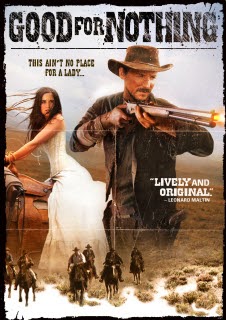 This gritty, sweaty western looks like it was shot somewhere on the endless arid plains under the great open sky of the American West. But think South—way South. Good For Nothing was filmed entirely and convincingly in New Zealand. Its story plays out over a vast, lonely landscape, where its characters are often shown as mere specks crossing vast, empty reaches. The panoramic views evoke the romance of the West at the same time they transport you back in time, in a way that many Hollywood westerns fail to achieve.


The visual and dramatic styles are sharply and precisely realistic. This is a West where men are surly and whiskery, seldom speak, and do not bathe. Long stretches of the film pass without a word of dialogue. Meanwhile, it tells a story in which western movie conventions abound—the lone rider, a smoky saloon, a woman in peril, a pursuit on horseback, gunplay and shootouts. The soundtrack reverberates with oversized western movie music.

The hero of the film (Cohen Holloway) would be a plausible stand-in for one of Clint Eastwood’s laconic heroes. Fast and lethal with a gun, he doesn’t crack a smile, and eyes everything with suspicious scrutiny.  He is the iconic paladin roaming the West alone. But as chance would have it, he currently has company. Along for the ride is an English girl (Inge Rademeyer) he has taken hostage after an explosive gunfight in a saloon.

And we soon learn that he has, alas, an unexpected flaw that provides the comic thread that runs through the film. That being his futile attempts to find a doctor who will cure a bad case of erectile dysfunction. What’s amazing is that this particular detail does not render him any less a man. It is a perplexing and desolate sorrow that accounts in part for his usually grim demeanor.

Then there’s a tone of dark farce underlying it all. While the visuals, the characters, and the soundtrack take themselves dead seriously, there are unexpected comic moments. Two men empty their guns point blank at each other and are such bad shots that both are still standing when their guns are empty. After declining a treatment of acupuncture from a Chinese doctor, the hero is filled with arrows when he stops for a consult with an Indian. Here is the exhilarating trailer:

Besides treating the subject of attempted rape somewhat casually, the film is an enjoyable entertainment. It was written and directed by New Zealander, Mike Wallis. Another New Zealand western of note is Tracker (2010), which was reviewed here a while ago. Good For Nothing is currently streamable at netflix. For more of Tuesday’s Overlooked Movies and TV, click on over to Todd Mason’s blog.
Tweet