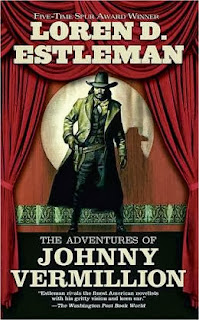 “This is an entertainment,” we’re told midway through this novel, “not a historical tale.” And entertaining it is, not only the story it tells but the way it is told. Estleman indulges a penchant for droll humor and clever wit as he follows a troupe of actors roaming the West and robbing banks. Played against a backdrop of actual historical events and figures, their story also has a persuasive ring of verisimilitude.

Johnny Vermillion is the stage name of the lead actor and brains behind The Prairie Rose Repertory Company. On their tracks is a Pinkerton detective, who has persuaded his boss—Allan Pinkerton himself—to let him leave his desk job and try his hand in the field. Also in hot pursuit is a gang of cold-blooded outlaws, upset that the Prairie Rose is giving them stiff competition.

Plot. It is 1875, a year in that sliver of time between the Panic of 1873 and the Little Big Horn. Johnny Vermillion, son of a Democratic party boss in Chicago, comes by thievery as easily as any young man following in his father’s footsteps.

A small troupe playing multiple roles, the Prairie Rose players are able to carry out a robbery during the performance of a play. One of them slips out of the theatre for the few minutes it takes to hold up a bank employee at gunpoint. You can say they take suspension of disbelief to the next level. The theatre audience, believing their own eyes and what’s erroneously printed in the program, never notices the absence of a cast member.

Philip Ritterhouse, the Pinkerton detective, is not so easily fooled. He has an obsessive attention to details that reminds one of Sherlock Holmes. By reading coverage of the string of robberies in local newspapers, he discovers the odd coincidence of the Prairie Rose’s appearance in ads and reviews on the same pages. Putting two and two together, he sets out to capture them.

Black Jack Brixton’s gang crosses paths with the company in Salt Lake City, when he and his men show up a day late to rob an express office. The money is already gone. During a summer hiatus, while the gang retires to Mexico, the actors disperse to parts unknown, and Ritterhouse sets a trap for two of them by posing as a booking agent. At the start of the next theatrical season, all are fated to be reunited in the dressing room of a theatre in Wichita.

Style.  In this and other westerns by Estleman, humor and irony dominate a playful narrative style. The opening pages evoke the legendary West with a catalogue of the genre’s clichés and conventions. It’s a West that should have been, we are told, but never quite was. And what follows is a clever mix of historical fact and fancy.

Much of the fun is in the narrative voice used to tell the story. Tense switches from past to present and back to the past again. There is occasional use of the second person: a pot of coffee is so strong “when it’s poured you could tie a knot in the stream.” And there’s liberal use of first person plural: “We shall meet him in the flesh presently.”

Generic conventions are acknowledged: “Marshal Fletcher was forty and unpleasantly fat, a fixture in outlaw tales of this type.” In a Denver pleasure palace, “the usual chubby quartet gallops in sparkling leotards onstage.” Meanwhile, common knowledge is noted: “Lazy fat men are commonly dismissed as cowardly and stupid.”


The omniscient narrator makes reference to future historical events and can even cite a photo in a 1970s edition of a Time-Life Book. He can speak knowledgably of Molière and refer without explanation to Famous Players-Lasky, Mountain Meadows, Bernard de Voto, the characters in Twelfth Night, and Poe’s Purloined Letter.

At times he’s not so omniscient, as when he’s unsure whether something happened in November or December. Providing back story for one character, he seems to have access only to hearsay: “He’s said to have rustled cattle in Texas.” On the other hand, point of view shifts among a variety of characters, which allows the narrator to conveniently withhold information, thus contributing to some happy surprises at key moments.

On occasion the narration shifts into what reads like a movie. At one point, we dissolve from a face on a wanted poster “to a real face, strikingly identical, in glorious Technicolor on a screen thirty meters wide.” Elsewhere, “an establishing shot lingers significantly on a plank sign.” The location of a scene shot in sepia appears as a superimposed title: CHICAGO 1844.

Soundtrack music may be specified. “O Susannah!” can be heard at one point. We may get a 1940s-style montage sequence with twirling newspaper headlines. Readers may even find themselves inserted into a scene as when the narrative takes us into a saloon and “we remove our hats” and “pat down our hair.”

Dialogue is sharp and amusing. Here two outlaws discuss the placement of dynamite to blow up a railroad trestle:

“You could tie it to that there strut and just impress the fish, but if you put it in the right place you can blow up Ulysses S. Grant and most of the Republican Party.”

“That’s where you and me choose up sides. I’m a common thief, not no anarchist.”

It is the kind of western story in which death and injury are common but treated comically as farce. Only once is mention of them darkly sobering, when we’re reminded of the thousands of maimed and impoverished veterans of the Civil War now making their way to the West.

Wrapping up. This is a novel that seems to have been as much fun to write as it is to read. It is neatly plotted with a full cast of colorful and believable characters. Estleman comes close to describing his own storytelling style when he refers to Molière’s comedies, “so deceptively featherweight in their grasp of the gravity of the absurd.”

First published in 2008, The Adventures of Johnny Vermillion is currently available in paper and ebook formats at amazon, Barnes&Noble, and at Powell's Books and AbeBooks.
Tweet