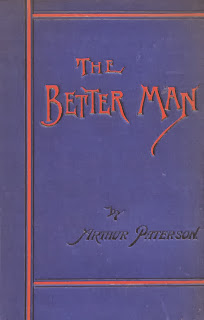 This novel may qualify as the first western, and it was written by an Englishman. The central characters of the novel are also English, and the author writes as someone who acquired a familiarity with the people and customs of the American West. He lived there for a time in the 1870s.

Plot.  Two school chums, who first met as schoolboys at Eton, meet again in a settlement called Toros in New Mexico. Frank Houghton has lived here as a cattle rancher for four years. He is joined by the younger Tom Eckersley, who has left his upper-class family to seek his fortune in America. Against the advice of Houghton, Tom befriends a shady character, Mark Galt. With the help of an unscrupulous judge, Galt and his gang run a town 50 miles away called Carita.

Confident in his ability to judge character, Tom signs a contract that commits him to a year of sheepherding for Galt. When Tom also agrees to persuade his father to invest £1,000 in their ranch, he does not sense that Galt is laying a trap for him. But eventually, he is so enraged by Galt’s duplicity he nearly kills the man.

Apprehended before he can flee to safety, he is thrown in jail and faces attempted murder charges. Frank gathers a small army of cowboys to ride all day and night to rescue Tom, who has been found guilty in a hurried trial and sentenced to be hanged. The rescuers meet little resistance, and the crooks are quickly overwhelmed and sent packing.

Romance. Midway through the novel, Tom’s family arrives in Toros to take him back to England. With his parents is his sister, Edith, whose presence disturbs the already taciturn Frank. He had once proposed marriage to her, and she declined his offer. She is now being courted by a military man, Major Crawford, who arrives in town as well.

Frank is not a happy soul, still suffering from a broken heart. Edith’s arrival revives his hopes, but she remains unaware of his feelings, and hardly knows her own. Belatedly discovering her love for Frank, she turns down Crawford’s proposal of marriage.

When a young telegraph operator observes the major’s abrupt departure from town, he sends word to Frank who returns from his ranch just as the family is about to leave for England. Frank and Edith are united once more, this time confessing their love, and he promises to wrap up his affairs within three months and return to England himself.

Character. Before we meet Frank Houghton, a crusty old stage driver describes him warmly as “a man!” By that he means a trailblazer, “one who cuts a notch in every tree he passes as he walks through life.” Frank has been transformed by his four years in the West. Already a big man at six-foot-three and a half, he has developed a massive chest, his skin has browned, and he has grown a thick beard.

Someone observes that the West has been hard on Frank. Edith tells him he has “a tired, grim look, as if you did not find life very much worth living.” She guesses that it must be lonely with no one to speak to but the men who work for him. He tells her he can bear it, because he’s a man and he has no choice. Meanwhile, he has won a place in the hearts and minds of the local residents. Through his courageous effort, he has helped rid the town of a ring of crooks and outlaws.


Tom, by contrast, is spoiled by his family’s wealth. He prefers his comforts and wants only to enjoy himself and avoid “unpleasant drudgery.” The stage driver who brings him to Toros judges rightly that he lacks the qualities of character needed to survive and prosper in the West. Frank, when they meet, is soon of the same mind.

Besides being a rival for the affections of Edith, Major Crawford is a reputedly honorable man who nevertheless lacks Frank’s stature. The hotel proprietress, Mrs. Hynkins, observes that Crawford is all surface with nothing of substance inside him. In her estimation, Frank is the “better man” of the novel’s title.

Villainy. Mark Galt, an American, does honors as the man we come to fear and hate in the novel. He quickly sizes up Tom as weak and gullible. Flattering him and pretending friendship, Galt easily lures Tom with false promises to make of him an independently wealthy man. Cunning and heartless, he discards the mask of friendship once Tom is well and truly trapped.

Galt’s partner in crime, county judge Joe Dorsey, has the appearance of a slick politician:

Among a company of men, Dorsey was the most jovial companion, and the best talker, a teller of the raciest stories, the funniest of jokers; in the secrecy of business, with the greenbacks in his hand, the cruelest and hardest of existing scoundrels.

He is one of a type of bloodsuckers “who thrive in a lawless community of unscrupulous men, as fungus thrives in a damp cellar.” His trial of Tom Eckersley is a travesty of justice; his intent to see the young man hang is brazenly undisguised.

The West. Much of the story takes place in towns, described as rough and ready settlements. Toros is all flimsy wooden buildings, constructed from imported lumber, ready to burn down at the careless flame from a match. Cowboys gather in numbers at an unnamed saloon. Carita is “full of wild combustible elements.”

While cattle ranching may produce its discontents, sheepherding is far worse. Tom, after some months on the sheep range, suffers from the monotony and the solitude. To Edith, the open range itself is “strange country.” “There is nothing grand or noble anywhere,” she tells Frank. “I don’t think I should like to live in New Mexico.”

Style. The novel has an old-fashioned narrator, who becomes an added presence in many scenes, salting them with asides and observations. As the storyteller, he often makes comments about Americans and Westerners in particular.

Westerners, we are told, are fiercely egalitarian in their sentiments. Major Crawford, when he steps off the train, affronts everyone within earshot by expecting someone to serve him by carrying his trunk to his hotel. Practice in the West is to leave baggage on the platform and let someone on the hotel staff retrieve it.

Wrapping up. Arthur Henry Paterson (1862-1928) was educated in London. He raised sheep in New Mexico, 1877-1879, and in 1879-1880 farmed in western Kansas before returning to England in the 1880s. The Better Man first appeared as a serial in 1889 in The English Illustrated Magazine. Paterson’s literary output was divided largely between cowboy and historical romances. They include A Partner From the West (1892), The Daughter of the Nez Percés (1894), and A Son of the Plains (1895).

The Better Man is currently available online at google books. For more of Friday’s Forgotten Books, click on over to Patti Abbott’s blog.
Tweet