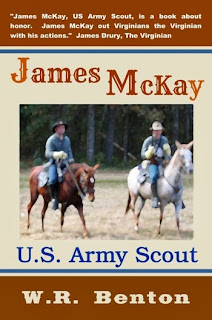 This is a kill-or-be-killed western with a very high body count. Something like 20 named characters die in one way or another, plus a lot of hostile Indians and all but one of a troop of cavalrymen. Death comes in various ways, including fever, infection, torture, and a grizzly attack. There are also flashbacks to Civil War battlefields, carnage, and hand-to-hand combat.

The central character is a veteran of that war. Having served as a young Confederate colonel, he is too much his own man to endure taking orders and dealing with fools in uniform. Along with the occasional PTSD-influenced dream, he has been deeply affected by the war. He has learned more than a few survival skills, as well as a coldly business-like way of distancing himself from death. You are a hard man, someone tells him.

Plot. McKay takes a job on the frontier for the U.S. cavalry, chasing down a gunrunner who has been selling war-surplus repeating rifles to the Sioux. His pursuit takes him across the plains from Omaha to Montana, then south to Missouri. Associated with him along the way are a settler and his wife, a mountain man, an Indian, and a former slave. Given the high-risk nature of McKay’s mission, only one of them survives.

The narrative shifts between pursuer and pursued. The gunrunner is an unpleasant man named Wild Bill. More than half afraid of the Sioux, he keeps them suitably intimidated by demonstrating the killing power of a Gatling gun. When they see it used to wipe out a bunch of mounted blucoats, the Sioux would love to get their hands on one themselves.

One arch-villain not being enough, Benton provides us with a white man raised as a Sioux, who goes by the name of Sun Warrior. A fierce renegade, he has kept fluent in English and by dressing as other white men is able to pass freely among them, gaining their trust before doing them in. (A chilling foreshadowing of a post-9/11 terrorist.)

Character. McKay makes for an interesting blend of frontier ethics. On the one hand, he is a survivalist. He knows how to treat wounds, fevers, and snakebites, and he repeatedly advocates tireless vigilance in the face of threats to life. Out here, he advises, you have to protect yourself and family. Keep a gun handy, eyes open, and shoot to kill.

Meanwhile, he has a live-and-let-live philosophy. He wastes no time dwelling on the past and bears no grudges about the war. The Union was better organized and its troops better supplied. End of story. Bury the dead and move on. He judges another man’s worth regardless of race, creed, or color. Thus he counts Indians and a former slave among the men he trusts.

Rarely moved to emotion, he admits at one point that it hurts him to bury women and children. And he laments the deaths of soldiers whose last days and whereabouts will never be known by their loved ones. But dead colleagues who have risked danger and fought side-by-side with him are buried with a few dry-eyed words said over their graves. Period. No grief.

Women. McKay, we are told, is not used to being around “womenfolk,” and they rarely appear in the story. Only one commands his respect. She is tough and fearless, ready with a gun, determined to make good on the frontier. But even with that strong hand, she is unable to stay in the game.

Wild Bill may enjoy the all-night company of a whore, but McKay seems a stranger to female intimacy. He may notice that another man’s middle-aged wife has the stamina and the figure of a much younger woman, but his is a rare western story, without even a hint of romance.

His only attachment is to a young girl, for whom he buys candy. She has lost both parents and foster parents, and McKay has promised to be her guardian. He would prefer to be responsible only to himself, he says earlier in the novel, but he’s “not that kind of man.”

Caveats. This novel is not for everyone. Readers will enjoy it who (a) don’t care strongly about historical or geographic accuracy, (b) aren’t put off by gruesomely graphic descriptions of torture and death, (c) don’t mind a slower pace that allows for digressions and stories within stories, and (d) don’t care whether characters speak in a modern-day vernacular.

A firmer editorial hand would have shortened this novel by 10% or more. Especially in the latter half, when cutting to the chase would be more effective, the narrative tends to get talky. Repetition is also a distraction. As one example, characters make an unusual number of references to the human posterior. The search function on kindle makes it easy to count them. The word “ass” crops up in conversation 47 times, “butt” 15 times, “rear” nine, “backside” seven, and “buns” once.

Wrapping up. Readers interested in survival skills will find this novel of interest, and a glance at the author’s bio reveals that Benton is well schooled in that discipline. As a veteran of many years active duty, he also creates a believably realistic portrayal of a military setting, from fumbling fresh recruits to commanding officers of various temperaments and degrees of competence.

James McKay, U. S. Army Scout was first published in 2008, and the kindle edition was released in 2013.
Tweet