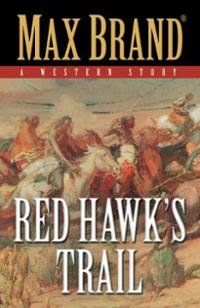 Five Star has been publishing Max Brand westerns in modern editions, three and four of them a year since 1998. This is a new one, the first time in hardcover since it ran as a serial in Street & Smith’s Western Story Magazine in 1925. It appeared there with the title “Fire Brain” and was published under one of Frederick Faust’s pen names, George Owen Baxter.

Plot. Sprung from Faust’s fevered imagination, it tells a complex story of a hard-luck loser, John Sherburn, who is befriended by a man who gives him a second chance. The man, Peter Gresham, owns much of a frontier town, Amityville, in Texas. He is widely respected there for his ongoing fight against a gang of robbers led by an Indian chief, Red Hawk.

Not just generous but one could say magnanimous, Gresham takes Sherburn on as a business partner. His job is to keep order in Gresham’s saloon, a popular hangout for a rough crowd of miners and cowboys. To win their respect, Sherburn talks big and pretends to consume large quantities of whiskey, which are in fact weak tea.

A girl in town, Jenny Langhorne, catches his eye, and she makes little secret of her interest in him. An obstacle between them, however, is that Gresham has already laid claim to her. There’s reason to believe he would kill another man, even Sherburn, who gets too friendly with her.

Another suitor, Oliver Clement, tangles with Sherburn over Jenny, and after some fisticuffs they come to an odd agreement. Clement wants to settle their differences with a gun duel, but Sherburn doesn’t want to kill the young man. So he gets him to agree that the loser of the duel, should he survive, must hunt down Red Hawk and try to kill him.

Sherburn arranges to lose and gets himself inducted into the gang. The gang’s next raid is a stage holdup, involving the dynamiting of a bridge. It’s a suspenseful climax as Sherburn is given the job of lighting the fuse while the suspicious gang leader holds him at gunpoint. When Sherburn returns to town, the separate threads of the plot converge and we learn the identity of Red Hawk.


Style and structure. The story is told in first person, and Sherburn’s is a strong narrative voice. Here is a sample from the opening paragraph:


My life had been a long war from the time I was three years old and fell out of the second-story window trying to catch a bird. There was a tree under the window and that kept me from breaking my neck, but the branches whipped me and cut me up a lot. I still have some scars. That day was prophetic, you might say. Because though I have lived through a good many things, most of them have left their mark upon me.

Kind of a blowhard, he runs his mouth, and his mouth gets him in trouble. Not an immediately likeable character, he is heedless in his actions, and his impulses are rotten.

He is fast with a gun and quick with his fists, but despite the respect that may get him from others, he has no self-respect. And he knows it. He’s his own worst enemy. When Gresham befriends him, Sherburn realizes that he’s never been able to keep a friend before, and you doubt that he’ll be able to keep this one.

The character of Sherburn suits Brand’s style of storytelling, which is headlong, like he’s playing cards for high stakes and trusting to luck. You wonder at times whether he has any more sense than you do of where the story is going. Yet he never quite lets the story get away from him.

A secondary character will suddenly appear out of nowhere, and with their own gravitational pull spin the story onward in some new direction. Oliver Clement is one example. When he insists on a gun duel with Sherburn, he’s just another stock character—the smart kid about to learn a lesson the hard way.

But when Sherburn’s lightning fast draw fails to pull the gun from his holster, the young Clement is frozen with surprise. So stunned that he’s still alive, he wants to pardon Sherburn for any animosity between them. Each wins the other’s respect. Thus Brand turns a stock situation into something unexpected and the story is propelled forward.

Brand doesn’t have to make references to ancient mythology, as he often does—Cerberus gets a mention in this novel—you can tell there’s an intelligence at work, toying with ideas bigger than the western.

The gang of robbers, for instance, is not the typical one, where each man has a place in a pecking order, and the leader keeps them all in line. Brand has dreamed up a gang in this novel that is a working democracy. Each man is the equal of the others and can either go along on a job or stay in camp. All differences are settled with guns, and if you kill another gang member, you are only required to bury him.

Wrapping up. This is high-gloss pulp fiction. Brand grabs his readers’ attention and doesn’t let go. The pacing is consistent, and part of the fun is watching him give imaginative play to the standard conventions of the genre.

Red Hawk’s Trail is currently available in a hardcover edition at amazon, Barnes&Noble, Powell’s Books, and AbeBooks. For more of Friday’s Forgotten Books, click on over to Patti Abbot’s blog.
Tweet