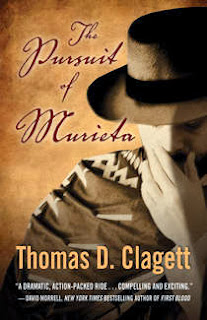 This novel is a lot like a Budd Boetticher western. It has the structure of a movie plot, and much of the action takes place a good distance from civilization. A group of male characters deal with life and death issues like what to do with and what to believe about a man they have captured. And a woman riding with them has an agenda of her own.

Plot.  At the center of the story is real-life Mexican bandit Joaquin Murieta who harried the americanos flooding into California after it became a state. Something of a Robin Hood, he reputedly stole from the wealthy to distribute among the poor. He was a popular hero among the disenfranchised and a pain in the backside of law enforcement, which found itself plagued with not one but several “Joaquins” roaming the state.

The story begins with a scene of unprovoked yanqui violence against Murieta and his wife as they attempt to return to Mexico after an unfruitful sojourn in the California gold fields. Then it jumps ahead to 1853 during a few days in which Murieta is pursued by a contingent of rangers tasked by the governor with bringing him in. They finally run him down in the mountains above San Gabriel Mission.

Lt. Ambrose Quick, the young man in command, has trouble keeping order among his men and deciding whether to believe their captive when he claims to be Murieta. Addie Moody, a saloon girl who has joined them has revenge in mind. Her sister was raped and killed by a man she believes is Murieta. 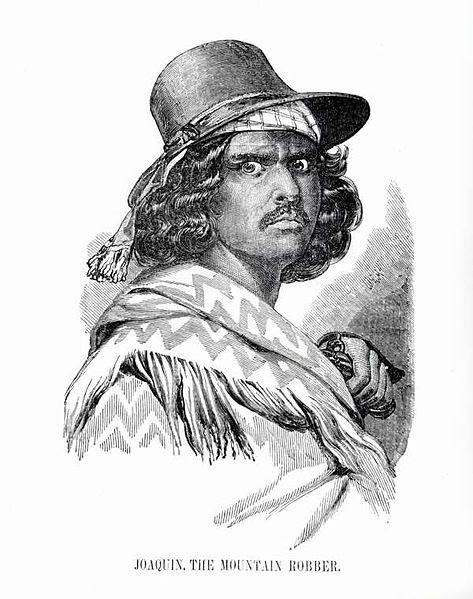 Style and structure. Like a movie, the novel has a single central conflict, pitting two men against each other: Murieta and Lt. Quick. One of them is more admirable than the other, but neither of them is a villain. That honor goes to one of Quick’s men, Ned Needle, who is a hateful bigot, driven by sneering contempt for everyone.

As in a movie, the characters tend to be types whom we quickly recognize. Besides the bigot Needle, there’s a drunk, a self-important sheriff, his featherbrained daughter, and a mysterious Mexican woman. Addie Moody is the outspoken prostitute with more intelligence than any of the men. Besides Lt. Quick, only one of them actually breaks out of the pattern created for them and makes a choice that amounts to a change in their character.

Quick is interesting for starting out a man with aspirations far beyond his capacity to achieve. He wants to be mayor of Los Angeles, but has no qualifications for the job. He hopes that capturing Murieta will sweep him into office. Before the story is over, he makes some difficult decisions and some unwelcome discoveries that both lift and lower him in our estimation.

Many of the characters in the novel are based on actual historical figures. Ten or more of them walk from the pages of history. Maybe most surprising is to find “Judge” Roy Bean running a saloon in the little settlement of San Gabriel. Andres Pico, retired Mexican general runs horses on the verdant ranges of the San Fernando Valley.

Murieta himself is an interesting creation. He commands a reader’s respect as the one honorable man in the novel. He is portrayed not just as a man seeking retribution for injustices against Mexican-Americans. He’s also a religious man, and while he confesses to breaking only three of the Commandments, he is also deeply concerned about the fate of his soul.

Wrapping up. This novel is a quick read. Like a movie, it stays interesting by including a large cast of characters and switching among them for its points of view. Scenes tend to take place in real time, as if they were from a screenplay. The long nighttime scene around a campfire after Murieta’s capture reads like that, with dialogue involving all the characters. I was reminded of The Ox Bow Incident, where the posse debates whether to hang the men they take to be rustlers. Before that, the novel builds a good deal of suspense in the long chase into the mountains.

As a caveat, I’d mention that some readers may weary of Ned Needle’s continual small-minded sniping and the repeated references to Uriah Clegg’s alcoholism. Quirks in both men relating to traumas dating back to Civil War battlefields and the Cherokee Trail of Tears seem efforts to make the two characters more rounded. But that may not be enough for some readers. The novel is more successful at accounting for Murieta’s career of banditry with the violent incident that begins the novel.

The Pursuit of Murieta is currently available for pre-order at amazon and Barnes&Noble.
Tweet

Coming up: The cowboy in early frontier fiction