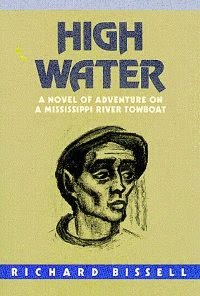 Elmore Leonard once said that he learned to write humor from this novel about Mississippi River bargemen. The plot of the novel is suspenseful, while its cast of 20 or so characters drives eight loads of coal upriver from St. Louis to St. Paul during a flood.

Bissell immerses the reader in the world of these workingmen, all of them nervous in the ever-rising waters and agitated in each other’s too-familiar company. The narrator is Duke, a first mate, who has known many years of commercial transport on inland waterways, a single man with a girl in every port.

There is a well-defined hierarchy of authority onboard from the towboat’s two pilots, Ironhat and Casey, down to the cook, engineers, mess boy, and deck hands. Duke and Jackoniski, the two mates, are often at odds.

Trouble creeps up on the crew in increments as they work their way from lock to lock, the pilots sometimes complaining that the boat is not steering well. Then one of the eight barge loads mysteriously sinks and a deck hand disappears, apparently drowned.


All of this transpires in a nearly nonstop flow of dialogue among men who converse in a deadpan colloquial drollery, with a tone of both boredom and irritability that masks their growing dread that they won’t reach their destination without mishap.

The opening pages, as Duke meets up on shore with one of the engineers, set the tone for what is to follow. Here Duke sums up an engineer nicknamed Grease Cup in four sentences:

Grease Cup looked unhappy, his blue serge suit, maroon shirt and tie to match, unhappy as he always did after a half an hour ashore. He was a big man, with a round flushed face, and his especial pride and joy was a gray felt hat for which he had paid nine dollars one night in Peoria when we were stuck in the ice below town. The hat was a half size too small, which made him look like a greenhorn from Nebraska.

And then the two talk on their way to the boat, and you can begin to hear in their flat, querulous, repetitive banter what Leonard would have heard:

“I don’t suppose you heard no orders,” the Grease Cup said.

“I called in. They’re giving us eight loads.”

“Eight! My God don’t them fools know there is a flood coming down at us.”

“They figure we’ll get through,” I said. “I spose they wanna show River Transit and Marine Barge what big operators we are.”

“I don’t envy you none as Mate. Why we’ll be double-tripping and likely as not smacking bridges all the way.”

“I can think of better pilots than them two. I wisht old man Livingston was aboard.”

“Well he’s dead so what’s the use of talking about Livingston?”

“I can think up better pilots than them two wise guys.”

Tension builds as the river continues to rise and the rain won't stop. Eventually, reaching Quincy, Illinois, in the darkness of night, it’s giving nothing away to reveal what has been inevitable from the beginning. The towboat and barges get into big trouble.

Caveat. A curious thing, in the form of a Broadway musical, upsets the novel’s ending. Bissell’s previous novel, 7½ Cents (1953), had been made into the hugely successful Pajama Game, which ran for over 1,000 performances and was made into a movie.

As Bissell’s grimmer portrayal of life on the Mississippi did not market well beside a romantic, tuneful comedy from the same author, he was persuaded by his publisher to give the book a happy ending, which is not suited to it at all.

High Water is a suspenseful and enjoyable work of fiction drawn directly from Bissell’s years of experience towboating as deckhand, mate, and pilot. For writers, his novel illustrates the age-old advice to write what you know. It’s also an excellent lesson in how to drive both plot and characters with sharply observed, unadorned, and realistic dialogue.

High Water is currently available in print and ebook formats at amazon, Barnes&Noble, and AbeBooks. For more of Friday’s Forgotten Books, click on over to Patti Abbott’s blog.
Tweet