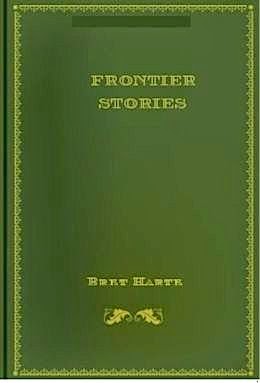 Born in Albany, New York, Bret Harte (1836–1902) was not a Californian most of his life as I have long thought. He arrived there in 1853, just after the gold rush, and left again in 1871. While there, he began a writing career, publishing his best-known short stories, “The Luck of Roaring Camp” (1868) and “The Outcasts of Poker Flat” (1869). In later years, he took overseas assignments in the foreign service, and at the end of his life, he was living in England.

Frontier Stories is a collection of seven short stories and novellas, all set in the 1850s –60s, in or not far from San Francisco and the gold fields. The storytelling style owes much to literary predecessors like Robert Louis Stevenson and Walter Scott, who specialized in historical romance with an element of mystery. For me, two stories held the most interest, both of them novella-length.

“A Ship of ’49.” In this story, a French ship called the Pontiac was run aground on the muddy shore of the Bay during the excitement that flooded the settlement of San Francisco with new arrivals during the gold rush. Warehouses and commercial buildings have sprung up around it. Broken up into apartments, it is now used as rental space for tenants with various degrees of success in often dubious enterprises.


The owner, Nott, a man from Missouri, collects what rents he can, though his tenants are often unable to pay, sometimes abandoning the goods, supplies, and materials that have been part of their trade. A well-to-do businessman wants to buy the Pontiac, and he hires a spy to confirm the truth of what we later learn is not an idle rumor—that there is treasure hidden somewhere on board.

A starving man with a French name, a cutthroat sailor, and trunks of theatrical costumes all figure into the plot as we begin to learn the backstory that accounts for the comings and goings of characters at odd hours of the day and night.

Complicating the mystery is the willfully addled behavior of the ship’s owner, Nott, whose dreamy, book-reading daughter seems to possess the greater share of intelligence between them. Playing all his cards close to the chest, Harte doesn’t just keep us guessing to the end. He deliberately misleads us with a Columbo-like character who is far more clever than he seems.

“The Blue-Grass Penelope.” This story has a similarly entangled cast of characters with intentions that put them at cross purposes. The reader is left to draw the wrong conclusions until a mystery is eventually solved in the final pages.

The Penelope of the title is the wife of a San Francisco capitalist, who discovers that her husband is suddenly bankrupt and has fled town, one step ahead of his creditors and in the company of a wanton mistress. Mrs. Tucker, the abandoned wife, is encouraged by a man claiming to be a friend of her husband to flee town as well to a rancho on the south shore of San Francisco Bay, a property that her husband has left her—or so the friend says.

A reader of Harte stories would know at this point not to believe anything anybody says, and such turns out to be the case here as Mrs. Tucker gradually learns the full truth of her situation. The property has already been given to her husband’s mistress, and she has already sold it to a neighboring ranch owner. The mysteries deepen as we get only vague clues about the whereabouts of Mr. Tucker, who seems to have vanished into thin air.

Storytelling style. Yes, mystery is a narrative element in these stories, but Harte’s chief interest, as in much modern-day crime fiction, is the characters who become involved. Comic but fully baffling are the maneuverings of the ship owner, Nott, who willfully misconstrues the words of others and perpetuates a cloud of misunderstanding that he himself has created.

Meanwhile, Mrs. Tucker is an engagingly complex personality as she actively adjusts to her sudden change of fortune and attempts to make sense of what she is being led to believe about her husband.

Structurally, Harte’s stories bring to mind the so-called well-made play popular at the time. The tightly constructed plots of such plays are typically dramatic like H. Granville-Barker’s The Voysey Inheritance, first performed in 1905. They could also be comic, e.g. Oscar Wilde’s The Importance of Being Earnest (1895).

In them, most of the story takes place before the action of the play, and at play’s end one or more of the characters are revealed as other than they are believed to be. Harte’s stories are also divided into chapters, which are self-enclosed, like separate acts of a play, and comprise long sequences of dialogue between characters.

Women and romance. Women are often pivotal characters, usually strong-willed, fearless, and young. Either by chance or mischance they are typically motherless. As a result, they are independent-minded and smarter than the men who associate with them, including their fathers. “In the Carquinez Woods” gives us a woman who has stabbed her lover and shot the sheriff. Someone describes her as “vicious, reckless, hysterical, extravagant and outrageous.” Her picture has even made it onto the pages of the Police Gazette.

In “Found at Blazing Star,” a woman turns out to be the accomplice of a stagecoach robber. Another woman in the same story, Miss Porter, says of herself that she has always gone her own way and, unlike other women, won’t be found “always in the house dawdling or thumping a piano or reading novels.” In an ironic role reversal, she not only solves the mystery of a man’s murder but courts a shy young fellow too timid to reveal his attraction to her.

Wrapping up. For modern-day readers, Harte’s narrative style will seem “old-fashioned.” His stories unfold at a leisurely pace and are not the kind of narrative you can skim with one eye while multitasking with the other. Harte asks for a wide-band attention span.

Letting him take you where he wants to go, you can find yourself well immersed in a 19th-century sensibility that predates the naturalism and realism that sometimes show up in early frontier fiction. You can see what Owen Wister, Hamlin Garland, Rex Beach, and others were consciously writing beyond. You also get a different West. Harte does not find California particularly striking for its natural beauty. He describes it in mainly generic terms and makes surprising use of the words “monotony” and “monotonous.”

His best-known stories, “The Outcasts of Poker Flat” and “The Luck of Roaring Camp” brought him early fame and over the decades were adapted to film several times.

Frontier Stories is currently available online at google books and Internet Archive and in print and ebook formats at amazon and Barnes&Noble. For more of Friday’s Forgotten Books, click on over to Todd Mason's blog, Sweet Freedom.
Tweet