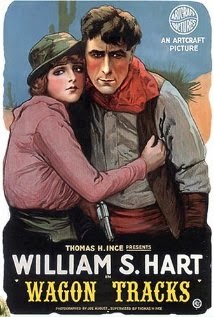 Thomas Ince. When he came to Los Angeles from New York in 1911, Thomas Ince (1882-1924) was a 29-year-old actor and aspiring filmmaker. He was hired on by the Bison Life Motion Picture Company to make one-reeler westerns. The Miller Brothers’ 101 Ranch Wild West show was wintering in Venice, California, when he arrived. Ince hired them, and in one stroke had himself an entire stock company. Next he acquired an acreage in the Santa Monica Mountains for shooting pictures.

Production expanded to the making of two-reelers, the first of them War on the Plains (1912). In Ince’s hands, the scope of the western expanded as well. He wanted to portray the drama of westward expansion and in particular its impact on the native populations. He had empathy for what he saw as the tragedy of the red man. It was an attitude he would share with William S. Hart, a fellow actor he had known in New York.

William S. Hart. In 1914 actor William S. Hart (1864-1946) joined Ince’s company to make westerns of his own. By this time, the market was already becoming glutted with westerns, and Ince had lost interest in them. But he let Hart make two two-reelers, The Bargain (1914) and On the Night Stage (1915). Both did well at the box office, and at the age of 40 Hart began a career as a cowboy actor in the movies.

Hart is often given credit for bringing a depth of new realism to the western. But film historian Jon Tuska argues that Hart’s western setting is little more than a backdrop for a morality drama. We get an example of that in his feature-length film Wagon Tracks, released in 1919.


Plot. In this story of an overland trek during the years of westward expansion, Hart plays a trail guide, Buckskin Hamilton, escorting a wagon train on the Santa Fe Trail. Among the travelers are three characters who have been involved in the death of his brother, a young doctor, who was on his way by riverboat to meet up with Hart.

During a card game aboard the boat, the brother had discovered that a gambler (Robert McKim) was cheating with the help of an accomplice (Lloyd Merton). Interrupting the fracas that ensued, the gambler’s sister (Jane Novak) attempted to prevent the firing of a pistol that one of the men had drawn. The brother, alas, took a fatal shot, and the three then fabricated a story claiming that Novak was the victim of an attempted assault and killed Hart’s brother in self-defense.

On the trail, an accident depletes half the wagon train’s supply of water, and Novak admires Hart’s selflessness as he shares his water ration with his horse and mule and a couple of thirsty dogs. Guilt-stricken, she understands for the first time “what true manhood means,” and admits to Hart that he had been lied to about his brother’s death.

It remains for Hart to determine which of the two men with her did the killing, because she won’t tell. He ropes and drags both of them on a long trek into the desert until they break and admit the truth, that McKim, the gambler, had fired the gun and persuaded his sister to take the blame.

Events take a turn when the wagons are intercepted by a band of Kiowas who are friendly enough but object when one of their number is shot dead by a trigger-happy member of the train. To be appeased, they want the life of a white man in exchange, or they will attack at dawn. When McKim gets picked for that honor after a draw of straws, Hart hands him a revolver and grants him the option to kill himself instead.

When McKim escapes rather than (a) commit suicide or (b) face death by torture at the hands of the Indians, Hart bravely takes his place, saying goodbye to his horse and mule before walking off to surrender to the Kiowa. The Indians, however, have other plans. They pull up camp and are waiting for McKim, surrounding him with their weapons drawn.

In the final scene, the wagon train arrives at Santa Fe, and Hart says goodbye to Novak, politely shaking her hand before mounting his horse. Not yet ready to settle down, he is heading back east to meet yet another wagon train. “The Santa Fe trail,” we are told in a closing title, “where marched the pioneers, building a new Empire in the sand-rimmed wilderness.” Thus the film assumes its role in a Hollywood-endorsed myth of Manifest Destiny.

What to look for. Watching the movie (below), you will find the storytelling in competent hands. Ince, Hart, and director Lambert Hillyer demonstrate how to draw out the emotions and suspense with close-ups and two-shots. Note also the cutting of the scene of the shooting on the riverboat with its inserts of hands struggling for control of the pistol.

The drama intensifies in the crosscutting between this scene and shots of Hart as he travels to meet the riverboat. Not only are his good spirits made to contrast ironically with the unfortunate fate of his young brother. There are cutaways to a light-hearted gathering of blacks aboard the boat singing camp songs: “Weep no more, my lady.”

Hart gets visual drama out of high angle shots of the wagon train as it travels across the arid terrain. When his character forces his two captives into the desert, the three figures are shown in long shot crossing flat stretches of sand that fill the frame. Under the sun’s bright glare, the three men are diminished by the empty expanse surrounding them and menaced by the appearance of thorny, twisted Joshua trees. Once the men are shown in the far distance, disappearing over a low rise, silhouetted in the light of a setting sun.

Wrapping up. Over a period of only a dozen years, Hart made over 70 films. A few are currently available at netflix, youtube, amazon, and Barnes&Noble. While Hart retired from filmmaking in the 1920s, director Lambert Hillyer continued in a long career that ended in the 1950s with TV episodes of Highway Patrol and The Cisco Kid.