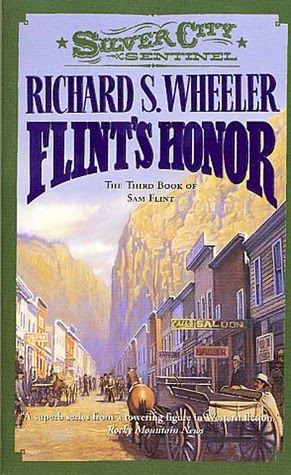 This is the third in Richard Wheeler’s series about frontier newspaper editor, Sam Flint. We catch him this time arriving in a silver mining settlement in Colorado. He’s been drawn there by a cruel editorial in the town newspaper, The Silver City Democrat, which smugly reported the suicide of a prostitute as a victory for the town’s morally righteous and a blow at the corruptive influence of vice.

Flint discovers that real estate is at a premium in town, and he has to settle for rental space in the very apartment where the prostitute took her life, harassed by the sheriff and his thug deputies, and unable to pay the heavy taxes levied by the town on those deemed undesirable.

Plot. Setting up shop as a rival newspaper, The Sentinel, Flint learns that his competitor, Digby Westminster, has the town sewed up, with a monopoly on the news and the advertising revenue. He manages a virtual cartel of local merchants, permitting them to avoid competitive pricing of their goods and services. Local law enforcement is also all too friendly with Westminster, and judge and prosecutor use their influence to keep Flint uninformed of any shady mishandling of public trust.


Flint’s only real friend in town is his landlady, a freethinking and self-educated prostitute named Chastity Ford. He finds her, in fact, over-friendly, especially as she shows up in his rooms at odd hours in a revealing kimono. But she is undaunted by his embarrassment, always teasing him for his unwillingness to unbend a bit in his cleaving to moral rectitude and propriety.

More friends materialize in the family of Marcus Bridge, a furniture maker who is also self-educated and maintains a lending library in his shop. He is the first to break ranks with Westminster and the rest of the merchants.

Rescue for Flint’s struggling newspaper comes in the form of an itinerant typesetter, Jude Napoleon, who devises a plan of attack on The Democrat, which erodes its hold on the town and the mining company’s grip on the miners, who suffer from low pay and hazardous working conditions.

Wheeler provides Flint with a steadily rising tide of obstacles and threats, as he and Napoleon resist the efforts of Westminster to drive them from town. It becomes a struggle fraught with danger, and any reader committed to the ideals of responsible journalism and freedom of the press will find their adrenalin flowing.

Wrapping up. This was the last in the Sam Flint series. Reviews of the two previous novels, Flint’s Gift (1997) and Flint’s Truth (1998), were posted a while ago here at BITS. Wheeler has created a memorable character in Sam Flint, who represents the voice of reason and fair play in the settlements of the frontier, where the press as an implement of civilization came up against an older established order enforced by the gun and outlawry.

Flint’s Honor is currently available in print, audio, and ebook formats at amazon and Barnes&Noble. For more of Friday’s Forgotten Books, click on over to Patti Abbott’s blog.
Tweet