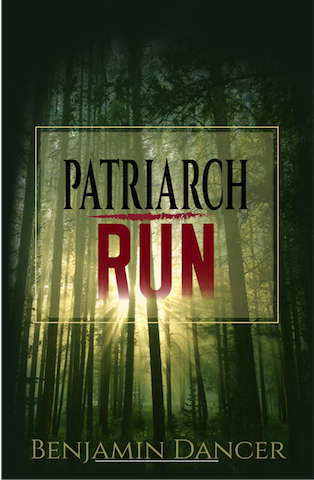 I wasn’t sure what to make of this novel when I was approached by its author to read for a possible review. It sounded to me like YA fiction, though that turned out to be only one element of its active blending and bending of genres: coming-of-age story, cautionary tale, international espionage thriller, and kill-or-be-killed western set in modern-day Colorado.

In an afterword, Dancer says the novel is about fathers. We are given a clue of that already in the title, and though the pivotal character is an 18-year-old boy, it would not be misleading to claim patriarchy and fatherhood as themes underlying the narrative.

Father. So let’s start with the father in the novel. He is in many ways a man of heroic stature that any boy might even romanticize about: skilled with weapons, an operative in the service of national security, his missions cloaked in secrecy. The problem is that he is an absentee father, having mysteriously disappeared, except to materialize on the news from surveillance footage as a suspected terrorist bomber.


Dancer even thickens the mystery by making him the victim of amnesia. He doesn’t know who he is or what he’s done. His son, Billy, is left to draw his own conclusions, which are not sympathetic to his father. The boy has bonded with his mother, who has built a new life after being abandoned by her husband 10 years before.

Focused on family issues, this is a coming-of-age story set in a broken home, where a boy is left to grow up on his own, the protector of his much loved and vulnerable mother and nursing contempt for the man who deserted her. Such a situation would not be out of place in a YA novel—maybe YA for adults, which to be fair puts it in the company of several popular bestsellers today.

Son. As in much YA fiction, the young protagonist has been robbed of his innocence. Dancer complicates this nicely by showing that, unknown to Billy, his father has also lost the idealism that once led him to devote his life to the dangerous business of counterespionage—even at the cost of losing his family.

His choices have also heightened his son’s vulnerability, which the boy counters by sharpening his skill with firearms, and just in time for two other developments: the abduction of his mother by henchmen of what we learn is a Special Forces-trained Mexican drug cartel, and the loss of a father figure and protector of both mother and son, an admirable man who serves as the local sheriff.

So we have a boy at the center of the story being pushed into adulthood as his family disintegrates around him in a wave of violence. Taken figuratively, what we are presented with here is the traumatized terrain of much YA fiction, where teenagers are faced with adult dilemmas that they must master with personal resources they have not yet fully developed, while the safety of home and parents becomes a distant memory.

How this is all resolved I will not spoil by going any farther. Enough to say that the novel is a page-turner, driven by suspenseful shifting of points of view among the central characters: the boy, his mother, and father. Dancer even follows the structure of an action-adventure movie with short chapters and abrupt cuts between them. The prose style is often spare, matter of fact, unadorned. Here is a sample:

Caveats. The narrative is tightly plotted until the final chapters, where Dancer reveals what has been driving the actions of the supposed terrorist, Billy’s father. It’s either a McGuffin (cf. Alfred Hitchcock’s Notorious) or a Doom’s Day Scenario that threatens an ending like Dr. Strangelove, and Dancer has not quite worked out the complexities produced by mixing genres as the novel adroitly does until this point.

Patriarch Run has generated something of a fan club already at goodreads and amazon, and the ending does not seem to trouble anyone who has left an appreciative multi-star review there. But I would’ve liked a conclusion with a greater sense of the ambiguity, parallels, and ironies raised in the novel. Among other things, it calls out for an understanding of patriarchy in the vision of the perilous world its final pages evoke.

Patriarch Run is currently available for kindle and the nook at amazon and Barnes&Noble.
Tweet