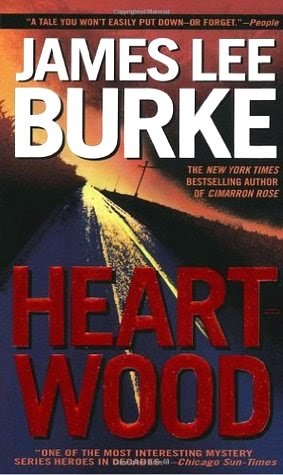 Totally deconstruct F. Scott Fitzgerald’s The Great Gatsby; swap around the characters; add drugs and some Native American magical realism; make the narrator a former Texas Ranger; set the story in the hill country west of San Antonio, and you will have something close to this crime novel from the fertile mind of James Lee Burke.

It even ends with a dead body in a swimming pool and a melancholy closing image much like Fitzgerald’s—not “boats against the current,” but a boy and girl in a customized car speeding into the night, unaware of any rough road that lies ahead:

Esmeralda twisted sideways in the oxblood leather seat and grinned at him, pumping her arms to the beat from the stereo speakers, she and Ronnie disappearing down the highway, into the American mythos of gangbangers and youthful lovers and cars that pulsed with music, between hills that had been green and covered with sunlight only an hour ago.

The Tom and Daisy Buchanan of Burke’s story are Earl and Peggy Jean Dietrich, who live in comfortable wealth outside a West Texas town called Deaf Smith, where the novel’s narrator, Billy Bob Holland, works as a lawyer, typically defending clients in the clutches of brutal law enforcement and a dubious legal system. As Burke’s Nick Carraway, he is the one nursing a long smoldering love for an unattainable boyhood sweetheart, Peggy Jean, who left her blue-collar upbringing to marry into money.


Like Tom and Daisy, the Dietrichs, along with their son Jeff, are carelessly cruel to those beneath them, and expect others to clean up the messes they make. We get a sample of that in the opening chapter as Billy Bob and a hired workman, Wilbur Pickett, are invited to join a lunch with several other guests in the Dietrichs’ palatial country home. Soon after, the novel’s plot is kicked into motion as Earl Dietrich accuses Pickett of stealing bearer bonds from an open safe in his house.

Plot. I have used the word “plot” in its usual sense: a coherent flow of events in some kind of cause-and-effect sequence, adding up to a story with beginning, middle, and end. But Heartwood doesn’t so much have a plot as a series of vignettes that make an overall impression that you can put together just about any way you wish.

You could construct a timeline as a way of organizing it all, but that’s not what you remember about the novel. It’s more like letting your eyes wander over a big historical wall mural in a public building or a tapestry from an old castle. There are luminous scenes, some tense and gripping, some dream-like, some sentimental, some biting and bitter, some best described as fun-house violence. Plot, though, I’m not so sure.

Character. This is partly due to Burke’s characterization of Billy Bob, who is more of an absence than a presence at the center of the novel. He is haunted by memories of failure, his best friend accidentally killed in an engagement with drug smugglers in Mexico, which alternates with his undying devotion to a girl, Peggy Jean, who took his heart along with his virginity when they were teenagers, but who has never stopped grieving the loss of her truest love, a young husband killed in Vietnam.

Billy Bob drifts through this novel like a ghost of a man, lost and rudderless as Fitzgerald’s boat against the current. Still in the grip of his past, what is interesting about him is his failure to grasp how times have changed. The Texas he once knew is a new kind of Wild West, now taken over by drugs and urban gangs. His son, Lucas, working as an oilrig roustabout, seems to take too many risks, romantically entangled with a Mexican-American girl and mixing socially with the wrong people—unlike Billy Bob, who at the same age, kept to his own separate-but-equal world.

Now in mid-life, Billy Bob lives a secluded existence in a big home on a large acreage—a family inheritance—seemingly safe from intrusion. While he may identify with a former rodeo cowboy like Wilbur Pickett, a struggling laborer married to a blind Indian woman, Kippy Jo, Billy Bob carries none of the weight of such a man. He maintains a distance from real adversity and conflict by virtue of his education and profession as a country lawyer.

If anything, he is too nice. He keeps the company of a 10-year-old boy, Pete, the two fishing together and hunting for Indian artifacts. He even has converted from his Southern Baptist origins to Catholicism, and the two go to mass on Sundays. Pete, despite his years, speaks to him with greater honesty and patience than his son, Lucas, asking even more pointed questions about what he sees of the adult world.

Except for his wish to see Earl Dietrich brought down, and to keep his clients out of the merciless hands of the county sheriff and his thug deputies, there seems too little at stake for Billy Bob. His flirtations with Peggy Jean don’t make a reader really care whether he’s successful in winning her away from her husband. Much of the time, she is an enigma anyway.

Style. Burke is a vivid writer and can marshal a large cast of colorful characters. Wilbur and Kippy Jo are enjoyable creations, and you welcome their scenes. Two or three chapters are written with such tightly focused suspense, you can find yourself almost gasping when you get to the end.

One is when Kippy Jo waits alone with a shotgun in her darkened house as a man breaks in with malicious intent. Another involves the drowning death of two drug dealers belted into a Mercedes that gets pushed into a quarry. Dialogue is also sharp and pointed, words unwasted, often abrasive with irony.

Then there are quirks of style that make you wonder what Burke was thinking. For one example, he has a habit of always describing what characters are wearing as they are introduced into a scene. Like this: “She wore jeans and shined boots and a plaid snap-button shirt and a thin hand-tooled brown belt with a silver buckle and a silver tip on the tongue.” After a while, as pages turn, you wonder why these details matter.

Wrapping up. I know James Lee Burke has his fans, who may take exception to what’s been said in this review, but don’t get me wrong. I have copies of other Burke novels and intend to read them. He has a voice and an imagination that rank him with the best writers of crime fiction. I’m especially curious to know what he does with a different kind of story, a different setting, and a different cast of characters.

Heartwood is currently available in print and ebook formats at amazon, Barnes&Noble, and AbeBooks.

Coming up: Richard Wheeler, Flint’s Honor
Posted by Ron Scheer at 6:00 AM