It's Friday again, and I'm taking a break from the "literary" direction this blog has taken to look at early western movies. A while ago I wrote here about the first cowboy star, Broncho Billy Anderson. Today's post is about a director and actor who followed close behind. By the way, credit for all this goes to film historian Jon Tuska whose The Filming of the West covers this subject in depth.

Thomas Ince. When he came to Los Angeles from New York in 1911, Thomas Ince (1882-1924) was a 29-year-old actor and aspiring filmmaker. He was hired on by the Bison Life Motion Picture company to make one-reeler westerns. G. M. Anderson had already begun his successful Broncho Billy franchise, but Ince took western movie production to the next level.
The Miller Brothers’ 101 Ranch Wild West show was wintering in Venice, California, when he arrived. Ince hired them, and in one stroke had himself an entire stock company. Next he acquired an acreage in the Santa Monica Mountains for shooting pictures.
Production expanded to the making of two-reelers, the first of them War on the Plains (1912). In Ince’s hands, the scope of the western expanded as well. He wanted to portray the drama of westward expansion and in particular its impact on the native populations. He had an empathy for what he saw as the tragedy of the red man. It was an attitude he shared with William S. Hart, a fellow actor Ince had known in New York.
Production quickly expanded in 1912 to the making of three-reelers, Custer’s Last Stand and another Indian saga, The Invaders. By this time, Ince had turned over most of the production to others and was saving only the editing for himself. Which, of course, didn’t stop him from giving himself credits for direction and screenplay when a film was released.


A writer at imdb.com calls it a 30-minute film, but this version is only ten minutes, and the abruptness of scene changes suggest that it may have been cut from a longer original. [If the video won't play, give the slide bar under the pic a little nudge to get it going.]

William S. Hart. In 1914 actor William S. Hart (1864-1946) comes into the picture, joining Ince’s company to make westerns of his own. By this time, the market was already becoming glutted with westerns, and Ince had lost interest in them. But he let Hart make two two-reelers, On the Night Stage and The Bargain. Both did well at the box office, and at the age of forty Hart began a career as a cowboy actor in the movies.
Hart is often given credit for bringing a depth of new realism to the western. But film historian Jon Tuska argues that Hart’s western setting is little more than a backdrop for a morality drama. A typical Hart film is about the reformation of a good-hearted bad man and the evils of drink and loose women. All of which reflects the growing public sentiment against alcohol that would lead to Prohibition by the end of the decade.
The Toll-Gate (1920) is an example. Hart plays a train robber who takes refuge in the isolated cabin of a widow (Anna Q. Nilsson) and her young son. Sweetly innocent and trusting, she hides him from the law, not knowing he is a guilty man. Remorse overwhelms him, and he decides to reform his ways – venturing onward to meet his reward at some time in the future life. There’s also a villain, who meets a well deserved end at the hands of our good-bad hero. Contemporary reviews were mixed but are interesting to read for their take on all this. 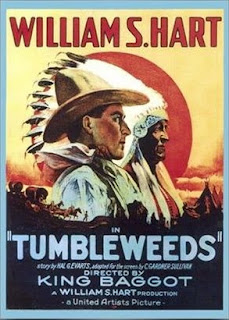 Hart’s career lasted for hardly more than a decade. His last film Tumbleweeds (1925) was a farewell to the screen. Set in the Cherokee Strip at the start of the Oklahoma land rush in 1889, it’s a saga-size western. Hart plays a cowboy who falls in love and is confronted with obstacles as he tries to start a ranch. It’s re-release version after the introduction of sound has a lugubrious introduction by Hart who seems eternally saddened by the passing of the West.
Source: Jon Tuska, The Filming of the West, New York: Doubleday, 1976.
Further reading: A lot more on William S. Hart at Laurie’s Wild West
Bill Hart’s Pinto Pony
The William Hart House
Picture credits:
1) Miller Brothers 101 Ranch Wild West Show, 1913, sideshowworld.com
2) DVD cover, Tumbleweeds, amazon.com
3) All other photos from wikimedia.org
Coming up: More on Eugene Manlove Rhodes
Posted by Ron Scheer at 6:53 AM