This is the film based on Eugene Manlove Rhodes’ novel Pasó Por Aquí, first published in 1926. In that novel, a young man robs a storekeeper and while on the run finds a Mexican family dying of diphtheria in an isolated cabin. He nurses them back to health and is found there by Pat Garrett. 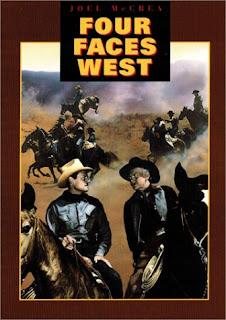 The film is an interesting example of how a story that originates in print is bent to fit the expectations of a Hollywood audience. You can begin with the title. It morphs from Spanish to English, and it’s not even an attempt at translation. Meanwhile, Four Faces West is a generic title that doesn’t fit the story. There are several possible combinations of four characters in the film, and they’re all heading south, not west.
The hero. Made today, the film would star a younger actor as the central character, Ross McEwen. Which would be a lot closer to what Rhodes had in mind. His McEwen has a young man’s impulsiveness and high-risk resourcefulness. He robs the storekeeper because he needs the money, but he throws it all away when the posse is about to nab him. That he has the moral integrity to stop and help this sick family has to come as a surprise.
Joel McCrae’s portrayal is more in keeping with a 1940s Hollywood cowboy stereotype. At 43, McCrae plays him as a sincere guy, down on his luck. He robs a bank to get a $2000 “loan” to send to his father. We are to recognize him as a basically good man driven to a desperate act. Later, when he wins money playing cards, he wants to begin repaying the “loan.”
The film’s outcome depends on whether he stops running from the law and turns himself in. This would prove that he’s not a coward and not a criminal. In Rhodes story, on the other hand, he’s already proven this by giving up his run for the border to save the Mexican family.
He has no further debt to pay society, and Pat Garrett as the moral center in the story, recognizes this. While the film ends with Garrett (Charles Bickford) taking McEwen into custody, the original story ends with the two men gathering firewood together and not acknowledging each other’s true identity. A nurse from the East learns that this is the way of the West.
Romance. Hollywood likes a love story, and the writers have injected one here. The nurse Jay (called Fay in the movie) who appears only at the beginning and end of Rhodes novel, becomes a central character in the screen version. She is played by Frances Dee, Joel McCrae’s wife in real life. Bitten by a rattlesnake before jumping on a train bound for El Paso, McEwen is treated by Fay. And the screenwriters have them travel to Alamogordo together.
Along the way, she gets to like him but begins to suspect that he is the man wanted for bank robbery. There’s a big reward out for his capture, dead or alive. In true Hollywood style, his attraction to her keeps him from hurrying on to safety in Mexico. He stops for a time in Alamogordo, but Pat Garrett and the rest of the posse eventually track him there.
Jay/Fay plays the role often given to women in westerns. She pleads with McEwen to do the reasonable thing – in this case, to stop running and turn himself in. “You’re not a criminal,” she says. “But if you don’t stop now, you will be.” Unpersuaded, he gives her a ring and a kiss from horseback before leaving town.

Not content to retreat to the sidelines, she jumps on a horse and races after him. When she catches up with him, she pleads some more and finally plays the “coward” card. And then she’s gone, though she hasn’t quite given up. Encountering Pat Garrett, she makes the same argument to him: “This man wants to do the right thing.”
Garrett says simply what a Hollywood western sheriff has to say: “He’s broken the law and it’s my job to bring him in.” Even though western movies may let a woman into the action by way of romance with the hero, as usual she must yield to the will of the men. She can talk all she wants. They do what they have to do.
Back to the novel. At this point in the story, the screenwriters follow the novel more closely. Escaping into the desert wastes of White Sands, McEwen sets his horse free and saddles a steer to make him harder to track. He eventually arrives at the isolated cabin with the sick family, nearly departs on the horse he finds in the corral, and then is stopped by the sound of a crying child.
When Garrett and his deputy finally arrive, there are the expectations of the Hollywood audience again to satisfy. While McEwen says his name is “Slim,” Garrett figures out who he is and eventually persuades him to surrender. He’ll escort him safely back to face judge and jury and put in a good word for him so he gets a light sentence. Here the Hollywood code trumps Rhodes’ Code of the West.
As in the novel, Jay/Fay shows up at the cabin with the doctor from Alamogordo. In the novel it’s the first time she’s seen McEwen, and she is attracted to him as a “real man,” but we’re a long way off from any romance, if there’s ever going to be one. In the film, of course, her arrival is the beginning of a reconciliation with the man she’s last called a coward. In their final scene together, there’s a big Hollywood kiss.
What would Rhodes have thought of the film? Good question. He wouldn’t recognize the love story, but from his other novels, we know he enjoyed writing boy-girl romance. His treatment of it, however, was all sparkling wit and nuance. We hardly get any of that here.
Still, the screenwriters do find a way to fit some of Rhodes’ attitudes into the script. They make something interesting with the character of Monte, the Mexican-American gambler from the novel. Monte acts as a kind of “shadow” for the hero throughout the film. He befriends both McEwen and Jay/Fay and gets opportunities to voice the code of the West as Rhodes would have understood it.
As in the novel, Monte is the one who explains the Spanish inscriptions at the foot of El Moro. In the closing scene, he is a stand-in for Rhodes. He says, the name of Ross McEwen also belongs there, inscribed as the mark of a brave man who “passed by here” in a life journey of his own, undaunted by what lay ahead.
So Rhodes’ own estimation of his hero gets articulated in the last lines. But it’s not quite the West he knew either. Modified by the Hollywood conventions of the 1940s, it’s all a bit too tamed by standard-brand morality.
Further reading:
Review of Rhodes’ novel, Pasó Por Aquí
Picture credits:
1) DVD cover, amazon.com
2) Bickford and Dee, fan.tcm.com
3) Photo of Rhodes from Journal of the Southwest, 1967
4) Inscription at El Morro, nps.gov/elmo
Coming up: Stewart Edward White's Arizona Nights (1907)
Posted by Ron Scheer at 6:19 AM