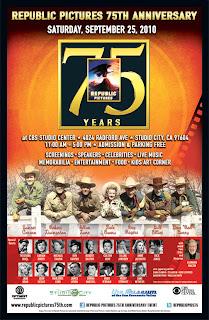 This is a special edition of Buddies in the Saddle with pictures from a day at the Republic Pictures 75th Anniversary at CBS Studios in Studio City, California. Studio City is a short hop over the Sepulveda Pass to the San Fernando Valley from where I live on the Westside. (Short hop, that is, if the traffic is moving on the 405 and 101 freeways.)

It's a big operation covering an area of many city blocks. It's located in a residential neighborhood and bounded by the Los Angeles "River" on one side and busy Ventura Boulevard on another, where Laurel Canyon comes down out of the Santa Monica Mountains.

Inside the gates, there are huge sound stages and a small cluster of tree-lined streets with names like My Three Sons (see map). Someone with a knowledge of movie history could probably tell you what movies and TV series the houses there have appeared in.

I arrived not long after 11:00 a.m. when the gates opened. By that time there was already a long line waiting to get through security. It could have been LAX, but few people had any "carry-on" so it wasn't a long wait. People, many of them, came dressed for the occasion in cowboy hats and western gear. Emerging from the parking garage, we found ourselves on Gunsmoke Avenue, where the vendors were lined up.
It may look like a warm southern California morning, but it was actually already hot. We're currently in the midst of socal's version of Indian summer - triple-digit highs. Walking on I found one of the several outdoor demos. This is stuntman and horse trainer Jay Rockwell and one of his horses, Bodie.

Jay and his wife Maria (who, they say, met on the set of Deadwood) run Hollywood Trick Horses. Next up the way was a trick gunslinger, Joey Dillon, with a routine that had a big crowd laughing and applauding. Clearly an example of someone who as a young man had too much time on his hands. (See Bobbie's comment below for more info about him.)

The banner across the back of the photo is for the Museum of the San Fernando Valley, one of the sponsors of the event. Incorporated in 2005, the museum has set for itself an energetic objective, to preserve the culture of a geographical area with a population that would make it the fifth largest city in the U.S. - if it were not already part of another city, Los Angeles.

Opposite the performance areas were several structures looking like houses in Anytown, USA. Here a security guard is stationed to discourage visitors from looking inside for one of their favorite TV families.


By now I'd begun finding people to talk to. A conversation started with Ed Boyle below who was putting on one of the finest pairs of high-top cowboy boots I'd seen in a long time. Calling himself, "just a cowboy," he spoke of growing up on a family ranch in southern California, riding rough stock in rodeos (where he knew Slim Pickens), and working in western movies as a cowboy extra.

Says he rarely had lines in Hollywood movies, but after being featured in a commericial shot in Spain, he is famous in Europe - now known there as Cash Cow Hank, who's learned that online investing is more profitable than rustling cattle. Here he is with his wife Jo, who runs a mobile western wear shop that sets up at events like this one.

Next door to them I found none other than Laurie Powers of Laurie's Wild West, who was sharing space in Bobbi Jean and Jim Bell's booth. Their western gear store Out West is located in Newhall, California, and they also have an online store. Here are Laurie and Bobbi.

Bobbi had some featured guests from the entertainment world, including these two guys, Troy Andrew Smith and John Bergstrom.

Troy is a western writer. His new book, Radersburg Gold, is set during the gold rush in Montana. He's from Acton, California, and you can find out more about him at his website. John Bergstrom is a western singer-composer from Saugus, California. He's with the Western Music Association, who also had a booth at the event. I got to hear John sing later in the day. He has a nice feel for the tradition of western song. Here's more about John.

Someone I knew from the movies was also at the Bell's Out West, actor Peter Sherayko. Here he is taking advantage of the shade and striking a pose with a cigar .

He was signing autographs on 8x10 glossies of himself as Texas Jack Vermillion in Tombstone. It's a wonderful performance in a great role, and I've read somewhere that much of the part was cut to reduce the film's length. Still very much involved in movie production, he runs his own company Caravan West. His website, by the way, is chock full of historical information about the Old West.