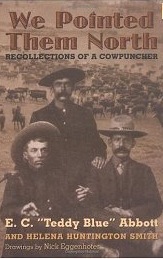 This is an as-told-to memoir of the early years of a cowboy who was born in England and grew up in Nebraska. E. C. "Teddy Blue" Abbott (1860-1939) drove cattle along the western trails into Montana, eventually settling there, and worked for several cattle owners, all during the 1870s and 1880s.

His story covers that brief period of time when the West was open range, before settlers began putting up fences. It's a story told in the 1930s by an old man to a woman from the East, Helena Huntington Smith, who had the presence of mind to capture his life in the printed word before his generation had passed completely.

Teddy Blue, as he was called, was something of a rip-tearer in his youth, living up to the wilder stereotype of rangeland cowboys, by his own account. On the one hand, there is the fierce recklessness of herding cattle, which through accident and various mishaps took the lives of many young men. And then there is his life in town, befriending prostitutes, drinking hard, shooting up saloons, and on occasion riding his horse indoors.

His favorite job is working as a "rep" for cattle-owners, going to the regular roundups where cattle were sorted and branded, requiring him to retain a vast knowledge of brands used on the range and other markings. For a while, he works for stockman Granville Stuart, who headed up a vigilante effort that significantly reduced the number of active cattle rustlers in Montana. Stuart eventually becomes Abbott's reluctant father-in-law, after the young penniless cowboy takes a shine to one of his daughters.

The book rambles back and forth in time as Abbott more or less free-associates for Smith. And while scholars may question the accuracy of his memory at points, he was easily one of the more widely known figures of the old West for his personality and antics, not to mention having befriended the likes of cowboy artist and writer Charlie Russell, as well as Calamity Jane. He even crossed paths with Teddy Roosevelt.

His story makes an enjoyable read and evokes with feeling those early "innocent" days of an adventurous youth lived when the West was young as he was. His admiration for the Cheyenne Indians is, he admits, unusual for a white man of the times. And though they were both the best and worst of times (e.g., the crippling winter of 1886-87), he shares with Charlie Russell a nostalgic belief that they were the good old days, the likes of which haven't been seen since.

A classic cowboy memoir, full of stories and yarns, social history, frontier customs and mores that make that time come alive with an immediacy and intimacy that are seldom found in records of the period.