Last time we considered the cowboy world of the characters in Andy Adams’ novel and the absence of women and romance. This time, after a look at how the novel regards nonwhites on the open range, we’ll wrap things up. Three of the images below are from the 1905 edition of the novel, by illustrator E. Boyd Smith. [As usual, click them for a larger pic.] 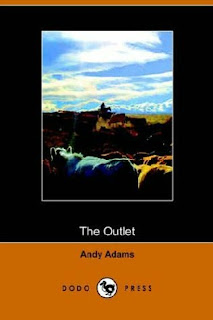 Diversity. Like other novels of this period, race has a way of showing up in the storyline. Along the way, Quirk and his men encounter two herds in trouble. One has an all-black crew with a “darky” foreman. They have become disorganized and are unable to take their herd across a river. The Texan cowpunchers, showing their Southern roots, opine that while blacks are good workers, “it ruins one to give them any authority” (p. 87). It takes a white man to get them to follow orders.
Something similar happens with a white rancher from Wyoming whose Mexican crew has come unglued when one of their compañeros gets killed by lightning. After a proper burial, the solution this time is to give the Mexicans a pep talk in Spanish and then have the white rancher travel with Quirk’s bunch. The point this time is that it takes a Texan to know how to handle Mexicans. Quirk makes the following observation:
The inferior races may lack in courage and leadership, but never in cunning and craftiness. This alien outfit had detected some weakness in the armor of their new employer, and when the emergency arose, were ready to take advantage of the situation. Yet under an old patron, these same men would never dare to mutiny or assert themselves (p. 168).
Although not liberally, the n-word gets used in the book. So does the word “white,” meaning trustworthy, intelligent, respectable, as we’ve seen before. Quirk’s boss Lovell says:
We’re strangers here, and we want to make a good impression, and show the public that we were born white, even if we do handle cattle for a living (p. 314).
On one occasion, the wrangler gets to talking about the ignorance of Cajuns. And on the subject of Indians, the cowpunchers make a distinction between the “civilized” tribes in Indian Territory and what they call “blanket Indians,” who stubbornly resist assimilation. Though the trail crosses through Indian Territory, they don’t encounter Indians until crossing the Niobrara in northern Nebraska.
This meeting is more or less cordial. The Indians, Lakota from Pine Ridge, are gathering and drying wild fruit. The cowboys share some tobacco with the men, and while Quirk considers them “tall, splendid specimens,” he finds the women “nearly all of one stature, short, heavy, and repulsive in appearance” (p. 244).
Wrapping up. Glancing back at Owen Wister, we notice that we’re in another kind of West. It’s a West of real working cowboys. The Virginian is never given a job as demanding as trailing a large herd of cattle for several months.
The issue of character is a big one for both writers, but Wister’s cowboy hero faces a different kind of challenge. He has to outwit his nemesis Trampas and finally to face him in a gun duel. That shows a clever use of intelligence and the courage to risk being shot – and thereby proves his manhood.
The strength of Tom Quirk’s character lies in the intelligence and courage required to assume the responsibilities of a trail boss. Though there are villains in this story, they’re not lowly rustlers and horse thieves. They’re brazen crooks, with lawyers and powerful friends to stand up for them and do their dirty work. And unlike Trampas, they exist as shadowy figures we never see up close. There’s no dealing with them by intimidation (“Smile when you call me that”) or a gunfight at sundown.
Quirk’s worth as a man comes across also in the way he wins the trust of his employer and comes to his aid. When he and a partner attempt to prevent the rivals’ herds from getting to the Fort by the contracted delivery date, it’s all part of the job.
This involves some quick thinking and an ability to win friends and influence people. He knows how to build alliances with a few friendly drinks in the saloon. He has social skills that are never required of the Virginian, who seems often to get by on his good looks and boyish charm.
What we don’t learn from Adams is how all this manly character would fare in the company of an attractive, available woman. He doesn’t give us a clue. The story takes place in a world from which marriageable women have been banished. And Quirk seems perfectly happy with that.
True, there’s no opportunity for a tag-along sweetheart on a trail drive. But at the end, when his employer asks him to stay on in Dakota and manage his ranch, he accepts the job with only one reservation – that he’d prefer spending the winter in Texas, where the weather is warmer. Not because a sweetheart is waiting there for his return.
Finally, for the reader who wants to know about the real Old West, this is a novel that tries to tell it like it was. Adams wrote several other novels, and I hope to spend more time with them before I’m done.
Posted by Ron Scheer at 6:17 AM